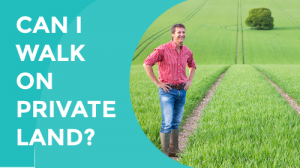 The UK is laden with acres and acres of lush green fields, pastureland, hills and mountains, but the bottom line is that all of the above, including miles and miles of tracks, pathways and bridleways usually cross land that is owned by someone.

The words “public footpath” means exactly that – public, however, if you do find yourself wandering in unknown territory that is private land then you could find yourself in hot water (with the owner, not the wet stuff!). . So, who does have the “right to roam” across open land, and what rights do the landowners have when it comes to stopping the public from accessing their property?

Note: The extract below has been taken from Rowberry Morris Solicitors website – a very helpful site.

You don’t have automatic access to walk across agricultural or other private land, even if you think doing so wouldn’t cause any damage. However, under the Countryside and Rights of Way Act 2000, there is a ‘right to roam’ over certain areas of land. These include:

This alone should be more than enough to keep even the most ardent roamer happy for years, but there are also areas of land that you cannot simply wander across, including some land that may be shown as open access land on a map, but remains private. This is known as ‘excepted’ land, and the only way you can roam across it is to use dedicated footpaths, bridleways and rights of way. This includes a lot of agricultural land, fields and paddocks where racehorses are kept, and military land (especially if there’s a red flag flying, unless you want to try dodging some live ordnance coming your way).

Rebecca and I ended up in a military zone by accident whilst hiking a section of the South West Coastal Path in Dec 2021 – it was actually quite scary as we kept seeing signs for “Danger Zone” every few hundred yards. We ended up having to climb a fence and enter a golf course to get back on track. (Which had it's own challenges with a big rucksack on your back!).

Your responsibilities as a roamer

The right to roam lets you go onto open access land for the purpose of open-air recreation (such as walking or hiking). It doesn’t give you the right to then do what you want on that land, or cause any damage to hedgerows, fences or walls. In the UK, it also does not give you the right to ‘wild camp’, although, in Scotland, Dartmoor and some places in the Lake District the laws are different. If you breach any conditions (including allowing your dog to run free around livestock), then you can be treated as a trespasser. This will mean the landowner has the right to stop you from going onto their land (even if it’s elsewhere) for 72 hours after you’ve been asked to leave.

You’re also bound by a certain number of restrictions, even on open access land. So, you’re only allowed to access the land on foot (unless you’re in a wheelchair), and you don’t have any right to make a fire (again, we’re back to the question of ‘wild camping’). You should also avoid contact with livestock, and make sure that you don’t have anything with you that could indicate you intend hunting, shooting or fishing on open access land without permission. This could result in you being prosecuted for poaching.

In the last couple of years, the popularity of ‘wild swimming’ (swimming outdoors in natural ponds, rivers, lakes and the sea) has exploded. However, there are restrictions there, too. You cannot ‘wild swim’ in non-tidal water, so even if that lake on someone’s land looks absolutely perfect for a dip, you must ask the landowner’s permission first. They may say yes, on the clear understanding that you do so at your own risk, but they’re more likely to decline for fear of being held accountable if anyone is injured or even killed.

What rights do the landowners have?

It can be very difficult to stop people from accessing your land if there are footpaths and public access points going across it. You can restrict access for up to 28 days a year, which is often the case during lambing season or at critical times during the year so that livestock are not at risk of being disturbed. It is also possible to restrict access for dog walkers over moorland where game birds are bred and shot.

However, what you cannot do is put up ‘No Trespassing’ signs on access land, or any sign that’s designed to deter the public from walking through access land. You cannot also use threatening behaviour or deliberately put the public at risk, for example by putting up barbed wire at public access points.

The sheer number of footpaths that criss-cross this green and pleasant land is a fabulous reason for lovers of the outdoors to strap on their boots and get roaming. But what you need to remember is that those seemingly empty fields and miles and miles of tracks, pathways, bridleways and trails usually go across land that actually belongs to someone. While public footpaths are exactly that – public – wandering across private land could land you in hot water for trespass. So, who does have the ‘right to roam’ across open land, and what rights to the landowners have when it comes to stopping the public from accessing their property?

We have such a huge variety of footpaths and bridleways in this country that we really shouldn't feel the need to walk on private land. The issue I have is when farmers block public footpaths or fail to re-instate a footpath after they have ploughed a field. I can not count the number of walks that I have scoped out, only to find that a route that looks perfectly fine on a map is completely non-existent in real life.

Have you ever trespassed either knowingly or unknowingly? I urge you to share your story in the comments below.

Posted in Blog, Random Thoughts
← What are the benefits of a daily walk?The New Highway Code Updates – a Summary for walkers →