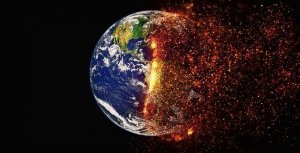 As I type it is May 7th and yesterday we experienced some very bizarre weather on our little hike from Lamport, Northamptonshire. We started our hike in glorious sunshine (shorts and t-shirt weather) but twice on the hike we endured a hailstorm. I've known snow and hail to happen as late as April in the UK, but I don't believe i've ever seen hail in May.

As we walked the conversation of the group naturally changed to global warming and climate change. When I returned home I wanted to find out a bit more as part of my “natural education slot”. Here are my findings. There’s no doubt humans have been the main part of the problem.

The vast majority of vehicles on the road (and in the air and water) are powered via fossil fuels, such as gasoline. As they burn this fuel to power their engines, these vehicles release carbon and other pollutants, affecting both air and water quality.

How can we help?

Millions of acres of forest are cleared every year, whether to harvest wood for making lumber or paper, to clear land for farming and ranching or to make way for residential and industrial areas.

Forests store enormous amounts of carbon, essentially removing it from the air and preventing it from being absorbed into the atmosphere, and this is especially true of rainforests, which are even more endangered than other areas. In addition to losing the natural air-scrubbing function of trees, deforestation decreases biodiversity, which can cause ripple effects throughout entire ecosystems, putting whole species at risk.

This one saddens my heart.

The industrialization of agriculture takes the potential negative effects of livestock production and amplifies them. While organic farming can have a positive impact on global warming by reducing carbon through the growth of crops, large-scale, industrialized farming negates the positive impact of organic food and animal production.

Additionally, the use of antibiotics in animal production is increasing, which contributes to antibiotic resistance in humans that is expected to become deadlier and deadlier. (Scary thought!).

Our need to have the latest gadget and get it delivered right now, in addition to a culture where disposability is seen as a positive, is a major contributor to global warming. This bent toward consumerism has ripple effects around the world.

Hundreds of millions of jobs around the world center on fishing, and about 3 billion people depend on fish as their main source of protein from food. But just as with most industries, humans have created too much of a good thing, and overfishing is putting the oceans at risk.

Human population growth and resulting overfishing are depleting natural marine stocks, which impacts the health and biodiversity of the entire ocean.

Though some forms of aerosols have been banned in many countries, other forms of them still are in wide use. These products are loaded with greenhouse gases, including CO2 and methane, as well as chlorofluorocarbons, which erode the ozone layer.

Production of aerosols has actually increased throughout the world, with most aerosols being produced in Europe.

I spent many hours and went down rabbit hole after rabbit hole on this particular topic. The list of causes for climate change is endless and the above is just a few things that grabbed my attention. The bottom line is that climate change issues come down to human behaviour. The good news is that we have the ability to change our behaviour and save our gorgeous planet. My readings have certainly made me think about my own behaviour. Every little helps!

Thank you to this article for helping with the info. ReuseThisBag.