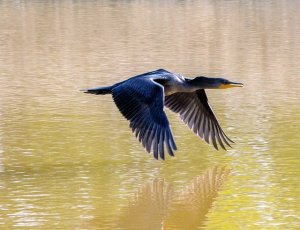 As spring finally kicks in and the days get warmer and brighter, we are out walking more. During this pleasant time of year a walk along the riverside is a delight, not only for it’s tranquil beauty but the opportunity to see some of Britain's less well known wildlife.

Often mistaken from afar as otters but known throughout the world for their superior fishing skills, the Great Cormorant is a staple part of British water life. This striking bird comes in a variety of sizes but its big flat feet, long neck and almost reptilian facial features make it a distinctive species.

Typically a coastal bird, the numbers of inland Cormorant colonies has dramatically increased in recent years. As your chances of meeting one of these magnificent birds are high, here are a few fun facts about the Great Cormorant.

Thank you to Rebecca Shields for supplying this fascinating article for Adventure Geek. We will be hearing more from Rebecca in the near future.