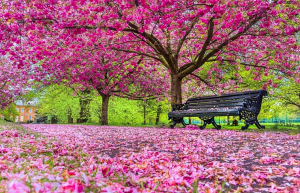 Cherry Trees are my 2nd most favourite tree, after the Oak Tree. So, on my quest to learn something new each week about nature, I thought I would delve into this wonderful species and find out some interesting facts.

The first fact, which is probably not relevant to many people, is that the estate where I live, everyone has a cherry tree in their garden. Also, i'm trying not to bore you, but my mum had a cherry tree that produced ripe cherries each year when we were growing up (fond memories, and lots o hamsters, rabbits and one dog is buried under that tree!). Anyway, let's get on with the blog!

1. Not all cherry trees bear fruit.

In fact, many ornamental varieties of the cherry tree have been bred to produce more flowers and, in some cases, don’t produce fruit at all. Most of the flowering cherry trees we see in UK parks and streets are valued for their flowers, with the cherries they produce small and bitter – not great for people but a good snack for the birds.

2. You can eat the blossom

That’s right, the cherry blossoms (and leaves) of varieties we find in the UK are edible. In Japan they’re pickled and used as ingredients for sweets, baking and tea. Come springtime you’ll also find sakura-flavoured chocolate bars. Don’t eat cherry pips though, they’re toxic and can be dangerous in large amounts.

There are flowering cherry trees in countries across the globe, including America, Korea, Brazil and India, with many originating through links with Japan. The UK’s cherry tree population is set to rise as another 6,500 new trees are being planted across the UK as part of the Japan-UK Season of Culture 2019-20, gifts from Japan to celebrate the relationship between the two countries.

4. Not all Cherry Blossom is Pink

While pink is the colour most people associate with cherry blossom, it tends to change from dark pink, to light pink, to white when fully in bloom. Some varieties even begin as a greenish yellow colour before changing to white and then to pink.

Cherry trees generally tend to bloom for only a week or two each spring. This could be even shorter if seasonal wind or rain knocks the blossoms from the trees. It’s one of the things that makes the cherry blossom so special – catch it while you can because it won’t be around for long.

6. Cherry Trees only live up to 30 years

Across all varieties, cherry trees tend to have a short lifespan, typically around 15-30 years. However black cherry trees can live for anything up to 250 years. The oldest known cherry tree is the famous Jindai Zakura in Japan – still flowering every spring an estimated 2,000 years since it was planted.

7. An Englishman Saved One of Japans Cherry Trees

Collingwood “Cherry” Ingram was an expert gardener with a passion for flowering cherry trees. While on a trip to Japan in 1926 he was shown a painting of a beautiful cherry tree with white blossom, believed to have died out in Japan. Ingram recalled having taken cuttings from a tree of the same species in a garden in Sussex and managed to reintroduce the Great White Cherry, or Taihaku, to Japan. Five Great White Cherry trees will be planted in The Regent's Park for the Japan-UK Season of Culture 2019-20.

8. Japan is NOT the Cherry Blossom Capital of the World

In fact, it is a town called Macon in the state of Georgia, America. In 1952 a local resident discovered one Yoshino cherry tree and loved it so much that he learned to propogate the trees and gifted them to his community. Macon now has over 350,000 Yoshino cherry trees flowering at their annual blossom festival.

9. They Symbolise More Than Just The Start of Spring.

In Japan, many schools and businesses have a cherry tree in front of their building. The financial year and the school year both start in April, with the blooming trees a symbol of renewal and a fresh start. In public parks, people gather under the branches, eating and drinking, appreciating the fleeting beauty of life with friends and family. The short-lived hanami celebrations are a reminder to seize the day.

Shout out to The Royal Parks for this article for assisting with these facts.

Posted in Random Thoughts
← INTERESTING FACTS ABOUT HEDGEHOGSIs it an Otter? An Eel? Or a flying fish? No! It’s a Cormorant! →