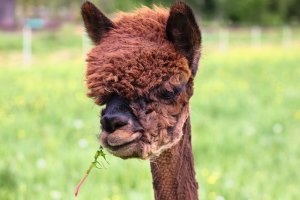 On my morning walk through a tiny village called Hulcote, I always say good morning to three alpacas. Well, I assumed they were alpacas, but I wasn't really sure. So as I continue on my journey of discovery, here is what I have learned this week.

Having completed a few llama trekking hikes in the UK (my daughter went through a “llama” stage), I knew that Llamas and Alpacas were part of the camel family. But here are some other discoveries.

#1. Alpacas are much smaller than llamas

A llama can weigh up to 400 lbs, whereas an alpaca will only weigh between 100 – 150 lbs when fully grown. At the shoulder, an average alpaca stands between 34 and 36 inches, while a llama generally ranges between 42 and 46 inches.

#2. They have different ears and fleeces

Alpaca ears have short spear-shaped ears while llamas have much longer, banana-shaped ears. … The alpaca also produces more fleece than its larger cousin and in a much greater variety of colours. Llamas also generally do not have as much hair on their head and face as alpacas do. The alpaca produces a much finer fiber than the llama.

#3. Their faces are very different

Llamas have a longer face; an alpaca’s face is a bit more blunt, giving them a “smooshed in” look. A llama has much less fur on it's face and is not so cute looking.

#4 – They are bred for different reasons

Alpacas are very much herd animals, while llamas are more independent-minded. Alpacas also tend to be a bit more skittish than llamas, which are often used as guard animals for alpacas, sheep, and other small livestock.

A quick infographic (thanks to Lizzi Bucklow Holt for sharing this with me).

Posted in Random Thoughts
← THE UK EQUIVALENT TO THE GOSSAMER GEAR THINLIGHT 1/8” PAD – WHAT’S IN THE BOX?INTERESTING FACTS ABOUT HEDGEHOGS →