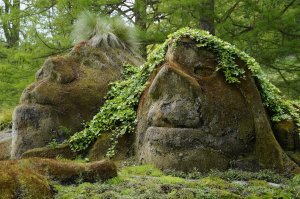 As I continue on my weekly “nature” education goal I was struggling to think of a topic week. I went for a walk and then sat down on an old tree stump to take a break. As my hands gently caressed the moss that was growing beside me, I realised that this moss was different in looks to the moss on the wall by the river. Um…. my next education slot will be about moss!

Fact #1. Moss was the very first plant on earth!

The moss plant is old! They date back 450 million years and have survived and thrived through a range of drastic climate changes. If you have ever walked through an ancient forest then you will appreciate how old these plants are.

Comprised of 15,000 – 25,000 species, they occur on every continent and in every ecosystem habitable by plants that use sunlight for energy.

Among the world of plants, the bryophytes are the second most diverse group exceeded only by the angiosperms, the flowering plants (350,000 species).

You may think that this is not possible, but yes, moss does not have roots. Mosses grow in many different environments, from cold snowy mountains to baking hot deserts and because of their range of adaptations, they are able to occupy areas that are otherwise uninhabitable such as rocky ledges on mountainsides.

Different species have adapted to survive in extreme conditions. Studies have shown that the lowest temperature they can photosynthesise (turn energy from sunlight into food) is around -15ºC and the highest is around 40ºC.  That is super diverse for a plant and you can now see why it can grow anywhere!

In hot environments like a desert, one way that mosses tolerate heat is by becoming dormant. When they're desiccated (dried out) they can survive heat much better than when they're hydrated.  So I suppose a moss plant is able to hibernate.

Some mosses have even been known to survive temperature highs of 100ºC when dried out, and lows of -272ºC. That's a resilient little plant right there.

Fact #3. Moss plants do not have roots

Unlike most other plants, mosses don’t have roots.  Instead, they have rhizoids, which are small hairlike structures. Their main function is anchoring the plant to rock, bark or soil.  So without roots, some moss suck nutrients up through the rhizoids and others draw in moisture and minerals from rain and the water around them through their highly absorbent surfaces. Clever little plants!

Fact #4 – The Moss Plant can Impact The Temperature Around them!

Mosses can impact the temperature of the soil, both warming it up and cooling it down depending on the environment.

In hot places, they can protect tree roots by shading and insulating the soil from high temperatures.

In the Arctic they have an opposite effect on temperature. They can prevent the warmth of the sun from reaching the ground and reduce the speed at which ice thaws, keeping it cooler for longer.

Most animals don’t eat moss. It’s hard to digest, and it has little nutritional value. So why are reindeer different? The moss contains a special chemical that helps reindeer keep their blood warm. It keeps them warm during their yearly journey across the Arctic region, much like antifreeze keeps a car from freezing up in winter.

Fact #6 – There is a new graffiti in town that's rather cool!

Known as guerrilla gardening or eco-graffiti, moss is being used by some as a more eco-savvy alternative to permanent ink. The next evolution of street art?

During the first World War, mosses were used as bandages. Moss has antiseptic properties, which was perfect to cleanse and heal the wounded over the course of the war. Earlier, mosses have even been used as diapers.