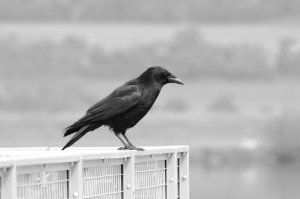 I met up with a friend last weekend to map a new walk near Daventry.  As we crossed a field we could hear a whole flock of crows in the distance.  I looked at Annette, are those rooks or crows?  She went on to explain the differences which I thought would make a great education slot for this week’s learnings about the natural world.  (Thanks Annette).

Unlike rooks or ravens, the crows are more likely to be found in your garden or on their own.  So that big flock of crows that we saw all flying together was actually a flock of rooks, not crows.

Rooks are a very sociable species so you’re unlikely to see a rook on its own. Rooks build their nests right at the tops of trees, in noisy groups known as rookeries. You are unlikely to miss them!

#3 – They have different thighs!

The Carrion Crow has neatly feathered thighs unlike the shaggy thighs of the Rook. (Check out the photo and you will see what I mean).

The Crow also has feathers around the base of the beak. While at first appearance its plumage is black, on closer inspection, it has a green and purple lustrous or brilliant appearance.

#5 – The beaks are probably the main difference

Rooks are easy to identify thanks to the bare, greyish-white skin around the base of its beak – nostrils and chin. Just to confuse things, a juvenile  rook doesn’t have the bare beak, that develops in adulthood.

The crows' call is a hoarse, cawing sound. However, Rooks are rarely alone and so their raucous caws can become overwhelming.

#7 – Their nesting habits are different

Rooks' nest in close-knit colonies but Carrion Crows do not, although their nests do look very similar.

It was not a flock of crows that we saw on that walk, it was most defiantly rooks! Their nests were all in one tree and the noise was loud!  I always thought it was crows that flocked together so I learned lots of new things this week.  Thanks Annette!

Posted in Blog, Random Thoughts
← How to Sleep Warm When Wild Camping in the UKFIVE WILD CAMPING TIPS →