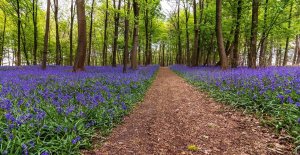 As I continue along my journey of learning something new about nature each week, I thought I would share with you my latest blog about endangered/protected flowers.  Please let me know if you are enjoying this series of “education slots”.

Spotting snowdrops and daffodils on my morning walk I started to wonder if these are protected flowers.  I knew that Bluebells were protected, and some wildflowers, but I have no idea what flowers / plants are “officially” protected in the eyes of the law.  Google…. help please!

However, you should not pick any plant on a site designated for its conservation interest, such as National Nature Reserves (NNRs) and Sites of Special Scientific Interest (SSSI’s).  It is illegal to pick, uproot or remove plants if by-laws are in operation which forbid these activities, for example on Nature Reserves, Ministry of Defence property or National Trust land.

The rarest wildflowers are particularly at risk, due to their habitats disappearing. However, important common flowers are also under threat.

From flowers protected in a secret location, to those who ‘trick’ bees, we look at six wildflowers that are endangered in the UK.

Do you know these endangered UK flowers?

I am now obsessed with looking in more detail when walking through meadows and fields full of wildflowers to see if I can spot any of these endangered species.  Have you seen any of these on your travels?

This is considered to be the most endanger woodland plant in the UK.  This is partly because it has such specific growing conditions. It relies on nutrients from rotting vegetation and it can wait nearly 30 years before flowering!  They thought this plant was completely extinct until someone found one growing in a secret (and now protected) location in 2009. This is the creepiest flower i’ve ever seen and I understand why it has a spooky name!

I knew that bluebells were protected, but didn’t realise that they were an endanger species of common flower in the UK.  If you are found picking wild bluebells then you could be fined up to £5000!  Also, don’t tread on them! Bluebells are very easily trampled and if their leaves are crushed, it can stop photosynthesis.

Meadow clary is another flower that is protected by the WCA, meaning it’s illegal to pick, uproot or damage it in the wild. It’s been left vulnerable due to habitat change, often caused by the ploughing and fertilising of grasslands, as well as the continual loss of grazing by livestock.  You can usually find this flower sprouting up in chalky climates, limestone soils or open grasslands in the UK.

I’d never heard of this one, but looking at the photos I see where it gets its name! It has a very sad story as to why it is becoming extinct. each spring, the early spider orchid – a flower that looks more like a bumblebee than a spider – releases a pheromone which attracts male solitary bees. Male bees mistake the flower for a female and this process is key for the plant’s pollination. This happens because the orchid blooms for a short time each spring – just after male bees emerge from hibernation, but before females, bees appear.  Spring is coming earlier than it did 50 years ago therefore the window between the orchid blooming and female bees emerging has shortened by as many as six days. This can give the orchid less time to reproduce, so its population may continue to decrease as the seasons shift.

The twinflower can be found in the Caledonian forests of Scotland, as well as some heathlands. However, their numbers have decreased in woodland areas. Changes to Scotland’s landscape and a decrease in Caledonian pine numbers has resulted in many of the plants being too far apart from each other for insects to pollinate.

These flowers fascinate me.  Apparently, the scales (petals) light up like stand glass when the sun shines through them.  The snakes head is the county flower of Oxfordshire.  It grows in wet meadows, especially hay meadows, which flood in winter months.  Climate change and the way we cultivate the meadows to prevent flooding is a huge threat to these flowers.

This week I learned lots of new types of flowers. Some of these stories are quite sad, but it is lovely to hear that places such as the Wildlife Trust and other “bodies” are doing their best to preserve these engaged species.

Posted in Blog, Random Thoughts
← WHAT ARE THE FIRST SIGNS OF SPRING?How to Sleep Warm When Wild Camping in the UK →