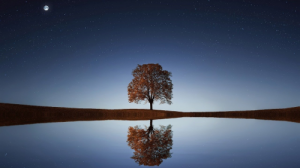 One of my goals for 2021 was to learn something new about our natural world each week. I started posting my learnings on Facebook, but then realised that the posts were quite lengthy and made for a great blog post. So join me on my weekly journey of discovery. This week I have been learning all about trees!

What attracted me to find out more about trees?

On my daily morning walk I go by a tree that I have nicknamed “Fred”. Fred is my “thinking” tree. His roots are thick and wide and make for a perfect seat. Sitting there, watching the sun go down I have solved many problems and challenges. I also tap his bark and say “morning Fred” if I am just walking by and I often have little brainwaves of creative ideas while doing this. I was curious to find out more about trees and why so many people are drawn to them (including me). One of my favourite books as a child was The Magic Faraway Tree by Enid Blyton, I think my love of trees started back in those early childhood days.

So without further ado, let me share with you my findings about trees:-

I expected trees and plants to be part of the natural world since life began, but after dabbling in some research apparently, that is not a fact. Trees have only been around for the last 10% of the earth’s entire history. The earth may be a staggering 4.5 billion years old – but even early forms of plants (such as mosses and lichens) only sprang up as recently as 470 million years ago.

I was fascinated by this and it lead me down a rabbit hole of Google “how old is the oldest tree?). Results claim that the oldest tree is actually Methuselah, an ancient bristlecone pine tree. It was the oldest known non-clonal organism on Earth. While Methuselah still stands as of 2016 at the ripe old age of 4,848 years old in the White Mountains of California, in Inyo National Forest,

Of all the surprising facts about trees, it's perhaps their staggering height that inspires the most awe and wonder. The towering great-granddaddy of them all is a redwood species called Hyperion – which is a massive 116 metres high. That’s 20 metres taller than Big Ben!

Fact #4. Trees actually communicate with each other!

Learning that trees can actually communicate with each other opened my eyes to a whole new world. I feel very different now when I walk through the woods or a forest. I actually have conversations with the trees! (Did I actually write that down? well, it's true!).
Apparently, trees help each other to ward off predators by communicating with each other. Trees look out for each other in ways that could warm the cockles of even the hardest of hearts! For instance, some tree species can release airborne chemical signals to each other to warn them about incoming threats like insects. Their closest neighbours then produce tannins, which make their leaves taste bitter to approaching predators. How cool is that?

Fact #5. Trees have their own special ‘internet’

Staying on the “communication theme” , trees can actually ‘talk' to each other, and they even share nutrients. They manage to do this through an incredible underground system created by soil fungi.

Fact #6. Trees have a ‘nationality’

Fascinatingly, more than half of all tree species exist only in a single country – almost 58%, to be precise. In fact, a recent study found that many naturally occur only within the borders of a single nation – with Brazil, Colombia and Indonesia having the highest totals for native tree species. There are currently around 60,000 species of trees in the world – and of those, about 300 are critically endangered, with fewer than 50 individuals left in the wild.

Britain is home to around a hundred common tree species, with some of the most popular thriving in urban areas. London alone contains over eight million trees, thereby earning its classification as an urban forest. Our most common trees in the UK are Plane Tree, Sycamore Tree, English Oak, Silver Birch and the Horse Chestnut Tree.

Leaves aren’t just green – even if they appear that way for most of the year. In fact, leaves are naturally red, yellow, orange, purple and green. It’s just that a chemical called chlorophyll (which makes leaves green) tends to dominate until leaves get less sunshine. When that happens, chlorophyll isn't produced as much, making the green colour fade, and allowing the other colours to be revealed. That process is helped by lots of dry weather and sunlight, which help make more sugars in the leaves, to turn them a brighter red. If you’re someone who looks forward to Autumn foliage every year, it’s another reason to do your bit to help stop climate change. Scientists believe that global warming could potentially make Autumn foliage a thing of the past. That’s because if temperatures remain too warm, it can stop a tree’s leaves from revealing the full beauty of their natural colours.

Fact #8. Trees release chemicals that can make us happier.

This one put a smile on my face! Once I learned the benefits of walking through a forest then I realised why I naturally feel attracted to the woods. Forest bathing is now on my list to learn more about this ancient art.

It’s been proven that just looking at trees can make us feel happier, less stressed and more creative. That’s partly because they release chemicals called phytoncides. Research has shown that when we breathe them in, it can have amazing effects, reducing blood pressure, lowering anxiety levels and increasing pain threshold – and they can even boost our levels of anti-cancer proteins!

Originating in Japan, forest bathing (also called Shinrin-yoku) is becoming hugely popular. This is a practice that involves doing mindful walks in forests, to soak up the relaxing vibes. It’s thought that doing something as simple as immersing yourself in the calming atmosphere of a forest can have major benefits for mental wellbeing.

Fact #9. Trees have been worshipped for centuries

I never really thought about the phrase “knock on wood for good luck” – now I now where it came from!

There’s a whole lot of folklore and myth surrounding trees – and all kinds of ancient pagan cultures, including the Celts, believed that kindly spirits lived in trees. Knocking on tree trunks was thought to awaken the spirit for protection – and this led to the saying ‘knock on wood’, which we still use today!

Trees are disappearing from our planet at an alarming rate. Sadly, about 15 billion trees are lost each year due to deforestation and changes in land use. Farming, grazing of livestock, mining, and drilling account for more than half of all deforestation – with unsustainable forestry practices, wildfires and urbanisation making up the rest.

I will certainly spend more time walking in the woods and forests. I will look at trees in a completely different light from this moment forward. I hope you found this blog as fascinating as I did when researching. I'm off to hug a tree!

Credit and source of many of these facts are from https://www.ovoenergy.com/ – a fantastic site and worth checking out.