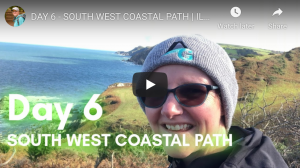 FROM: Hele, nr Ilfracombe to Woolacombe

The one with the personal local guide,

DISTANCE:- Our last day and a fairly moderate 11.7 miles over lovely terrain.

HEALTH:- Compression socks on today as yesterday I could feel the start of shin splints!

WEATHER: Absolutely wonderful! The sun shone through for most of the day which glistened on the sea. It was stunning!

A slow start as we took our time in Ilfracombe looking at the statues, going to the public loo etc. There was no rush today and half of me didn’t want this to end, but the other half of me was craving my own bed. We were joined by a lovely old boy called Paul, and it was also nice to share the trail with three SWCP hikers from Taunton.

💴 8 am – The car shuttling begins. We drove to Woolacombe and arrive at a car park overlooking the beautiful beach. We will be walking down that cliff later today! The little man in the parking hut comes out with a mask and gloves on. Lou puts the window down to give him some money for the parking and he said: “you do know it’s free if you park on the seafront?”. “Well, we are here now”, said Lou and went to hand him a £10 note. He didn’t take the money but went back into his little hut and came out with one of those grabbing sticks that old people use to pull their socks up. He presented the stick to Lou, and with an amused look on her face, she placed the £10 note between the clamp. He took the £10 and put a £5 back in the clamp and then passed it back to Lou. It was all very humorous and took forever!

🏊‍♀️ 9 am – We park at Hele, just outside Ilfracombe and watched two women wander down to the sea in their swimming costumes! It must be freezing in that sea! Mad people!

As usual, the trail goes up onto the cliffs. Of course, it does! My legs are like rocks now and I fly up the steps.

The town of Ilfracombe is in the distance and we can spot our hotel from last night.  As we walked around the harbour, taking photos of crab baskets and unusual signage, we befriended a lovely old boy called Paul. He explained the history of the massive statue on the harbour of a pregnant lady with a sword called Verity. It represented justice.  Paul was super informative and he was enjoying the attention of his little guided tour.  “Can I walk with you for a little while?” He asked. “Of course” we replied. “Just tell me to bigger off if you want to be on your own”. We laughed and his company and local knowledge were welcomed by all of us.

“See that rock?”, the locals call that the Preacher rock. It’s where the priest would stand and preach to the people below.

Paul Blackmore was 74 years old and has lived here most of his life. He loved the trail and knew every curve and bend by heart.  He explained that one section was a toll trail with a cafe on the top (which is now just a viewpoint).  He was a very fit 74 years old and he beat us up those hills!

As the five of us climbed out of Ilfracombe we were joined by three guys who were doing the SWCP in section/day hikes. They lived in Taunton and today they were walking from Coombe Martin to Woolacombe. They were gobsmacked that we were hiking with all our gear and camping along the way. Hugh fives all around!

12:00pm. Just over three miles in and we reach the dinky village of Lee. This is where we say goodbye to our new friend Paul. He gives us final instructions on where to go and wishes us well as he turns around and heads back to Ilfracombe.

1 pm – We found the perfect lunch with a view to die for, although this is a very popular area for dog walkers and it’s like the M1 as we sit and fire up our Jetboils for lunch!

1.30 pm – I’m not sure where we are now but we stumble upon this very modern looking lighthouse. It has a big siren thing on the front. There is a red car parked on the edge of the cliff which looked a bit dodgy. A guy was just sitting in there looking out to sea. There was no road so we have no idea how he got up there. As we clamber down the path we got chatting to a lady who had two slinger spaniels. “Is that your car?” She enquired in an accusing manner. We shook our heads. “She went on to say how annoyed she was that someone has the audacity-to park there and spoil everyone's view. When Rebecca mentioned that there was a guy sitting in the car she was on a mission to speak to him. Her friend said, “Sue will sort him out!”. And off they went.  We watched the story unfold as Sue and her friend made their way to the car, knocked on the window and we could see arms flying around and lots of points. I wouldn’t like to be that bloke right now!

1.55 pm – The hills were much easier today than previous days. It was more like the 7 sisters at Eastbourne on the South Downs. Rolling hills, a gentle breeze and very peaceful. Rebecca kept vanishing to take photos of the hidden coves. She beckoned us over at one point as she pointed out the steps that lead to nowhere!  A wooded staircase which was part of the cliff edge had fallen away.

☀️ 2.50 pm – As we approached our final destination we sat on a bench to take it all in. The sea was glistening in the sunshine. Surfers were in abundance I. The water and there were seals playing to our right.  The final descent was easy and we finished our trip in true Devin style with a cream tea on the seafront! A perfect end to a fantastic section hike.

Bye-bye for now, SWCP. We will return soon for the next episode.