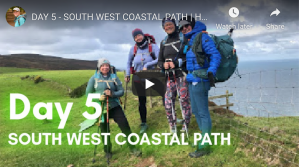 FROM: Hunters Inn to Ilfracombe

The one with the snake, two forks and the bull!

HEALTH:- We are all still fairly healthy. No blisters on any feet, although we now all have calf muscles of steel and Tiger Balm has come in very handy!

WEATHER:-  Today the wind has been relentless which can be scary on those cliff edges!

CAMPSITE:  We got back to Ilfracombe late, our tents were still wet from the previous night so we are staying at the Imperial Hotel on the Seafront in Ilfracombe. It’s a classic hotel full of people of a certain age who are here on a coach trip.

We set off walking by 9 am and the first section was a lovely forest stroll along the river. Then it went up and didn’t stop! The walk today was mainly on the headlands and cliff edges in very windy weather. All the horrible things seemed to happen to me today! The collie dog who barked and nearly pushed me over the edge, to nearly stepping on a python 🐍 (probably an Adder) who was basking in the sun! We finally arrived, 12 miles later in Ilfracombe where we are staying tonight.

🚗 9.15 am – Car shuttling done with a cheeky hot coffee from the garage on the route and we are off! The National Trust section from The Hunters Inn near Trentishoe was our starting point today. I made a mental note to return and sample a cream tea here as it looks divine!  As I hauled Wanda onto my back a local guy asked us “where are you guys off too?, you are not going up onto the SWCP are you?” We all nodded and explained that our destination for today was Ilfracombe. He shook his head “it’s very windy up there today, be careful” and with that he continued on his way, still shaking his head in dismay. Were we mad? Was this trail that dangerous? I’d read The Salt Path and it never sounded that bad!

🐕 9.31 am – The river walk was lovely but it wasn’t long before the trail took a turn upwards. We bumped into a little old man wearing a flat cap and his very old black Labrador. How on earth the old dog managed this hill I have no idea. People are so friendly in this area and the chat was a welcome break for my burning thigh muscles.

💨 10.26 – We see a sign for Combe Martin(8 miles) although I never believe these signs! The trail weaves its way up and up onto the cliff edge. It’s absolutely beautiful but I didn’t stop to take many photos as all my concentration was spent trying to keep upright in the wind and not taking a nose dive to my right! Eventually, we reach inland and we have a fence to our left. I feel safe now. I stop for a quick snack and put my down jacket on. That’s better! As I continue along the trail in my own little world two border collie dogs appeared from nowhere and jumped up at the fence barking and snarling at me which scared me half to death. My heart was racing but I kept my head down and just put one foot in front of the other. This wind was making the trail hard work today. My walking poles kept flying all over the place but I was reluctant to stow them away. They were incredibly handy on the ups and downs. How people walk this without poles I’ll never know!

☕️ 11.39 – We are now up high and the terrain has turned into a wide moorland trail. Jackets are off and the sun is out. We take five mins and sit down to make a quick brew and fuel the body with snacks. I had a text chat with Matt. His support has been great and his cheeky messages about the house being nice and tidy for nearly a week made me chuckle! “We know who the messy one is Julia” he text!!

☀️ 11.40 – After walking along a path that was more like a rocky river and dodging the boggy parts, we were now cruising along and putting a dent in today’s mileage. The path changes to a wide-open trail and we can actually walk two or three abreast rather than a single file. The sun is shining and lights up the moorland in front of us. It’s stunning.

🐍 12.05 – We are not the only ones enjoying the sun! I was at the front of our little gang of merry hikers. I suddenly stopped in my tracks and screamed my head off! I felt the colour drain from my face and my heart rate quicken as this massive 20ft python. (Slight exaggeration) was looking right at me and doing the coiling thing! If you know me then you will know that I have a deep fear of snakes which goes back to my childhood. I’ve walked in many hot countries and never seen one. It was the last thing I was expecting on a cold and windy October! 🐍 I turned around (still screaming like a little girl) and the others wondered what on earth was going on! They saw the snake as it quickly slithered away into the ferns and bushes.  With coloured drained from my face, Lou took charge and kept me talking whilst feeding me chocolate! Thanks, Lou! The next mile though those moorlands were horrendous! Every twig and branch were snakes in my eyes. Have I mentioned how much I hate snakes?

🦌 12.24 – I missed it on video but we spotted a large herd of deer running up a field in the distance. It was just lovely to see. Shortly afterwards we hear a few quad bikes and a large pack of hounds out on some sort of hunt. The hunt kickstarted quite a deep conversation about the rights and wrongs of fox hunting in this country.

📷 1.15 pm – We reached what felt like the top of the world. A summit with 360 panoramic views. Wow! We are now starting to see many day hikers and one kind gentleman took our picture.

🐄 2 pm – I’m getting hungry now and the view of Coombe Martin was in sight. We start making our descent and came across a huge, but very pretty white bull. I was busy taking a photo of the bull as it had an unusual curly top half and smooth skin on the bottom half when it suddenly stood up and took a step towards me… ok! Let’s move on shall we? Coombe Marin is calling!

🍴 2.30 pm – Coombe Martin is a very long village. We stopped at the first pub we saw called the Focsle Inn. It didn’t look that appealing from the outside but inside it was lovely. They were very Covid alert and we were shown to our table by a mask-wearing friendly guy. Beers all round, followed by lasagna for R&L and ham egg & chips for me & Debs. Yum! The food was excellent as was the humour of the business owner. Rebecca broke her fork (we had to eat with wooden cutlery) and the waiter guy returned with two extra forks for her (just in case!)

3.30 pm – Feeling refreshed and ready to go, we hauled our packs on, grabbed our poles and made our way out into the cold wind. Packs off, jackets on, packs on… now we are making our way out of Coombe Martin!

😃 The next few hours were again quite challenging. The hills feel steeper as we made our way through the official “Happiest View in the UK” (Broadland Beach). We took photos of a castle 🏰 which was now a posh hotel and wandered through a marina.

5.10 pm We passed the welcome to Ilfracombe sign and then celebrated with a cup of tea in the pub! It was in the pub that we made the decision to stay at the hotel tonight.