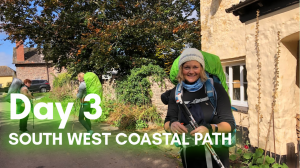 FROM: Porlock Weir to Lynmouth

The one with the 10 million river crossings, a damaged ankle and some tree-hugging!

HEALTH:- woke up with sore quads, aching calve muscles and dodgy ankle but a couple of pain killers and I was starting to feel better.

WEATHER:-  we’ve been so lucky with the weather! A few drizzles but mainly dry and warm.

CAMPSITE:  staying at Sunny Lyn Holiday Park and we are the only tents here! Pitched right next to the river. And a lovely lady in a nearby caravan made us all hot chocolate while we pitched our tent!

After a full English breakfast in our hotel, we set off to Porlock Weir to begin today’s hike. We left our tents and camping stuff in the car so our packs were more manageable today. The trail was mainly forest walking and lots of river crossings (we all had a slip in a river /waterfall at some point today! I also fell over on a gravel track which made my right ankle a bit sore. The steepness and drops were a little too steep and we gingerly passed landslides. It was a tad scary, to say the least, and I’m not afraid of heights! 13.5 miles later we were in Lynmouth eating a hot scone with cream and jam. Life is good!

9.15 – Rain kilt on (yes I look ridiculous) and waterproof jackets and we are off! We weave our way up and up… with Debby saying “not another bloody hill!” Within 10 minutes we pass a landslide sign and we are diverted onto a switchback. Little did we know that we would pass many of these today.

9.24 am – The path leads us up to the gorgeous thatched arched building with humorous signs.  It’s called Worthy Combe Toll. You had to pay to pass but it was in the middle of nowhere!

🔔 10.24 – An hour later we come across our first waterfall of the day. We all took photos and oohhh… and ahhhhed! It was right next to Culbone Church ⛪️. To my surprise and delight, this 14th-century church was open for visitors, complete with hand sanitiser! It’s was dinky inside and so cute! The bell was the oldest church bell in Somerset.

💧 11.27 am – This looks complicated as we stand at another waterfall and scratch our heads! How on earth are we going to cross that? The water was gushing so fast that it had created a river over the path. There were stepping stones placed at awkward angles. “I’ll go!” Volunteered Lou (the brave one!”.  She tentatively took little steps and balancing herself with two poles. To our right was a steep cliff edge. Of this went wrong it would be disastrous! I realised I was holding my breath as Lou made her way across the river, then with about three foot to go a stone wobbled and she was in the water! She was quick though and her poles became extra legs as she gracefully danced her way to the shore! “Your turn!” She shouted to Debby with a smile! We all crossed safely and that was the first of many river crossings today.  Yes, we must have crossed at least 20!

🌰 This forest trail feels like something out of Lord of the Rings. It’s deep rich colours and moss ridden stones and trees. An enchanted forest with a treat every now and then on our right as we captured the sight of the sea. I loved it! The birds were singing, it’s not rained for hours and the smell of wet leaves and crunchy chestnuts on the ground was just wonderful. I’d been transported to another world.

🍕 1.30 pm – We stopped for lunch by another waterfall. It was very picturesque which is more than I can say about my leftover goats cheese pizza! As I took a bite my face scrunched up and it was not good! As Rebecca cooked up hot chicken curry, and Lou had a soup in a mug I regretted not taking my time and cooking something instead. Why am I always in a rush? I made a phone call to the campsite in Lynmouth so we now had a place to stay tonight. I was getting cold sitting on that rock, so I got my pack on and told everyone that I’d make a head start and walk slowly. I knew they’d catch up. Denny joined me as she also had cold pizza!

🐗 🐷 2 pm – Debby and I were chatting away and as we turned the corner we were presented with two pillars and wild boars perched on the top. There was a small group of four people standing the other side of the pillars so I asked inquisitively “do you know what the pigs are for?”. One man responded excitedly “yes!, they represent a family emblem, it’s the crest of a local family” he explained. My instinctive reaction was not good “A pig is a weird crest, don’t you think?” The woman next to him responded with “It’s a wild boar, not a pig, and it’s his family” (pointing to the man). I looked at Debby and she raised her eyebrows at me! I could hear her thinking “don’t offend the locals Ju!”.  I started to apologise but it was too late.

🦁 2.14 pm – What on earth is that noise? It sounded like a cow was giving birth! Lou chirped up and said “it sounds more like a lion!”… then we all said in unison “it’s sea lions!!” The roar of the sea lion went on for a good half a mile or so. Wow!

✈️ 2.20 pm More river crossings and this time it was Debby to doing the river dance! All caught on video! We continued through the forest but there were still lots of climbs! Lou gave us a demonstration of the dam busters game which included singing the song while waving your sticks like an aeroplane and dropping a penny in a bucket from your butt cheeks! (You had to be there!)

3.30 pm – The last three miles were on open hills and sharp cliffs. We could see the Lynton and Lynmouth Valley Railway (that is carved into the cliff) in the distance.  I got my stride on and with the sweet tones of Lucy Spraggon in my AirPods I was on a mission for a well-deserved cream tea.  I soon left everyone behind and had a few hours of solitude. I was drinking a hot latte and warmed scone with jam and cream when the other three came trip trapping over the bridge in Lynmouth.

Today was the best day yet!