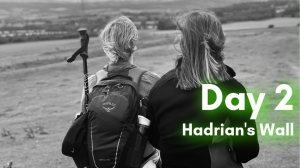 The one with the extreme wind!

LOCATION: Heddon on the Wall to Chollerford

TERRAIN: Quite a bit of road walking today, but we did see the first slice of the wall!

Total walked on the trail so far: 30.1 miles

Ok, so the 12 miles walking today was a slight underestimate! But hey, it means we are nearer than expected! The wind was crazy as us small people struggled to keep ourselves upright when climbing tall stiles! If you think I am exaggerating then check out the video.

7.30am – I slept really well, although I did get up at 3am to turn off the heating. I was in a bunkroom by myself so I spread my gear out over the other bed and made myself a cup of hot coffee first thing. I was up and about around 6am, so grabbed a nice hot shower and just took my time getting ready for the day ahead.

Breakfast was lovely as the lady (Paula) of the B&B was just like Ma, from Darling Buds of May., She cooked extra 🥚 eggs for Soup, and we all had little breakfast boxes. She took one look at Anthony and said: “you won’t get far on that little packet of cornflakes, have two”!

9.30am – ⏰ We left late today as it’s only 12 miles! A few people were running late, so Sue took a group to see a slice of Hadrian's Wall in Heddon on the Hill, while I waited patiently for the group that was car shuttling. Apparently, it was a bit difficult to find parking at Chollerford.

9.45am – And we are off! The main chitter chatter seems to be about our accommodation last night. Two people stayed in airbnb's in Heddon and the experience was not exactly the best. Jan felt a bit isolated as she never met her host, and the key was just left in an unusual place for access to the converted garage. Sue also had a few issues with her b&b which resulted in the host refunding her.

11am – 🤦‍♀️ 🧱 Robin Hood In was our first stop and we all got a stamp in our passports. It is very handy that the stamping stations are outside of the premises. This means that you can grab your stamp at any time of day or night. We stopped for a quick coffee and toilet break. I popped to the loo and found Jan laughing. She had been standing underneath the paper towel holder with wet hands wondering why the heater wouldn't turn on!

🏃‍♂️ We met two guys who were running Hadrians Wall in just two days! They started at Carlisle yesterday! They didn't stop for long, but long enough for us to tell them how mad they were.

🚗 We spent a lot of today walking next to the road. Apparently, the wall was underneath the road which was built in 1751.

🚘 An Audi R8 went zooming. Let’s just say us girls had a discussion about the size of a certain part of his body!

☕️ Coffee at Errington Arms Coffee Shop, which was a converted pub into a tea room. It was the perfect place for a lunch break. We had a mix of toasted tea-cakes, crisps and of course, hot coffee! Everyone was checking in today at certain places, and as we were about to leave the Errington Arms the backmarkers, Nick &Judith just arrived. It was a tight group today and there was probably only about an hour or so difference between the front group and the back group.

This is not 12 miles Julia!

Ok, so I started getting comments about there was no way today's walk was 12 miles. As I checked Guthook I realised that is was more like 15 miles, not 12. I have no idea where I calculated that from? Oops! From tomorrow I will double check the mileage before announcing it to the group (mental note taken!).

The next 6 miles were challenging!

We went over huge ladder styles, along escarpments and through sleepy villages battling against the wind. I was secretly abolishing myself wondering why on earth I had decided to walk east to west and into the wind for the whole trail?

It was now 4pm and we still had a few miles to go. Helen was cursing me for having to walk 15 miles and even the site of the wall didn't seem to raise our spirits. We walked another half a mile through the woods and forest and then a decision needed to be made. Many people were staying in “Wall”, and a few of us were staying in Chollerford. Wall people went left, Chollerford people went right.

5.15pm – We fell through the B&B's front door in Chollerford. It was a Sunday, and the evening meal was booked for 6pm. I launched Google maps which told me the pub was a half a mile from the B&B, which doesn't sound like much, but when you have already walked 17 miles, the last thing you want to do is walk to the pub! A very quick shower, and me, Helen and Herb set out for the pub. It was worth the walk as the roast Sunday dinner was absolutely gorgeous and I ate every mouthful.

7.30pm – I know it sounds bad, but I am already tucked up in bed and my eyes are heavy. I'm still loving it, even if it has been a tough day.

Let's do it all again tomorrow.