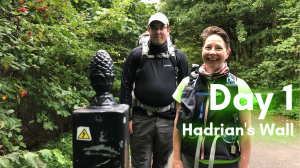 The one with the long river walk

LOCATION: Newcastle to Heddon on the Wall

TERRAIN: Flat for 14 miles then a steep 2-mile hike to our final destination.

Did I sleep well? No, not really. The Carlton Hotel was a bit of a bodge doge hotel and I soon understood why I had only paid £45 for a double room. Not only did I have problems getting in to my room as the key wouldn't work, but the toilet continued to fill even after 10 mins of flushing. In the end I stamped my foot on the floor out of frustration and the back panel fell open behind the sink and revealed the stop cock! Someone else had obviously had that problem as well. With the stop cock turned off I was finally able to get to sleep. I think the smell of “weed” that was drifting down the hallway also aided my sleep!

6.30am – I am keen to get going. I am nervous as today I will be starting the journey of leading 16 people across a whole country! I have never done anything like this before and certainly not with this many people. The additional problem of Covid19 restrictions just added additional complications.

Talking of COVID, let me explain the rules with regards to walking outside as a business at the point of setting foot on Hadrian's Wall. We are officially allowed to take a group of up to 30 people on walking holiday as long as we adhere to COVID guidelines. This means hand sanitising regularly, adhering to social distancing measures etc. I had already briefed the group, and we had agreed to start out together, but it was important that everyone walks at their own pace. We would not be walking as a group of 17, and that is exactly what happened. We ended up walking in small pockets of 3's & 4's which was very comfortable throughout the whole 6 days.

I was all packed up, my label was on my bag for the luggage transfer people, and it had been dropped at reception. I collected my “grab and go” breakfast from the hotel was not to bad.

I arranged a series of taxi's to collect us from the hotel and take us to Segendum Fort which is the official start (or endpoint) of Hadrian's Wall. On the way there the taxi driver tells how lucky we are as this weekend would have been the Great North Run and it’s usually all fully booked a year ahead!

One of our walkers left his phone in the taxi, but the drivers of Newcastle are super friendly and returned it just before we were about to leave!

I gave the briefing for the day, explaining the expected mileage, the weather forecast, where to get stamps in your passport and where best to get coffee/lunch. The most important aspect was where to check-in. If people were heading off on their own (which I had encouraged them to do, then I needed to know that they were safe and keep track of where everyone was). This system worked brilliantly. Those that walked fast were not frustrated by those that wanted to take their time and take lots of photos. Those that walked slower did not feel under pressure to keep up. It was a win-win. Also, from a completely selfish point of view, it meant that I could also walk at my own pace. I would walk with the faster people in the morning, and then slow down and enjoy the company of those who were not quite so fast.

I know people moan about the first day on Hadrians Wall as it’s rather monotonous, but I loved it! The fabulous architecture of the bridges and the old buildings, the castles and churches it was brilliant. There was something rather therapeutic about walking alongside the river.

12:15pm – A few of us stopped for a picnic just outside a leisure centre. I fired up the JetBoil for a sneaky pot noodle, took my shoes and socks off and aired my feet for 20 mins. “Ping” Stuart was checking in at a Statue monument. The “checking-in” was working a treat.

🦅 A heron appeared from under the River Tyne then flew off with a fish in its mouth. The river is so much wider than I expected. It’s just vast!

1pm – “Ping” – Stuart, Anthony, Selina and Phil were already checked in at the Swan Pub in Heddon on the Wall. They were enjoying a well-deserved pint and were waiting patiently for us all to arrive.

We turn away from the river and the incline is immediately steep! Two miles of uphill, but it was great to have a change of terrain. The weather was overcast by still very warm. Jackets were removed and the chatter between our small group of Michelle, Nigel, Jan, Helen and myself was suddenly rather quiet. The pub was calling and we would be there in the next half an hour or so.

I'm not drinking at the moment, so it was a Becks Blue, with a view to celebrating a successful first day. We “checked in” on WhatsApp so that the people behind us knew where we were. By 3.30pm we were clapping Judith and Nick as they came back to the pub. This little ritual of celebrating each day as we finished the walk was a nice touch and bonded the group so well.

Covid19 has made life extremely difficult for B&B's and Hotels. Especially places such as Houghton North Farm which offers bunkhouse accommodation. The only people staying at the farm were Adventure Geek members and we all had a complete bunk room to ourselves. I had a room with three beds, and so did everyone else! It was clean, and we could not have been cared for by Pauline any better. She had also allocated us all our own shower room and own toilet. We were asked to strip our own beds in the morning, which no-one minded at all.

6pm – Dinner at The Swan

We went back to the Swan Pub for an early dinner. The food was great and again, Covid regs were adhered to in a professional way. We sat in one group of six, and then another table nearby had four people. The food was excellent, the beer was even better and with full bellies we then wandered back to the farm where sleep was calling.