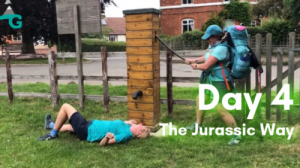 The one where we rescued highland cows, met the most trustworthy landlady ever, saw a snake and enjoyed a hot bath!

Weather: The morning was perfect walking weather but then the heavens opened and things got muddy!

Health: Surprisingly we are all feeling rather good. Tired feet and aching muscles but that’s about it.

Woke up in the pub garden and had a full English breakfast before the days walk! (much better than instant porridge). Within the first mile, we stumbled across four highland cows who looked manky and were desperate for a drink. Mission cow was launched and executed in grand style!

The rest of the day was full of so many weird and wonderful stories including a strange landlady, a snake, stripping and pumping, and then a friendly face appeared in the woods and became our guardian angel!

🏕 Woke up with my face squashed against the mesh wall of my tent. That’s what happens when you pitch on a slope!

5.15am – sitting in the pub garden writing ✍️ my journal. This is the best part of the day for me. It’s so peaceful and a great way to reset my brain in preparation for the day ahead. I’m joined by Rebecca about an hour later and she takes me through some yoga 🧘‍♀️ stretches.  I was amazed at how flexible Rebecca is!

🍳 8am – All three of us devoured a home-cooked full English breakfast including black pudding. We are all set for the day ahead.

9.25am – Within a mile, we climb some steps and Rebecca spots a big ginger hairy beast with massive horns! “Look at that!” She said. It was a bit off-trail but we nodded at each other and traipsed across the field for a better look. It was a good decision and the Highland cow was in a sorry state. Poking it’s head from behind the cow was a little baby highland cow, which also looked in dire straits. At closer inspection, we realised there were a further two cows in the field.  The mum cow came slowly to the fence and kept looking at the water trough then back at us. The trough was split into two sections. The section on the cow side was empty. The contraption that fed the trough wasn’t working. Between us, and numerous electric shocks from the fence, we managed to get water into the trough by lifting one end and swilling it so the cows could drink. It was a sorry sound to hear them slurping away as if their life depended on it. Rebecca removed a big leaf from the mum's mouth and then one of the other cows made its way over for a drink.

I launched What3Words to tell the police of the neglect when we turned to see a woman standing at a gate. “Are these your cows?” I shouted over? “Yes, she replied, but still stood behind the gate just looking at us. Rebecca then piped up to say “they have no water. We have tipped the trough and they’ve had a drink but your water tank thing is broken”.  The woman made a light-hearted joke as if to say it was the cow's fault and that the thing must be blocked. She told us that it was full last night. We all doubted that.

9.55am – We reached East Farndon and Rebecca did a strip dance by removing the bottom half of her trousers to reveal her shorts and Debby did some pumping action at the local well. After the cow incident, we needed a bit of a laugh and a giggle to boost our spirits.

10.10am – which way? There were two Jurassic Way signs going in opposite directions. Talk about confusing!

10.30am – We stumble across a tree that is shaped like a giant rabbit 🐇 with big floppy ears! (See photos).

11am – Over Dicks Hill and into the bush!  Saw a strange breed of sheep 🐑 which had teardrop black marks on their eyes. If you know what this breed is then let me know. One male sheep had a massive ball sack! I’m talking HUGE! (Nearly hanging on the floor!). I felt rude taking a photo though.

12pm – We reached the village of Sibertoft with its piggy 🐷 greeting. Right, where is that pub? Squiggle of the day as we circled the village hunting for the pub. We eventually found the Red Lion Pub. It’s closed but we have a picnic bench and shelter whilst we all get our jetboils out and make a brew. Feet aired… that’s better.

🔑 The landlady just came out of the door. “Are we ok being here?” I asked. “Yes, no problem she said as she locked the door to the pub. She then opened a window behind me and hung the keys to the pub on the inside of the window. Then she told us she was going for a walk with a friend and ran off.  Yep! The keys were just dangling there for anyone to take! The discussion arose about what we could do vast amounts gin, nobby's nuts and chocolate.  Only in a village!

1pm – We see a sign for the Reservoir Walk, but there is no reservoir in sight! We pass through lush green meadows, see a UFO house and rolling hills. We discover that our new technique of getting through a kissing gate does not work 100%! Yep, those with big boobs at a certain high have a tendency to get stuck and need rescuing!

We pass through a medieval site. Discussion on toilet habits in medieval times takes place. Did you know that some castles have planks of wood with holes hanging of out window so people poop 💩 into the moat? They also used toilet waste as a way of defending the castle.

1.45pm – Sulby Reservoir… ah! That’s why they call it the reservoir walk! Ponies, shaggy sheep with horns and dodging bird/geese poop as we cross the bridge over the lake.

3pm – The heavens open just as we get to the outskirts of Welford. It went from a light drizzle to full downpour as we navigate stile after stile. I so needed to loo. This village was such a tease. The first pub was derelict. Then there was a house called The Wheatsheaf Pub, another one called Coach & Horses Pub. Where is the actual pub??? I need the loo!! A man had told us that it was down the road near the canal. Rebecca and Debby stopped at the Post Office while I ran ahead to get to the Wharf Pub. I made it just in time! You have never seen me sanitise my hands that quickly it wrote my name and number in the checking in book! I went straight to the toilet and didn’t even take off my rucksack to have a wee! I ordered three Becks Blue Beers! We needed it. The girls joined me and as our socks were hanging from the radiator we checked the weather forecast for the next few days. Not good! Tonight we have thunderstorms all night. The rest of the week is not too bad but tonight does not sound like fun.

Decision made. Tonight we would go home and then reconvene tomorrow morning at the starting point.

We still have 3 miles to do before we reach Elkington where husbands and sons would be collecting us.

3.30pm – I receive a text from an AG club member, Bobbie, saying “I’m walking from Elkington to Welford, so should hopefully bump into you and walk back with you guys”.  Whoop! After a few text messages back and forth (in the rain!), we see a little figure appear in the woods. It’s Bobbie!!  Not only does Bobbie walk with us, but she also helps with a lift home. How cool is that?

As I type I'm sitting on my couch in a warm home, having spent the last few hours eating homemade chicken curry and having a soak in the bath! My clothes are clean and life is good again.

Back on the trail tomorrow, heading for Braunston.