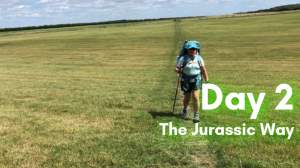 The one with the limbo dancing 🕺, a few squiggles and a full English treat!

WEATHER: very windy today but the sun shone and no rain.

Another fabulous hike that started around 7.30am, by 12.30pm we had reached our destination for the day, Gretton, so decided to push on after some lunch. Gretton has three pubs, but none were open. We treated ourselves to a taxi ride to Nearby Corby and spent 1.5hrs in Wetherspoons! (Eating, charging phones, resting weary bones, enjoying the sunshine in the garden). Taxi back to Gretton to hike another 3.6 miles to Rockingham. We are now camped in a beautiful orchard, near a stream. It’s been a long day but brilliant.

MY RAMBLINGS AS THE DAY UNFOLDED

3am – 🐈 I woke up with a jolt as the friggin ginger cat was actually sitting on my head! WTF! You have never seen me move that quick! I’m now outside my tent while the cat is inside making friends with my pillow. I’m not happy and super grumpy!

4.30am – 🐓 I finally manage to drift off to sleep and the cockerel decides that’s it time to do its thing! Cock-a-doodle-do! I give up! Sleep time is declared over and I need coffee!

Our goal today is Gretton.  As we already made a dent in today’s mileage, then Gretton is only 10 miles away so should be fairly easy.

8am – We are following the Jurassic Way signs and end up outside a huge Manor House. Rebecca checks the app and we are off-trail. Oops! Let squiggle number 1 commence. This involved some limbo dancing under a barbed wire fence (video to follow!) Debby was hilarious!

8.30am – Where are we? I’m sure we’ve already seen this car park.. twice? Squiggling in the woods was quite funny.

9.30am – We reached Barrowden and squealed with delight when we saw the signs that the tea shop was open. Coffee, coffee, coffee! This is a very posh village, and I felt rude taking photos of peoples houses, but boy, there is some money here! (Says three smelly hikers as we pose in front of the duck pond!)

The conversation changed to “Where is the strangest place you’ve ever had a wee?” Rebecca told a brilliant story about a mountain and Majorca!

My little trash bin clip thing keeps ending up on the floor. Rebecca starts calling it “Ben the Bin” and now we all call it that (you had to be there)!

11.38am – Rebecca was in front of us and suddenly turned around and started running towards us? She then ran straight by us like Forest Gump! You ok? Out of breath, we heard the words “train coming”. Debby and I looked at each other a bit confused. Rebecca stopped running and beckoned us to come and look. She was spot on. There was a train, moving very slowly over this gigantic viaduct! It had over 80 arches!

12.45pm – We reach Gretton and despite there being three pubs and a coffee shop in the village, none were open.  We need food! Debby called a taxi, Wetherspoons it is then!

I was super impressed with the way Wetherspoons are dealing with social distancing, and track and trace. Recharged our phones and our bellies. The menu choice was limited, but I had a full fry up, and the others also ate full meals. We then took our stuff out into the garden and Rebecca found a new best friend. Let’s call him Old Man Bob. Bob was a little drunk and couldn’t figure out what Rebeccas water bladder hose was. “Are you on medication?” We giggled. “Where are you from?” Was his next question. I responded with “Daventry”. His eyes lit up as he then confessed that he used to live with the Jesus Army in Daventry but it didn’t work out. Bob then moved on to his next victim at table 120!

5pm – Wow! Rockingham is beautiful. The whole village must have got together and voted on the dark green was the theme for the village. Every door, fence panel, the window frames are painted in the same green colour. It really unites the village and looks stunning.

We were on the hunt for the tea shop and got there just as the owner was packing up. I explained that we were looking for somewhere to camp and he offered his garden. It was very windy and his garden was quite exposed to the elements, then his eyes lit up as he announced: “I have an idea, follow me!”. We were intrigued and followed him around the corner. Tadah! He showed us a very small gazebo that has four walls. You can all sleep in here if you want! Debby said, “I don’t think so!” And Rebecca agreed with Debby. Oh well, thanks Dewayne, we will try our luck further on.

7pm – Rebecca found an awesome campsite. We are in a very lush orchard (apparently they make cricket bats from the wood). A stones throw away is a stream so we all had a paddle and topped up our water bottles. We can hear the wind, birds chirping and a few people have walked by.

Time now is 8.20pm and I’m pooped (oh yeah, I used my poop trowel for the first time today!)