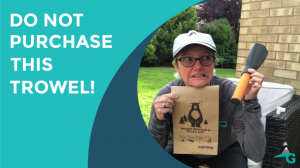 Do not purchase this awful poop trowel

When I review a product, I usually talk about the pros and cons, but this review is a little bit different – mainly because there are no pros!

I love the idea of this little trowel. The weight was absolutely fine and even though I was tempted to purchase a lighter trowel such as the Deuce of Spades, I opted for this one as it had a neat little handle where you could store away toilet roll. The handle was rounded, which meant that it wouldn't dig into my hand and I was quite excited when the little package arrived.

I thought I was doing something wrong as I was unable to open the lid of the trowel to get the toilet roll inside. My 17-year-old daughter saw me struggling and declared that she would figure it out – 10 mins later and she threw it back at me saying that it must be faulty!

I hopped onto YouTube but there are very few reviews of this product. There was one guy who spoke in a foreign language, but it looks like he had also given up and taken the trowel to bits.

Then the handle broke!

I eventually got the end of the handle off and managed to secure 12 x compression towels into the end – but then I couldn't get them out again. The handle which is secured by a little metal pin kept slipping over the plastic which caused my hand to get caught in the plastic. There is no way you can use this to dig an efficient hole!

Please do not buy this product as it is absolute crap (no pun intended). I would, however, recommend the human poo bags as seen in the video.