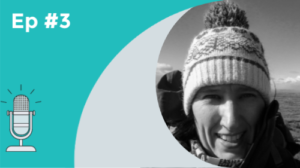 SUMMARY OF THIS WEEK'S SHOW:-

“The Earth has music for those who listen.” – William Shakespeare

Hello everybody and a very warm welcome to episode 3 of the Adventure Geek Walking Club Podcast.  This is a show for those who love everything to do with the outdoors, backpacking and hiking. Hopefully, we have something for everyone in each episode. So without further ado, let me explain the contents of this week's show.

#1 – We always start the podcast with a bit of a quiz in the form of “guess the sound”.  This will be the sound of an animal, bird, or something to do with the outdoors.  I will always give you a bit of a clue, but the answer will be revealed at the end of the show.

#2 – The second segment continues with the adventures of Derek & Doreen. This week the pair are off on their first proper walk…. The Towcester Hulcote Walk!

#3 – Segment number three is an interview with Rachel Hinds, who has a genius way of keeping active during the lockdown period.

#4 – The fourth segment is an education slot. This week I am sharing a magical app, which works in conjunction with the OS Maps app.

So, without further ado, let’s get this show on the road, and see if you can guess this week’s soundbite.  I did promise a bit of a clue, so I googled “unknown facts about this animal”.  Google told me that this animal eats its own poop!  Here’s the sound….

The answer to the soundbite will be revealed at the end of the podcast.  Over to Nigel for this week’s episode of Derek & Doreen.

Thanks, Nigel. If you have been on an Adventure Geek walk then you can probably relate to some of these tales. Please let me know if you also started laughing at the same point I did!  Nigel, we need to keep the giggles in as they are hilarious!

I am now going to transition over to this week’s interview with Rachel Hinds who talks about her new little hobby which involves climbing a few mountains!

Thanks for your time today Rachel, you were awesome.  For our listeners, you can download the spreadsheet template that Rachel has created as well as reading the show notes for this episode over at www.adventuregeek.co.uk/PodcastEP3

Right, time for this week’s education slot.  For those of you who are using the OS Maps app, don’t you sometimes find it frustrating that you need to pinch and zoom before you find that little red arrow to show you where you are? Today’s app, called OS Locate is brilliant and I use it all the time.

Used alongside your Ordnance Survey map, OS Locate is a fast and highly accurate means of pinpointing your exact location on the map, anywhere in Great Britain. If you have lost your bearings or simply would like a little reassurance, OS Locate is the ideal companion for all enthusiasts of the great outdoors.

The app not only displays your coordinates, but there is a little icon on the right-hand side for OS Maps.  Press that and then your OS Maps app is launched to your exact location.  No more pinching, scrolling and zooming to try to figure out where you are – it opens up at exactly the right place.

Before we go into our finale with “Janet & John go walking” I would like to reveal the soundbite answer from the beginning of the show.  For those of you who guessed a rabbit, you would be right! And yes, a rabbit does it eats own poop, they can’t vomit, their vision nearly covers 360 degrees and their teeth never stop growing!

We are going to end the podcast with the amazingly talented Shiny Shoes as he reads the lates Janet and John adventures.  Over to you John.

As I draw the podcast to a close, I would like to leave you with this final thought from William Shakespeare

“The Earth has music for those who listen.” – William Shakespeare

Remember that you don’t need to take any notes as we do all that for you. Links to anything that has been mentioned in today’s show can be found at www.adventuregeek.co.uk/podcastep3

Posted in Blog
← EP2 – An Interview with Sue Ferrie | UK walks | A film to watch | and moreEP4 – Mental Health Advice during Covid19 | A best selling Adventure Writer and much more. →