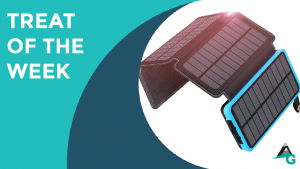 Treat of the week

When Jason joined me on the South Downs Way I had "gear envy" as he showed me his new solar charging pack.  This thing was heavy and I initially dismissed it for any type of backpacking trip, but when he charged his own phone and numerous of my gadgets and it still had three bars left I knew I just had to get one!

I suffer from anxiety when my phone drops to below 50% capacity.  I already have a smart battery case for my iPhone X, and a small Belkin power pack, but I would still run out of juice after 24 hours.  My phone would be constantly on airplane mode which means that my husband had no idea where I was, and I was unable to receive text messages or phone calls.  I use my phone for vlogging, photos, editing, writing and most importantly, I use it for navigation.  The thought of being lost in the middle of nowhere fills me with dread and I am not one for grabbing a map before I leave.

This power charger has some awesome features and some naff features.

Posted in Blog, Gear and tagged get outside, power bank for hiking, power brick, solar power pack, treat of the week
← MicroAdventure #6 – THE ONE WITH THE ROWING BOAT!BOOK REVIEW – My MIDSUMMER MORNING →