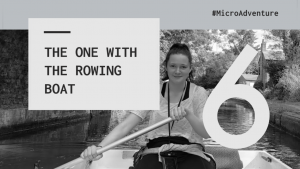 My plans were to walk the Gritstone Trail this week, but after leaving it until the last minute for research, I found that there were no campsites or B&B's on route.  If I wanted to camp then at the end of each day I would need to take a taxi or cab, or wild camp.  My husband never says no to my adventures, but on this occasion, he made his feelings known as he explained that camping in the wild, on my own did not sit well with him.  Fair enough I thought, so I need to change my plans.

I messaged a friend of mine who lives in Milton Keynes.  "Bx, do you still have that canoe that I could borrow?".  Immediately the message came back "yep, when do you want to borrow it?" she replied.  "How about Wednesday?  Is that ok?".  "Absolutely!" she responded a bit too enthusiastically! Right, that was my new plan.  I would have myself a new adventure.  I would collect a canoe (or was it a kayak?, they all look similar to me) at 11.30am on Wednesday morning and then paddle as far as my arms would carry me.  Wherever I stop I would put up my tent (somewhere safe, and not far from home or my brother's house) and then paddle back the next day.  A little midweek adventure.

Monday evening, my nearly 17-year-old daughter decides that she would also like to join me on this adventure.  She is bored at home during the holidays, so it sounded like fun.  A new text "Bx, does your canoe/kayak fit two people?".  "Nope, but we do have a rowing boat that you can borrow that will fit you both as well as your kit for camping". - Perfect!

We reach Fenny Lock at 1 pm and my friend Gordon showed us around.  He explained all about the different aspects of the boat and how a lock works etc. We delayed and procrastinated leaving by going to the pub for lunch and I enjoyed a glass of wine to build up some dutch courage. I was a bit nervous!

Maisy is the name of our cute little rowboat. It’s a glass fibre boat and all our gear fits in, with room to spare.

Alex helped us through the lock. He was an absolute gem!

As we paddle off in a unique zig-zag style we go round the first bed to a round of applause from  3 wise monkeys. An old man and two elderly ladies were sipping wine in their garden and gave us some encouragement!

We reached our bridge and navigation was fun! We didn’t hit anything so that was a bonus! I did scream rather loudly when Rachel tried picking blackberries though as Maisy wobbled like hell!!

Many Narrowboats passed and told us how well we were doing. (More encouragement, these boat people are nice!)

An old lady in the distance was walking her dog. Within minutes she had passed us. We were very slow and we agreed it would be quicker to walk. So that’s what I did! I got out of Maisy and grabbed the rope. For the next 10 mins, Rachel lazed in the little boat whilst I pulled her along like a packhorse! Now we were making some mileage, rather than zig-zagging across the canal.

The towpath then reached a moored boat so I had to hop back in and start paddling again. “How far have we gone?” Asked Rachel. I checked my AllTrails app and declared 1.2 miles. She raised her eyebrows at me and I could see the novelty was wearing thin.

Scream!!! Rachel has a paddy fit because a spider is in the boat. “That’s it” she declared. “I’m going to walk and pull the boat”. So this time Rachel got out and became the human packhorse! We spotted many herons, white birds (not sure what they were, but they were not swans) beautiful dragonfly’s, and a very ambitious frog who swam alongside us for a while.

We agreed that we would take a break at the next pub which happened to be around the corner. The Plough sign was like a beacon and a welcome sight. We grabbed our valuables and padlocked Maisy then headed into the pub. It was lovely to sit inside, sipping a glass of cold white wine and watch the world go bye. “Shall we call dad?” asks Rachel! No way! I’m not giving up yet!

We gave up! I phoned an Uber, and a nice driver from Afghanistan called Waise drive us to the nearest campsite.  We had paddled 2.2 miles and it had taken us three hours!!

We arrived at Gullivers Land Campsite and our tent was pitched quickly. We found the restaurant after a trail through dinosaur land! Yep, kids are everywhere here and our tent is right next to the play area. Part of me regrets not wild camping but I understand why Rachel (and hubby) were both not keen on us camping illegally.

It’s now 8.40pm and Rachel is fast asleep next to me. Someone just tripped over our guy lines which startled both of us! It’s been rather eventful and tomorrow we do it all again as we head home.

Didn’t sleep brilliantly, mainly due to being next to a children’s play park and the kids shouting “fire” every 5 mins!

7 am - made our way to the restaurant for breakfast. Discovered it opens at 8.30am! Detour via dinosaur land and giant penis!

8 am - all packed up. Uber ride to the Beefeater. Kids go free! Result! Eat loads then another Uber back to Maisy.

9 am - I needed to blag a dustpan and brush from a nearby narrowboat so that I could give Maisy a clean as Rachel refused to get in the boat due to all the spiders!

We get off to a really good start and the new system of two paddles for Rachel on one side, then two paddles for me on the other, keeps us in the middle and going at a good pace. We recognise places from yesterday and spot new things that we didn't see.  We sang to Lucy Spraggon and chatted whilst we paddled.  Today was so much easier than yesterday.

11 am - We were back at the lock and where we had started!

What a fabulous adventure - one for the memory bank for sure!