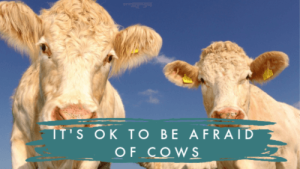 I admit it, I am afraid of cows!

A walking club owner afraid of cows is a bit like Doc Martin being afraid of blood!  How on earth can you lead walks in the countryside and have a phobia of cows?  The answer is that I let other people take the reins whilst I cower at the back of the pack hoping and wishing that the cows will stamp all over my customer first before they get to me!

But, having recently walked the South Downs Way, where I had to pass through fields and fields of cows every day, on my own, with no cow whisperers in sight, I think I am now ready to face my fear!

But before I take you through my reasons why it is ok to be afraid of cows, let me share with you the day I realised that cows are dangerous.  I was out on my pushbike with my then eight-year-old daughter.  We were having a fun day hunting for plastic boxes in the countryside, a sport known as geocaching.  We had enjoyed a picnic lunch and we packed up and hopped back on our bikes following the GPS to find our last geocache.  We opened the gate to a field and in the far distant corner, I saw just two cows.  No baby cows, no herds, just two lonesome cows.  One was ginger and the other one was black.  We only had to cross the field and it was on a public footpath so I gave the nod to Rachel and she started pedalling.  I kept Rachel to my right and the cows (even though they were a long way away) were on my left.  The cows must have sensed an invasion in their field as they started running towards us.  "Can you pedal faster Rachel?"  she looked over and saw the cows heading towards us.  We both picked up the pace and we're now halfway across the field but the cows were gaining on us!  Blimey, these things can run fast when they are on a mission.  I then heard Rachel shouting out loud to herself "Cows don't hurt, cows don't hurt, cows don't hurt".  The ginger cow was now running faster than the black cow and it was kicking its legs out at the back.  It looked seriously pissed off with us being in the field!

With a quarter of the field yet to go I was planning an exit point which involved throwing Rachel over the fence and sacrificing myself to the cows!  We literally got the gate at the other side of the field with seconds to spare and both of our hearts were beating so fast you could have heard them in the next village.  We hugged each other and then she burst into tears.  "I thought you said cows don't hurt mum" - um.  Perhaps we shall dodge them in the future!

You may think cows are not something to be afraid of, but I will share with you my thought process as to why my fear is rational and justified! 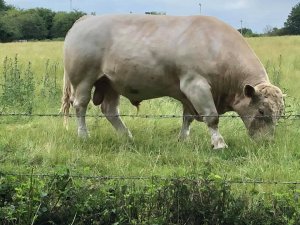 This bull was spotted on our recent Milton Malsor walk - lucikly it was behind a fence!

Have you ever stood next to a cow or even a bull?  OMG, those things are huge.  If a cow makes a decision that it wants to stamp all over you, what chance will you have?  Perhaps if I was a tall lady

or even a bloke then I may not be as fearful, but their size is not something that you can argue with is it?  I am not afraid of squirrels, rabbits or even sheep, but anything that is bigger than me will have an advantage.

Cows stare and it is kind of freaky.  They have that look in their eye as if to say "what on earth are you doing in my field? I will give you to the count of three and then I will chase you out of the field... 1, 2..."  Some cows have positively evil stares, and have you noticed that once one cow starts staring then the whole herd joins in with a joint stare?

As mentioned in the first story, cows can run quite fast when they want too.  They have four legs, which is two more than I do, so they can probably run a lot faster than I can. Most people think of cows as gently grazing in the field with little oomph.  If a few cows decided that they want to go on a stampede then you have best not be anywhere near them!  Just look at the old Western Movies when the cowboys are trying to capture the cattle - you can't tell me that cows are slow!  They know how to run when they want too! 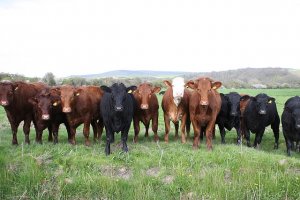 The cow "stare" is very intimidating!

Cows are naturally curious especially when they are a bit younger.  Not that long ago I was scoping out a new walk and I had to cross a field of cows.  It always takes me a while to pluck up the courage and if there is an alternative route then I will always opt for that, but on this occasion, I had to be brave.  I phoned my husband, but he didn't answer, so I face-timed my best friend instead.  I knew I would need some support.  I got halfway across the field and I was happily chatting to Julie on Facetime which was a good distraction and then I heard the thud of lots of hooves coming my way.  Julie was trying to calm me down but I was freaking out big time.  I was breathing heavy and I knew that a few swear words have escaped my lips.  I also knew that she was trying not to laugh, but I could hear both her kids in the background laughing their heads off at my expense.  (I appreciate how funny it must have looked and I forgave them afterwards but at the time I was not in the mood for being laughed at).  People had told me not to run, so I was just walking very quickly but the cows were soon within touching distance and I had no-where to go!  There was a hedge to my left and I had cows all around me.  I was trapped.  I was nearly crying and I didn't know what to do.  I was saying "shoo" but not in a very confident way.  I sounded more like a tiny mouse squeaking, rather than a confident cow shooer (I think I just made up that word)!  I moved one step and the whole heard moved one step.  I screamed and they gave me the "stare" (see #2).  Crossing that field, one step, one scream at a time took forever.  As I finally got through the gate I breathed a sigh of relief.  I thanked my bestie for all her help and carried on to the next field... guess what was in the next field. Yep, more friggin cows!

I have walked that route just once since that day... refer to my style of leading a walk when there are cows present! It is not good for business.

#5 - Cows officially are the most deadly large animals in Britain

If you don't believe me then check out this article!  An agricultural committee is to keep the public and farm workers safe from cows after they were revealed to be the most dangerous large animals in Britain.  Most of the people that are killed by cows are on public footpaths or a public right of way. More often or not the danger is heightened if there are calves and their mothers in the field together.

My advice would be to avoid cows as much as possible, and if you do see calves in the field then take another route!  I would also mention that it is best to avoid walking through a field of cows with a dog!

If you are a little afraid of cows then this video may help. (even is it is 8 years old the advice is still valid).