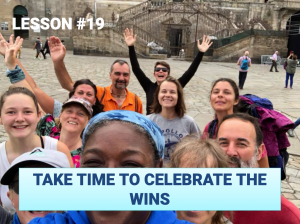 We left Pamplona in the Spanish heat and started our way up towards the famous metal/iron sculptures at Alto del Perdon.  If you have seen the film "The Way" this is where Yoast realises that you can actually bike the Camino rather than walk it.  Anyway, as I reach the top, I see a noticeboard that explains where we are, but I was in too much of a hurry to take any notice.  I snap a few photos of the statues and glimpse at the view before taking a swig of water and preparing to move on towards Puente La Reina.

Was he a Camino Angel?

I felt a tap on my shoulder and as I turned around an elderly man with piercing blue eyes looked right at me and said: "take a few minutes to look at where you have walked".  He guided me to the noticeboard/map.  He took his walking stick and started to explain the map in front of me, and was then pointing to the mountains from which I had walked over in the last 5 days.  Blimey, look at where I had walked!  Did I really cross those mountains?

The old man smiled at me and I felt as if I had known him forever, but I had never seen him before.  He asked me what my name was and where had I come from.  He then said something that made me stop in my tracks.  "Julia, don't always push forward.  Sometimes you need to turn around, see how far you have come, and celebrate these moments".  I hugged my new friend and thanked him for his words of encouragement.  I am not sure what happened to him as I never saw him again, but those eyes will stay with me forever!

I grabbed my sitpad and decided that I would take a few minutes to celebrate reaching this check-point on the Camino.  As I crunched away on some cashew nuts and raisins I found my mind wandering to other times in my life when I didn't celebrate my achievements.  I suddenly became overwhelmed with sadness as I remembered collecting an award for being "The Most Innovative Woman of the Year" in 2010.  The award was presented to me at an event in Derby by Rachel Elnaugh (from Dragons Den) and also Maggie Philbin (Tomorrow's World).  Why was I sad? It was a huge achievement and not a soul was there to celebrate it with me.  It was not anyone's fault but mine as I had not informed anyone l that I was going, let alone been nominated for this award.   This memory led to other moments in my life when I had never really celebrated my achievements.  From selling my first business to landing a huge contract for a well known automotive company.  I never even celebrated my first published book!  It appeared on Amazon for the first time and I didn't know about it until I received a text from my husband who had seen it in WH Smiths.  What was wrong with me?  Why did I rush through life?

I know that the elderly man that I met that day will never read this blog, but I would like to thank him for forcing me to stop and think about my wins. When we finally reached Santiago we celebrated in style!  We also waited for others to arrive so that we could help them celebrate their achievements as well.

Those moments in life when you have achieved something of significance are rare, so please take time to celebrate. Life passes by so quickly and we move onto the next thing in an instance.  When I am out walking with the Adventure Geek walking club I now urge people to stop and look at where they have come from.  These achievements, big or small, are what moulds us into the person that we are today.