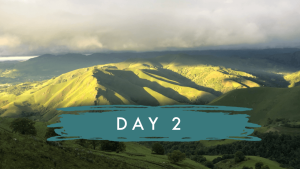 Listening to a French rock band playing English songs until the early hours sounds lovely, but believe me, it wasn’t! I’m not sure if it was the wine, music or pure excitement but I struggled to get to sleep. It’s now 4.30am.  Looking at the positives... the WiFi is really strong (probably because no one else is using it!) so I am able to edit videos! 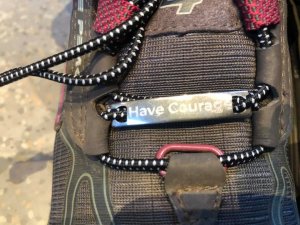 This is one of Caron's shoe-tags.

7.42am - We took the small train to St Jean Pied de Port through amazing scenery. The mist and clouds covering the mountain tops and the gorgeous river flowing at an inpatient rate. Hayley, Debby and Caron all add their special shoe tags to their laces that are engraved with little messages.  I love these little touches that make your Camino feel special.

9.30am Rain covers are placed over our rucksacks as drizzle is in the air but our spirits are not dampened. We leave the cute French railway station in search of the Pilgrims office. I feel that I know this route like the back of my hand, but I do recall the first ever time I arrived in St Jean feeling lost and excited at the same time.  Rachel, Julie and I had no idea where we were going back then and we simply just blindly followed the other pilgrims.  Today was different and we led the way with confidence. 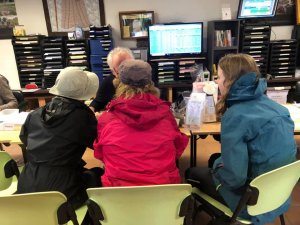 It is now 10.20am and what should have taken no more than five mins has taken forever!   I am unconsciously tapping my pole on the floor outside the Pilgrims office and Rachel says to me "Pineapple".  I grinned.  Pineapple was our "secret word" which means "Be patient".  It was a lesson that I would be re-learning over and over during the next 5 days!  She was right.  I needed to let people enjoy this moment and not rush ahead like I always do.  Debby, John & Hayley were making their way to the little shop down the road where they were looking for walking poles, buffs, hats and a few other bits and bobs.  I said I would catch them up shortly.  Meanwhile, I put my head around the door of the Pilgrims office and Caron was looking very upset and was wiping tears from her eyes.  When they finally stood up from their seats and made their way outside I asked if everyone was ok?  Caron had experienced her first Camino cry.  The pilgrim office host told his rather emotional story which was apparently a rather moving experience.

We all had stamps in our new passports, some had their first few tears and we ventured off into the town to explore. On previous trips to St Jean, I had never ventured into the church or had time to look around.  I was always keen to get going, which is a little crazy as there is not much to do at the Orisson!  It was quite sad that the place has no supermarket now (it has been closed for a while), but the church was very peaceful. We looked around the shops and purchased a few snacks for our hike and I was delighted with the new bracelet that Rachel bought for me.

We enjoyed a coffee, then it was time to go.  Our rain covers were still on our packs, new walking poles were at the ready and we were off!

Julie, Becky and Caron had left about 20 mins or so before us and we soon caught them up. A new little oasis vending machine appeared which was housed in a small wooden hut (what a lovely idea!).

With a hop in our step, we continued the days walk. This first day is steep and I was silently feeling grateful for all the training my walking club had provided. I feel fitter than I've felt in years and today I enjoyed this walk much more than previous years.

Our first stop - Hunto, was closed for Siesta!

I raised my eyebrows when I read that our first and only cafe break was closed for siesta (the sign said 12-3pm closed) - it was 11.58am!  The business person in me was saying "this is crazy! it is the only cafe on this part of the trail.  There are probably around 200 people walking by here during the day and you are closed for three hours?  That makes no business sense at all?" - Pineapple!

But we drank from the water fountain and enjoyed a 20 min rest whilst consuming the snacks we brought with us. Above us were massive birds of prey, and I’m embarrassed to say I’ve no idea what these beautiful birds were. Some were kites, others looked like

eagles or buzzards. I’ve no idea but watching them fly in the wild was quite mesmerising.

Ju, Becks and Caron caught us up and there were high fives all around. Everyone was looking strong and I knew that we were all going to be ok.

Rachel and I were at the front of the pack and we knew that the Orisson (our hostel for the night) was tucked away around the next corner.  We reached The Orisson around 1.45pm (I think?) and this place never fails to impress. The views, the newly refurbished bunkhouse, the food and service were all second to none.  The very nice looking host showed us around and explained how everything worked.  We had a token each for the shower, sheets and pillowcases for our beds, and little charger lockers for our phones.  I smiled as each locker key had a Camino shell attached to it.  Debby was kind enough to make up Caron's bed for her so that she had a pleasant surprise when they reached the hostel.  How thoughtful was that?

After we had all settled in and Ju, Becks and Caron had arrived safe and sound, we made our way up to the main room for our first Pilgrims meal.  We enjoyed a feast of vegetable soup, chicken & vegetables, with rice pudding for dessert.  Becky is a vegetarian and they had prepared a vegetarian meal for her which was great.

The German Guy with 68% Lung Capacity!

There was one guy that everyone was talking about. We had all passed him on the trail. A big German guy wearing jeans, a woollen beanie and a black leather jacket. He had a pilgrims staff poking out of his pack which soared into the air like a bumper car. He was not well and apparently only had 68% lung capacity. He was not prepared for this journey at all. As he arrived at the Orisson we all clapped and cheered. He had made it! Slowly but surely. We then found out that he hadn’t pre-booked his bed, and therefore there was no room at the inn. €75 for a taxi to Roncesvalles... ouch! That smile of achievement vanished and his body language changed. He took his bumper car pack and we saw him leave. Perhaps we will see him again.

The round robins were great and some people shared their reasons for walking the Camino. We had those that were on a spiritual journey, others that were simply out for an adventure. The room was dominated by Swedish and English people.

I took lots of photos of the people and my new pilgrim book is coming along nicely. We played spoons and had good conversations with new friends.

It’s now 10pm and I’m tucked up in my bunk. It’s a bit chilly, and I’m chuffed that I brought my lightweight quilt with me. Snuggled up and listening to the sound of the Pilgrim song (gentle snores in rhythm is quite therapeutic!).

Day one of walking has been brilliant.  The road was not as challenging as I had thought it would be and I was so pleased that everyone managed it without so much as a moan.  I had met some really nice people and this trip is developing into a special Camino already, I just hope the weather gets better!