I'm Off Then has sold more than three million copies in Germany and has been translated into eleven languages. The number of pilgrims along the Camino has increased by 20 percent since the book was published. Hape Kerkeling's spiritual journey has struck a chord.

Overweight, overworked, and disenchanted, Kerkeling was an unlikely candidate to make the arduous pilgrimage across the Pyrenees to the Spanish shrine of St. James, a 1,200-year-old journey undertaken by nearly 100,000 people every year. But he decided to get off the couch and do it anyway. Lonely and searching for meaning along the way, he began the journal that turned into this utterly frank, engaging book. Filled with unforgettable characters, historic landscapes, and Kerkeling's self-deprecating humor, I'm Off Then is an inspiring travelogue, a publishing phenomenon, and a spiritual journey unlike any other.

Read the other reviews on Goodreads. 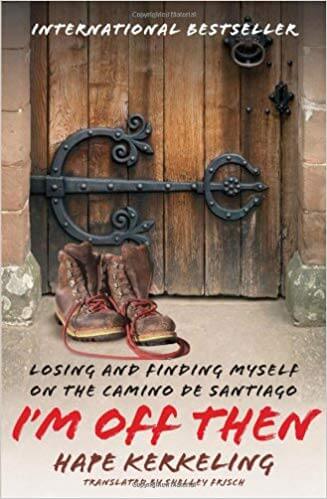 As someone who has walked the Camino a few times I enjoyed the trip down memory lane, but I need to tell people that this book was written many years ago and The Camino is certainly NOT as described.

I found myself getting annoyed that he skipped some wonderful De ruins of the Camino. He even hitch hiked on his first day! I understand his feelings towards albergues but they are not like that nowadays. Most hostels are very clean, sleep rooms of 8-10 people and it’s where you form fantastic relationships. Saying that, I tended to upgrade to a private room most nights, but I wouldn’t berate the dorms.

I know some people criticised the author for commenting on the characters of the Camino but I simply smiled to myself through each encounter. I could recall numerous people that I could have included as nutty or wacko on the Camino!

If I’m honest, I didn’t like him much in the beginning. He was overweight, not prepared, arrogant and certainly not a pilgrim, however as the book continued I warmed to him. After Leon and he found his Camino family, the essence of the trail fell into place for this pilgrim. I could totally relate to the little dog “Pepe” story!

Overall it was not a bad read and it was well written. For me there were no laugh out loud moments but there were a few hidden giggles.

more
Posted in Blog, Books & Films and tagged book review, Finding and losing myself on the Camino De Santiago, Hape Kerkeling, I'm off then
← CAMINO TASTER – MAY 2019 | DAY 1 | TRAVELLING TO BAYONNELESSON #17 – WE DON’T NEED LOTS OF STUFF TO MAKE US HAPPY →