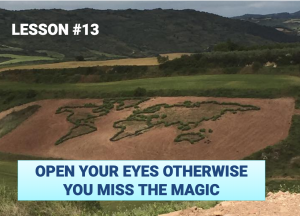 Do you ever wonder what you may have missed simply because you were not looking?  After a few Camino trips I now finally understand what it means to be “mindful” and to open your eyes to what is around you.  Sometimes in life, we are so focused on where we are heading that we forget to stop and take stock of where we are, where we have come from and what is around us.  My life has certainly been a bit of a train track that leads in one direction and that was the road to success.  Picture a horse with blinkers on that do not allow vision to the rear or to the side, that was me.  I was totally focused on the road ahead and often had little concern for what was around me.

As I trundled up yet another hill with my young 13-year-old daughter behind me I could feel the tension rising as she just wasn't walking fast enough.  It was hot and my backpack was rubbing on my sore hips and shoulders.  My head was down and I just wanted to get to the next Albergue which was still another 8km from this point.  I was not in the mood for a teenager to sing Christmas songs out loud, even though it was June!  (Her iPhone was on shuffle and it kept playing the Christmas album which she thought was highly amusing).   As I turned around to nag her once again to get a move on and pick her feet up I noticed that she was in the middle of a photo shoot.  “Mum, come and look at this” she claimed.  I was expecting another cat sunning itself or some other type of animal, but what she showed me was some old agriculture machinery that was on the side of the road near a building.  Frustration was getting the better of me as I didn't have time to waste and I really wanted to get a hot shower and have a glass of wine.  “Very interesting Rachel, now come on”.  “No mum, can't you see it?” her next words made me stop and look as she raised her voice and said “Will you stop rushing everywhere and take a moment to look at what is around you mum, the bed will still be there in a few hours, but this won't”.  She beckoned me over and with draping shoulders I obliged.

As I stood next to my daughter and stared at the machinery in front of me I still didn't get the fascination.  So, with raised eyebrows, she took her Nordic pole and pointed to the wall behind the machinery.  “Look at the shadow mum, can't you see it?”.  It was then that I realised what she had seen.  The way in which the machinery was constructed had cast shadows of lots of pilgrims in a row against the wall.  Once the penny dropped I was totally mesmerised by the cleverness of this sculpture.  In a few hours time, the sun would be shining in a different direction and most people would just walk on by like I nearly did.

From that moment on, my mood completely changed and as we met people we started to ask them if they also saw the machinery with the pilgrims.  Not one person saw it which made me realise that others were also just walking without really paying attention to what was around them.  For me, it took a 13-year-old to point out the error of my ways.  There is an old saying “wake up and smell the roses”, well, that was certainly a wake-up call for me. 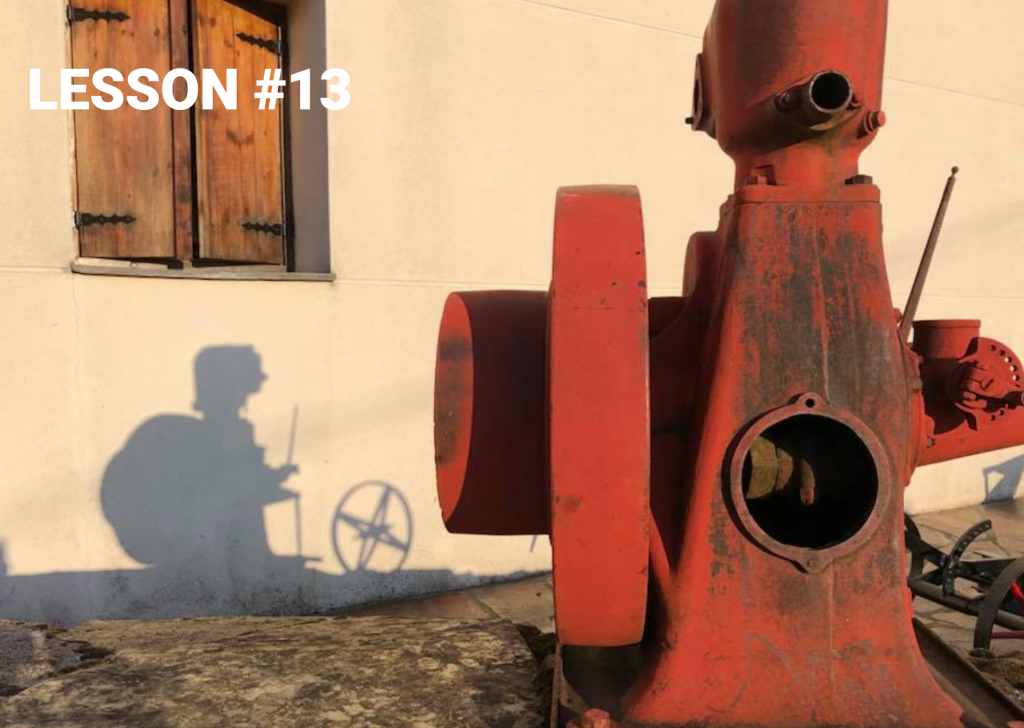 A field of the world!

A few days later, once again I was ahead of Julie & Rachel as we meandered through yet another Spanish sleepy village.  Again, it was a hot day and the sun was beating down on me.  I stopped on the outskirts as I waited for them to catch up.  I took a bottle of water from the side of my pack and as I looked out to the view in front of me whilst taking a well-earned swig of warm water I spotted a field in the distance.  Isn't that the world map I wondered to myself?  Even though the Camino route was leading to the right, I decided to take a short detour and get a better view.  OMG!  Yes, it was a field of hedges that someone had carefully created a whole map of the world.  I wonder how many pilgrims had walked by this very spot and not seen it?  I was very excited and ran back into the village to tell Julie & Rachel about the wonderful field that they were about to witness.

I assumed it was made from hedges, but after a Google / YouTube search I found a video that showed it was actually made from tyres for World Environment Day in 2012.  Apparently, they used over 1000 tyres which were then planted.   Very clever!

Nowadays, my eyes are more open than closed.  I enjoy mindful walking and I often listen out for birds and spot things such as thatch art or unusual signage.  I take time to enjoy my surroundings rather than racing on to the next thing.  The phrase “blink and you will miss it” is so true, but it took a 13-year-old to show me the error of my ways.  Rachel, if you ever read this blog then I want you to know that you are one very insightful young lady and I love you to bits.  xx