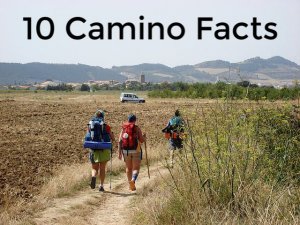 As I am finalising the preparations to take my very first group of pilgrims across the Pyrenees, I thought it would be a nice idea to put together some facts about this trail that will tie everything together.

There are all sorts of myths and legends that go along with the Camino, but here are fifteen facts that I hope you may enjoy.

However, the trail has many different names.  From ‌The Way, The Camino, The Way of St James, St Jacques Path, St James Path, St James Trail.  St James was one of Jesus's disciples and his remains are said to be buried beneath the Cathedral in Santiago.

The Santiago Compostella is the name given to the certificate of achievement that you are awarded at the pilgrim's office in Santiago.  You can only gain your Compestella if you have walked 100 km or cycled 200 km.  But, did you know that Santiago de Compostela means “St James of the Field of Stars”.

Yep, most people tend to think that there is only one Camino route to Santiago, but in fact, there are 13 different routes.  The most popular route is the Camino Frances which has the best infrastructure, however, other trails are becoming increasingly popular. 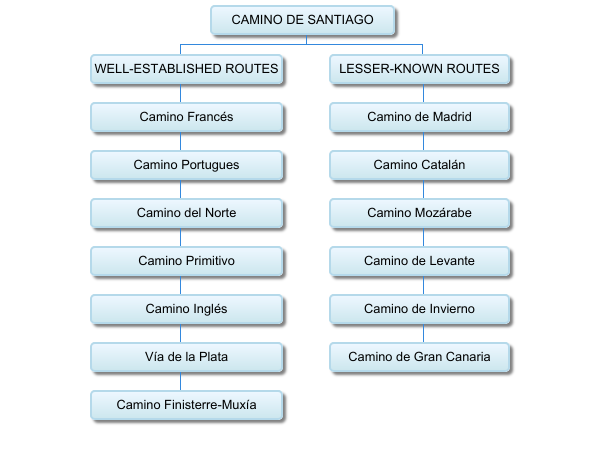 Did you know that 25th July is St James Day and if this day happens to be a Sunday then it is considered a holy year?  The Camino is always exceptionally busy during a holy year and from experience, Santiago is literally a 10-day party/fiesta during this period.  The atmosphere is amazing, but if you like your sleep then it may be best to avoid being in Santiago on 25th July (or around this date).

#5 - Santiago De Compostela is NOT the end of the Camino

Many people believe that the end of your Camino is when you arrive in the plaza in front of the Cathedral in Santiago, however, this is not true.  Yes, you can collect your certificate at the pilgrim's office, but purists will know that the 0.00km milestone is still a further 78km (48 miles) away at the "end of the world" known as Finisterre. There is something very final about arriving at the lighthouse and then spending some time on the rocks looking out to sea.  If you are looking for "closure" for your Camino, or you want to know that you have completed the whole route, then the additional mileage is a worthy trip.  It will take approximately 3 days to walk this trail, and you can grab an additional Finisterre passport at the Pilgrims office in Santiago.

If you are staying in public Albergues/Hostels known as Municipals then you will need your Camino passport or credential to gain entry.  If you are walking with your pack then you will be given priority booking.  Those who had their rucksack transported by a luggage transfer service or those that are cycling will not be given priority service and will often need to stay elsewhere.

If you are only walking 100km (often from Sarria on the Frances route, Porto on the Portuguese Route, or Ferrol on the Ingles Route), then you will need to acquire a minimum of two stamps in your credential to gain your Compostela in Santiago.  Believe me, they do check!  If you are walking a complete route such as the Norte, Frances or Portuguese trail then you simply need to acquire one stamp a day.  (I personally enjoy collecting the stamps in my journal and passport from all types of cafes, churches, hostels and restaurants).

8 - The Camino Primitivo is the oldest route

I have not yet walked this route but apparently, it is the most challenging of all of the Camino trails. It starts in the City of Oviedo, in Asturias, to Santiago de Compostela and is 321km in length.  It can be completed in two weeks and can either be a separate walk or you can combine it with the Frech or Northern Way.  This is “The Original “Way” and might well have been taken by King Alphonse “The Chaste” who played a decisive role in confirming that the remains unearthed in Santiago de Compostela did indeed belong to the Apostle Saint James.

This particular trail is challenging at the beginning due to the various mountains that you have to climb.  If you are looking for solitude then this may be the trail for you.

#9 - Traditionally, Pilgrims start their Camino from their homes.

I have known some people who have walked from their front door in the UK and made their way to Santiago de Compostela.  If you are a "purist" then this is the correct way to walk a Pilgrimage.  For those of you who are from the UK, you are able to collect a Camino Passport from Canterbury Cathedral and begin your pilgrimage there.  That's a long walk!

The Camino Shell - There are many stories, legends and myths trying to explain the ancient link between the scallop shell and the Saint James Way. The scallop shell is said to be a metaphor, its lines representing the different routes pilgrims travel from all over the world, all walking trails leading to one point: the tomb of Saint James in Santiago de Compostela. However, it is open to interpretation. Which side points to Santiago?  This is something that you will need to be careful of when walking through the different regions.  Some say that the base of the shell points towards the way you should be travelling, but in other regions, it is the other way round.   In my opinion, I never take any notice of which way the shell is pointing, I just see it as a sign that I am on the right track.  I take my directions from the yellow arrows or the Beun Camino app.

The shell is worn on your rucksack as a "badge of honour" and is a symbol to others that you are walking the Camino.  Originally, the shell was awarded at the end of your journey, however, nowadays we collect them at the start.  Pilgrims in days gone by would use their shell as a "bowl". It was a good measurement for food and also as a drinking cup.

The Yellow Arrows were originally painted by Don Elías who was a bit of a Camino Visionary and pioneer for the trail.  In 1984 (so not that long ago), he set out in his Citeron GS which was loaded with yellow paint and started to mark the trail with yellow arrows (from Roncesvalles).   Don passed away in 1989, but the Camino as we know it today would certainly not be as popular without his dedication to marking the trail.