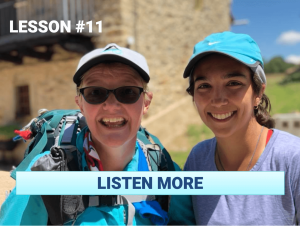 If there is one thing that I am good at in this world it is talking! I am a terrible sufferer from “monkey mind” which basically means that I find it difficult to switch off my thoughts.  I struggle to meditate, I constantly burn things when I am cooking, and I have a tendency to pick up snippets of a conversation rather than being fully immersed into what the other person is saying.  I have mastered the nodding and grunting in the right places so people do not know that I am not actually listening, instead, I am planning adventures, or writing blogs in my head, or even creating long to-do lists.   Unless the conversation needs my full attention, I am usually quite good at doing two things at once.  As you get older, multi-tasking becomes increasingly difficult and nowadays I get “mum, you are not listening again!”, or I find people asking me to repeat what they have just said so that they know I was listening. 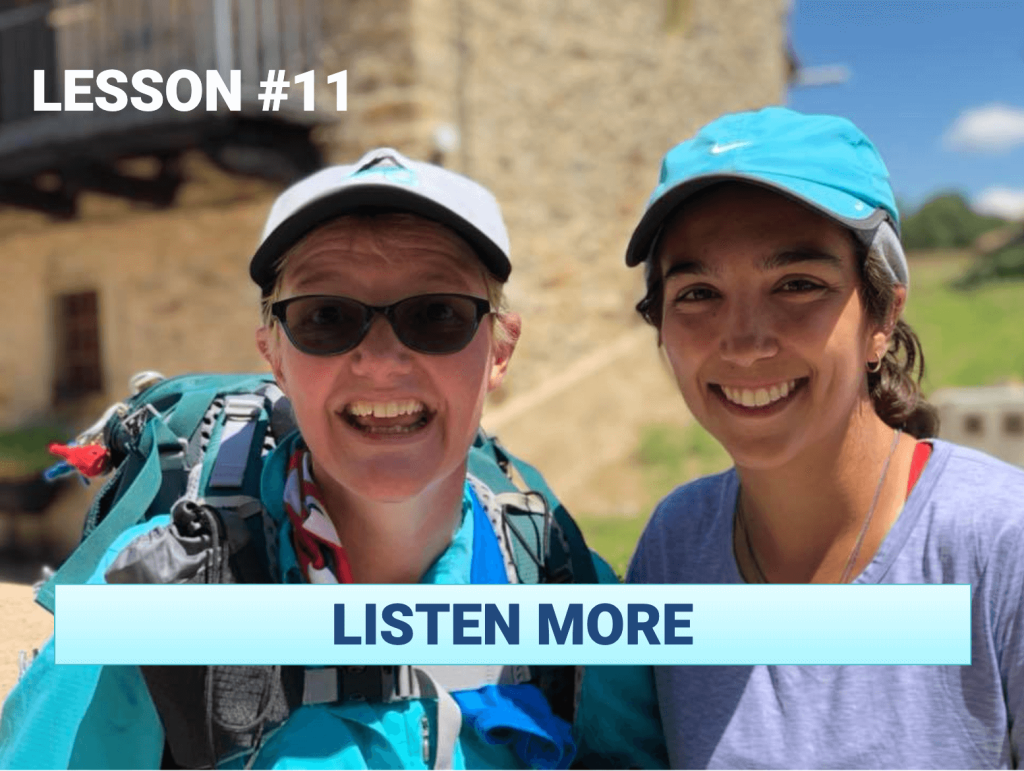 Me & Cristina, the young girl who lost her mother in the Santiago Train Crash. Click here to read her blog

Now that I am aware of my downfalls, I can do something about it and the Camino is a great place to master the art of listening.  If you can imagine that the only thing to occupy your thoughts is eating, walking, sleeping and repeat.  You may think about where the next cafe is, or wondering what time you will get to the next hostel, but apart from that you probably have around 6 hours of peace and quiet.  I remember telling one fellow pilgrim “I have just walked the last four miles and I didn't have a single thought going on in my head, that is just amazing”.  I felt at peace and stress-free.   New ideas would pop into my head for business ventures, but in all honesty, I just told myself “if they are good ideas then I will remember them when I get home” – and that is exactly what happened.

One of the best traits that you can have as a pilgrim is to be a good listener.  I learned this over time and it wasn't until Galacia (on my 4th Camino) that I finally decided to open my ears and listen to others stories and offer empathy.  I am embarrassed to say that I had previously dodged people who were carrying guilt, grief or wanted to talk through their problems.  For example, one guy I met had been a drug addict and his girlfriend had cheated on him, or another lady who was in that much grief about the loss of her mother that she had written the name of her mum on the soles of her feet and was walking off the pain.  I was not rude to these people, I just politely made excuses such as “I just need to nip to the loo” or “I need to push on to the next village” rather than spending more time with them.  How bad is that?

Finally, the penny dropped and I realised that I needed to listen to these stories.  People were not expecting advice from me, they just needed to be heard, and that is something I could now do.  My mind was calm, and the monkey mind was at rest.  I now had the capacity to be a good pilgrim and it was when I listened to the story of Christina that I realised that this is what I need to do in my normal life back home.  To listen more.

The story of Cristina

Along the Camino, we bumped into a happy smiley young girl named Cristina (19 yrs old) who was walking the Camino with her brother Santi, and her uncle.  One night, in Rabanal after watching the football match in the small pub, we sat together and she told me her story.  The following is an excerpt from her initial entry on her blog:-

The last time I was in Spain I was in a train accident with my family that took my mom’s life along with 79 others. My dad and I survived the wreck and my brother was there waiting for us to arrive after he had completed the Camino for the first time. July 24, 2013, was an inevitable tragedy that changed my family’s life and of course many other people’s lives.

This summer my brother, Santi, my uncle, Luisfe, and I are going to walk the same walk my brother did that summer. Going for the first time back to Spain, back to Santiago de Compostela, back to the site of my accident, back to the place my mom ended her journey on earth and started her journey in heaven. I really like that thought. At her funeral mass, a priest said that my mom was ending her pilgrimage to Spain only to begin a new one. Not saying I haven’t felt anger, grief, and all. It’s just pretty beautiful to look at it like that. Instead of focusing on the fact that this is a one in a million kind of way to die and all.

We sat for quite a long time just chatting.  I have never in my life met anyone who was as positive as she was.  She told me how she thought that the pilgrimage was going to be a sombre affair and that her blog would be full of thoughts and feelings as she processed the death of her mum, but it was completely different to what she was expecting. As she spoke, and I listened, she was vocalising what an amazing time that she was having. She told me that the people she had met were now life-long friends and rather than feeling sombre, she felt more alive than she had in the last few years since her mothers death.   You could see that she was surprised at her own words as she told me that the Camino had changed her life and it was certainly a magical place.

I am sure that she spoke to lots of people during her Camino, but as I walked away from that conversation I was thinking to myself that I need to do more of this listening stuff.  Not everyone wants sympathy or a shoulder to cry on, they sometimes simply need to vocalise something to start their own healing process.  Lending an ear made a difference that day and long may it continue.

There is an old phrase if you want to get on in business and sell more stuff – “be interested, not interesting”.  If you go to see a new client and you let that client talk about themselves then they associate you and your business as someone they can trust.  It is always easier to do business with someone you can trust.  Life is exactly the same.  If you want to get on in life then you need to listen more.  Someone once told me, God gave us two ears and one mouth, we should use them in that proportion!