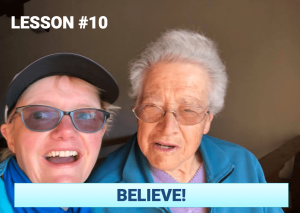 We stayed the night in a rather large hostel in Astorga.  I didn't sleep very well as the Korean guy in the bed opposite was sleep talking all night.  It wouldn't have been so bad if I could have understood anything that he was saying!  I remember thinking how amusing it was to start with but by 3am I was ready to smother his head with my pillow!

This is the Spanish lady from the little church who was 83 years old.

My blisters were still excruciatingly painful and I had spent all of last night airing my feet and walking to the kitchen barefoot.  A group of pilgrims had cooked an amazing meal, so overall it was a good day, but this morning as I placed my feet on the floor I found it hard to get motivated.  I hobbled to the bathroom feeling very grumpy.  I was annoyed with myself for not making the effort to see the wonders of Astorga after we arrived yesterday.  We had not ventured into the town to see the chocolate museum or even visited the Cathedral which was opposite the hostel.  For the first time on this trip I was feeling rather low, which is unlike me.

Anyway, by 8am we were all packed up, my feet were covered in Compeed and we headed out of the door into the glorious sunshine.  Each step was painful and I knew that today was going to be a slow one for me.  Rachel, Julie and Sue rushed ahead of me, so I just plugged in my earphones and took my time.  Perhaps some solitude (with Ed Sheeran) was what I needed. 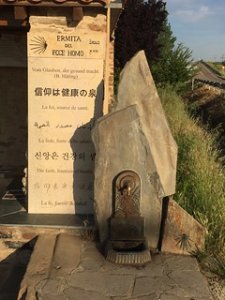 The Fountain of Health in Astorga

Before long I spotted a familiar rucksack outside a dinky church on the outskirts of Astorga.  It was Sue's bag.  Everyone else had trucked on by, but I used the opportunity to take a well earned rest.  Saying that, I had only walked a mile or so! I took off my bag and nodded at Sue who was in deep conversation with the little Spanish lady who was looking after the church and issuing stamps to pilgrims.  I took a few minutes and sat on a church pew looking up at Jesus on the cross in front of me.  I sat there for a while and saw more familiar faces come into the church, cross themselves, light a candle, murmur a few words and then vanish.

Eventually I stood up, pain searing through my body and headed outside into the small courtyard.  Sue was still talking to the Spanish lady and beckoned me over.  Sue explained that the lady was 83 years old and she had walked from Astorga to the church every day of her life since she was a child.  When she arrived, she would drink from the fountain of health and pointed in the direction of a water fountain.  Above the fountain was a plaque claiming “The Faith, Fountain of Health”.  The Spanish lady gave me a huge hug and Sue translated for me that she had never been ill or poorly in her life and she truly believed that the fountain was protecting her from illness.  Apparently, many people from the town would make the walk each day and they all live long and healthy lives.

She pointed at my feet and urged me to fill my water bottle from the fountain of health.  Like an obedient child, I filled my bottle with the water from this lovely little fountain and with a smile, I returned to the lady for my Camino Passport stamp and another hug.

Julie and many others had walked by this cute little church and the fountain of health, but I feel that I was called to stop.  I felt rejuvenated and although my feet were still painful I had a new spring in my step.  This was going to be a good day!

We often hear the phrase “fake it until you make it”, but if you don't believe in your heart that things will happen then they never will.  That Spanish lady was so adamant that the fountain was the cause of her perfect health that she wanted every pilgrim to take some water and experience good health.  She truly believed in what she was saying.  That day made me think about my future and made me question what was true in my heart?  What did I believe?  Did I want to be working in the world of marketing forever or was I just doing that job as I earned good money and life was comfortable?  I had an idea about setting up a walking club and perhaps guiding people along the Camino, but did I truly believe that I could do it as a full time job?  The answer was no, not yet, but by the end of this trip it was a different story! I just needed to believe that I could do it.