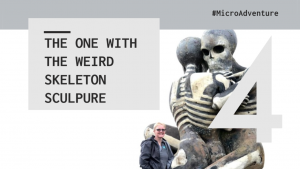 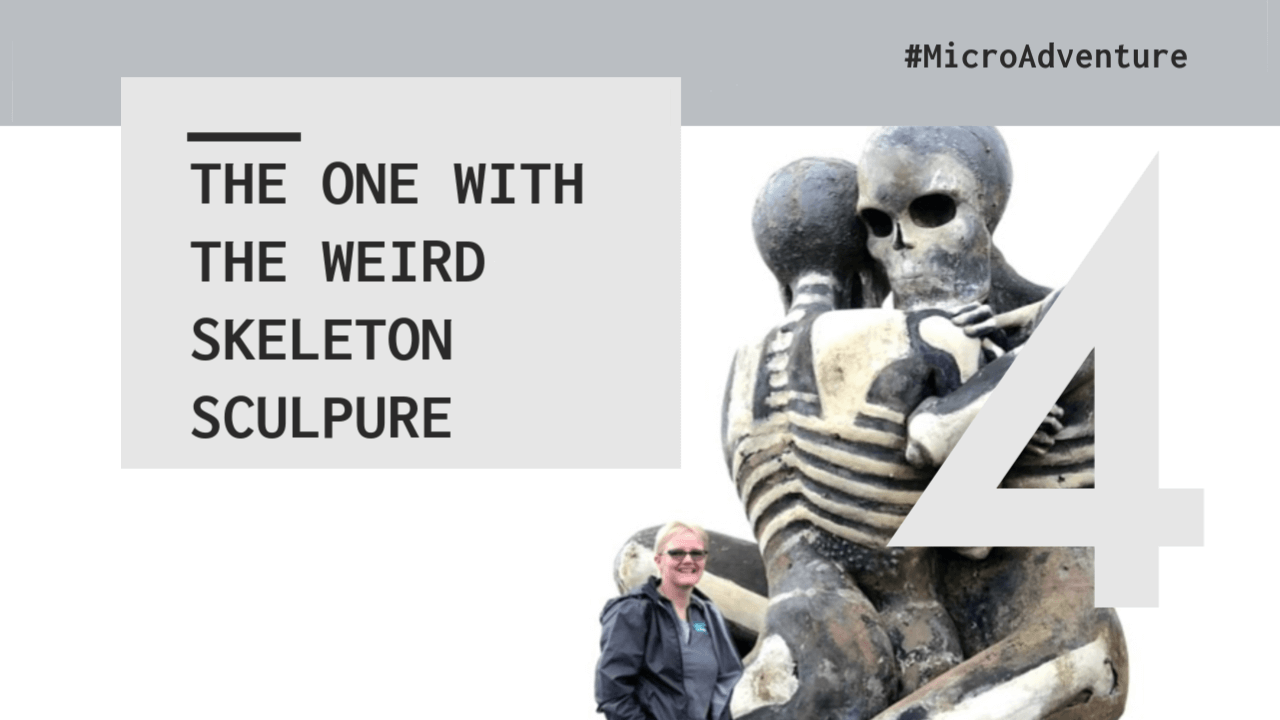 For a while now, I have tried to live my life with an element of spontaneity, just to make life a little bit more interesting.  One Wednesday morning in February I woke up knowing that I had zero appointments and I decided to take a sickie (can you do that if you own your own business?).  My daughter Rachel also had no college this day so over a slice of hot buttered toast I looked at her and said: "do you fancy a mum and daughter road trip?" "Where to?" she replied, "I have absolutely no idea, but we can put a pin in the map and see where it takes us".  "OK, I'm in!" she said.

We decided that the zoo was a bit boring and we didn't really want to go to a theme park, so unlike most mother and daughter road trips, we sat in the car and launched a website on my phone called Atlas Obscura.  Atlas Obscura catalogues unusual and obscure travel destinations all over the world and I was curious to see if there was anything weird and wonderful near our home town in Northamptonshire. 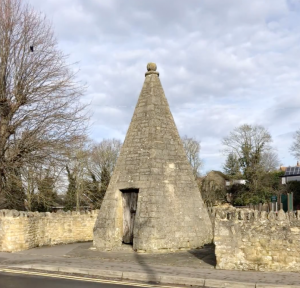 Rachel is currently at college on a two year Public Services Course as she has always wanted to go into the police.  The police is a bit of an obsession of hers.  Whenever we are on holiday in a different country she will often be seen taking photos of the local police cars and motorbikes as she finds it fascinating.  When I saw that we could visit a 15ft prison that was built in the 1800's I knew that would be our starting point for today's road trip.  I plugged the destination into Waze (great sat nav app by the way), and we were on our way!

We arrived in Wheatley and soon found this very strange looking pyramid prison with its six sides and a ball on the top.  Apparently, back in the day, there were over 10 pubs in the small village, but no police.

At one point, this dinky village held at least ten pubs, which resulted in an unsurprisingly large amount of public intoxication. However, with no courthouse of their own, constables would have to bring disorderly citizens to the small stone cell to hold them until they could be tried the next day in nearby Oxford. The small room was near eight feet tall with a six-foot square of floor space to accommodate each night’s guests. The door is made of thick wood with a sturdy iron lock and it even contained stocks for the truly unruly. The purposefully windowless, airless jail came to represent a general decline in the civil tenor of the village.

Today, the Wheatley lock-up remains in much the same state as when it held intoxicated villagers and is now a protected historical site. While the unbreakable door is left locked most of the year, the chamber is opened in the public once a year on May Day and anyone interested to see what it was like to sleep one off in the 1800s can be locked in the dark cell for five long minutes. Afterwards, they even receive a certificate to commemorate their brave approximation of petty crime.

Unfortunately, we could only take photos from the outside, but we may return in May for our 15 min prison sentence and certificate!

We grabbed a coffee and a hot sausage roll in a local cafe whilst planning our next observation! 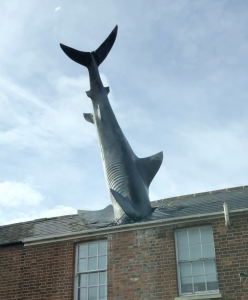 We sat in the coffee shop in Wheatley and launched the Atlas Obscura website.  To my delight, just 6 miles away was the famous Headington Shark.  "Fancy seeing a 26ft shark sticking out of a regular house Rachel?" With a smile and an enthusiastic nod, we had our next destination planned.

What is the Headington Shark?  According to Atlas Obscura, about four months after the incident at Chernobyl, on August 9, 1986, Oxford-resident Bill Heine had a twenty-six-foot shark sculpture erected on his roof. Using cranes, Heine and sculptor John Buckley mounted the shark, head first, onto the roof in the middle of the night. That morning (which was also the 41st anniversary of the dropping of the nuclear bomb “Fat Man” on Nagasaki), the headless shark began delighting curious onlookers; with the exception of town officials, that is.

Bill Heine, who still lives in the house today, says that the shark was assembled and properly placed to speak out against incidents such as Chernobyl and Nagasaki, as well as general government incompetence. According to a local Oxford resident “As I understand it, zoning laws in that part of the city prohibit, or prohibited, the installation of T.V. antennae above a certain height, but not the installation of artwork. Heine, wishing to install a T.V. antenna, found an ingenious solution to this problem by building the shark around the antenna. It is possible that the shark is also intended to speak out against nuclear armament, but that is not how Oxford residents see it.”

Rachel and I were parked in this residential street of terrace houses, looking up at a 26ft shark, poking out of the roof.  I looked at Rachel with a smile and said "What a weird way to spend a day!", and that day was just about to get even stranger! 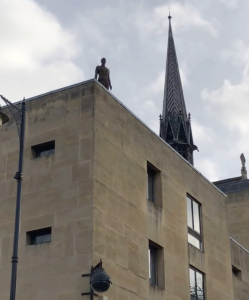 Our next destination was in the centre of Oxford.  Oxford is such a beautiful city, and it was brilliant to see so many people out and about on pushbikes!  We drove through the centre of the city taking in the sites from the warmth of my mini-clubman before parking up outside Oxford's Exeter College.  We were on the search for a hidden creepy nude man sculpture that was apparently in plain sight as it watches over the city.  We knew that this sculpture was erected on the roof of Blackwell’s Art and Poster Shop and we spotted it immediately.

This seven-foot-tall statue by Antony Gormley is one of a series of sculptures called “Another Time II,” based on moulds taken from his own body.  Antony is also the creator of the famous "Angel of the North" in Newcastle.  It was a bit creepy and I can imagine seeing this figure at night would be a bit weird.

Exeter’s College rector Frances Cairncross praised the statue upon installation, saying that the “wonderfully stark” sculpture would be a welcome contrast to the “florid figures” standing across the way at Trinity College. Gormley, too, was quite pleased with his bronze’s clever, unexpected location. “The casual passer-by will ask, ‘What is that naked iron bloke doing up there?,’” the artist said, “[a question] for which I hope there will never be a single satisfactory answer.”

Right, the photo was taken, and it was time for our next destination as time was ticking and the light was now fading. 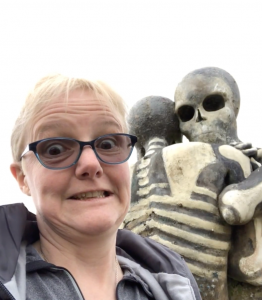 In an isolated field near a dilapidated barn stands this chilling portrayal of the plight of the Nuba peoples of Sudan.   Out of all of our observations today, this one was by far the weirdest.  The embracing skeletons were absolutely massive and not what I was expecting at all.  Apparently, the sculpture was created by the same guy who put the shark in the roof.  Wouldn't you love to have him as a guest at a dinner party that you were hosting?  It would be great to find out what was going on in that head of his!

Atlas Obscura claims that this haunting sculpture is made all the more powerful by its odd location. It’s backdropped by a half-collapsed barn, surrounded by the expanse of a remote field in the village of Checkendon in south Oxfordshire. There are no signs leading to the striking sculpture or plaques explaining its meaning.

The creator, John Buckley, lived in the region from 2000 to 2001 as a guest of the Nuba Rehabilitation, Relief and Development Organisation (N.R.R.D.O.). Thirty years of fighting has left the indigenous tribes living in the Nuba Mountains on the edge of survival, what some relief groups are calling an ethnic genocide. Buckley was struck by the resilience, despite their suffering, of the people he met and created this incredible work to call attention to their plight.

We left this scene and plugged "home" into Waze.  The drive back was beautiful as we navigated our way through quaint little villages with their thatched cottages.  We stopped to take some photos of the sun setting over the Chiltern Hills and before we knew it our day was over.

Sometimes, it is days like this that end up being the most fun and memorable.  It was certainly a strange day, but Rachel and I shared a few giggles and more importantly, we spent some quality time together.  The only money I spent was to fuel my car and to grab a few snacks.  The rest was spent singing loudly to Lucy Spraggon and having fun with my daughter.  That is what micro-adventures are all about.  Being spontaneous and living life to the full.  You don't always have to sleep in a tent in the middle of no-where to have a micro-adventure!