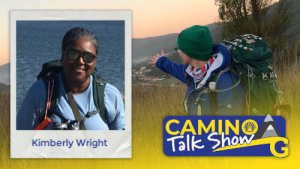 You can find Kimberly's story on https://kimscaminoadventures.wordpress.com/

If you are looking for an inspirational story of pure determination, bravery, heartache, pain and magical moments then this is the interview to listen too.  Camino Kim, as she is now known, who suffers from chronic arthritis and diabetes, opens up her heart to share her story, which starts with a near miss of hypothermia, in June, on the Pyrenees!

Below are the show notes / mini transcription of the interview. I would highly recommend listening to the audio though so that you can get a true feeling of Kimberly's journey.

HOW DID YOU FIRST HEAR ABOUT THE CAMINO?

I was in a staff meeting at work and a co-worker announced that she was going to be following another colleague who was walking the Camino.  I had no idea what that was but was intrigued.  That was in 2013.  Life circumstances prevented her closets friends from being able to commit to the journey.

Eventually, after lots of signs from other places (including her doctor and a support group), she decided that this was something she was going to do on her own.  Go girl!!

HAVE YOU TRAVELLED MUCH ON YOUR OWN BEFORE THIS TRIP?

Only on holiday and always with friends.  I had never been to Europe before, so telling my family was another challenge that I had to overcome.  I have two daughters and they were fully supportive of this adventure.

WHAT WAS IT ABOUT THE CAMINO THAT ATTRACTED YOU TO THIS TRAIL?

I tried not to over analyze.  I read somewhere that you need to ask a question and stick with that question throughout your trip if you want answers.  My question was “if I know what I need to do to be happy and healthy, why don’t I do things consistently”.

In my everyday life I am very much a business person, but on the Camino, I am not like that at all.

The Camino forced her into the present.  On the Camino you don’t have time to dwell on the past or worry about the future, you need to move on and stay present in the moment. You can't worry about yesterday.

TELL US THE STORY ABOUT THAT FIRST DAY ON THE PYRENEES.

Kimberly talks about her first experience in a Refugio, and how she crossed the Pyrenees in a storm.

I somehow missed the Camino sign and bumped into a farmer and his wife that didn’t speak English.  After some sign language communication, I realized that I now had to work my way back to where I had just come from.  I had lost all the time gained from leaving early that day.  Then the storm came!  The temperature dropped to 1 degree Celsius, and then it started to sleet.  It was on June 11th.  I stumbled upon a small shack/hut but it was packed with pilgrims who were trying to wait for the storm to pass.  There was a fire in the fire place but it was still very cold.  I put on all of my clothes and ventured out into the harsh weather.

It was not a regular storm, but one hell of a storm!  Visibility was so bad that I didn’t realize that I was in the middle of the forest.  I just kept going.

THEN THE MAGIC HAPPENED..

Kimberly continued her story and as she stopped for a breath she was so very tired.  She knew that this was a sign of hypothermia but she just couldn’t go on.  Then she heard a female voice say “don’t stop here”.  She looked around to see who said that and there was no-one there.  She kept going and eventually bumped in to another two pilgrims and they made it together to Roncesvalles.  (Wow!, what a story!).

25 people were rescued off the mountain that day.  Three people suffered from hypothermia.

DO YOU BELIEVE IN CAMINO ANGELS?

Oh, absolutely.   I met so many Camino Angels on this trip.   Kim tells the story of 11 strangers who were told to look out for her and to give her a big hug… which they did!

WHAT CAMINO ROUTES HAVE YOU WALKED AND WHEN?

I walked the French route from St Jean Pied De Port to Santiago.  I didn’t have time to walk to Finesterre, so I completed a day trip there.

YOU DOCUMENTED YOUR JOURNEY, IS THIS SOMETHING THAT YOU WOULD RECOMMEND?  HOW DID YOU MANAGE TO UPLOAD EVERYTHING ALONG THE WAY?

I used my phone to update my blog.  It was mainly to update friends and family on my adventure. I purchased a sim card in Spain.  I was constantly running out of data.  The wifi was often not strong enough to update the blog, so it was a bit sporadic.

WHAT IS IT ABOUT THE PEOPLE ON THE CAMINO THAT MAKES IT SO SPECIAL?

We all share the same experience.  We all wake up, grab a backpack, go on a walk, eat, deal with the weather.  It is something that we all go through together. There is mutual respect for people.

DID YOU USE WALKING POLES?

Oh yes.  I could sleep with my poles, that is how much I love them!

On the weekends, two months prior to the Camino, I would live out of my backpack.  All my needs would be in the backpack.

DO YOU REMEMBER YOUR LUXURY ITEM?

Kimberly has a patch that says “Young forever”, that was given to her by her daughters.  The patch represents a song by a Korean Group.  I am learning Korean and I met loads of Koreans on the Camino, but no-one noticed the patch.

I SAW THAT YOU HAD SOME PAINFUL OPEN WOUNDS ON YOUR BLOG.  WHAT CAUSED THESE AND HOW DID YOU COPE WITH THEM?  DID YOU ALSO SUFFER FROM BLISTERS?

I dealt with rain for the first two weeks. I was wet for this whole period, and I was putting on wet clothes.  When I was having dinner in Pamplona, I didn’t realize that my clothes were stuck to the back of my legs.  As I stood up I gave a yell and the skin ripped my from legs.  The funny thing was that I didn’t tell a soul, I just made out that I had aches and pains.  Later I was talking to a fellow pilgrim, Frank from Germany, who asked: “have you taken a picture of yourself crying yet for your blog?”. I replied, “Why would I do that?”.  He said, “If you are going to tell a story then you need to tell the whole story."

Kimberly talks about the walk down from Le Cruz De Ferro - which was a huge challenge.  She was stuck going down.  She had to trust, and she had to believe.  The story of Kimberly's friendship with a fellow Pilgrim called Haidie will certainly pull at your heartstrings.

DID YOU HAVE A CAMINO CRY?

Yes.  One guy approached me and said, “My friends and I do not think you will make it to Santiago”.  He further stated that “we laugh at your slow pace” then all of a sudden he began to cry.  I instinctively reached out and grabbed his hand (which was crazy as he had just insulted me).  He said, “I am so ashamed, the Camino is for everyone”.  I then had my Camino cry but I realized that I needed to be careful otherwise I will ruin my Camino experience.  I can not clam up because of what I had just heard.  This guy needed to learn not to judge others, and my lesson was to not take on board other people’s judgements.

Music or no music? - no music

Skip the Mesta or not? Do the Meseta

Guidebook or app?  both

WAS THE CAMINO EVERYTHING YOU THOUGHT IT WOULD BE?

Yes and more.  Even her colleagues at work now call her Camino Kim.  I no longer carry stress as a badge of honour.  I have changed a lot, I just let stuff go.

KIM SHARED A PASSAGE OF COURAGE WITH US.

Courage is not a lack of fear.  Courage is moving forward in spite of fear.

When you show up with courage, you’re making a statement that “yeah, I’m terrified.  I own that.  And I’m going to do it anyway.”

Here’s the thing:  when people act courageously, they sometimes get hurt.

That’s why there is no courage without vulnerability, and there is no vulnerability without courage.  The two attributes are inseparable.  And both of them together will lead you into a more authentic life.

When you move towards the type of life that demands courage and vulnerability, you journey into a space that calls to you from deep inside.  You journey into something that is greater than the sound of “should”.

So here’s my question:  what scares you?  What idea sounds bold and terrifying and exciting all at the same time?

And taking that first step, itself, is a cause for celebration.

And that is how I would summarize the Camino.

IS THAT HOW YOU NOW FEEL?  DO YOU FEEL LIKE THE TRUE YOU NOW THAT YOU ARE HOME?

I do.  What I realized is that there is the business Kim and there is a personal Kim and I kept the two very separate.  When I came back from my Camino trip I thought that I need to let the two merge together. So the people at work now see the fun side of me.  I was quite surprised that my Camino blog almost went viral around my job.  I wanted to keep it quiet, but no.  I think people were just trying to figure out who I was.  When I came back I was happy to be Camino Kim.

I am allowing myself to say yes!