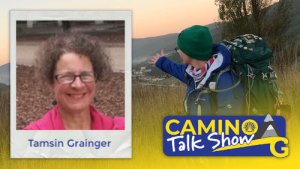 QUOTE: Walking itself is the intentional act closest to the unwilled rhythms of the body to breathing and the beating of the heart

This week I have a very special pilgrim with me. Tamsin Grainger is a true free spirit who loves to walk and discover new places.  She has a fantastic blog which you can find over at walkingwithoutadonkey.com.  Tamsin is a Shiatsu teacher and travels the world to sharing the shiatsu love, although her home is based in the beautiful city of Edinburgh.   Today we are going to explore why the Camino was such a special place for Tamsin and how it differs from other backpacking trips.

Where are you right now?  I am back home (Edinburgh).

How did you first hear about the Camino?  A really long time ago!  I had a friend who lived nearby and she started telling me that she had been to Spain and completed the Frances route in three sections.  The friend then published a book about her travels and I was very lucky to get a copy.  That was my first chance to hear about the Camino.  Then other people that I knew walked and interest grew from there.

What routes have you walked?

What is the history of the Via De La Plata?

It is also known as the Silver Way and is 1000km from Seville in Andalucia, and running northwards through the provinces of Extremadura and Castilla y Leon to Salamanca and Zamora.  Plata is Spanish for Silver.

How did you feel about the Compestella, as you did not get one for the Via De La Plata?

The first time it was great, but for me, it is very much about putting one foot in front of the other.

It is one of the attractions that you walk through so many regions of Spain on this route.   You start in the hot, hot, hot south in the city of Seville.  Listen to the way Tamsin describes this route.  It is fascinating.  She describes the mountains, the natural parks, the archaeological sites and you can hear her passion for the nature around her.

Do you blog as you go?

I have tried three different ways.  I had notes on my phone. Handwritten notes are a nightmare.  When I did a long stretch I wrote the blog each evening, but it was really difficult to keep up with it all.  Sometimes there is very little wifi.  It also highly unsociable, which I found challenging.

Going back, pre-Camino, had you done any backpacking before this trip?

Tamsin talks about Yoga and how this has really helped her with regards to being able to walk as far as she has.

Tamsin was really lucky.  She didn’t do any training and also walked with a pair of borrowed boots.  The key is to not do too many KM’s.  You don’t need to do the stages that are in the book, just start out slowly and see what happens.   If you force yourself to go faster and farther than you should then you will cause yourself an injury.

Tamsin explains about https://www.blablacar.co.uk/  which is a car-sharing system that was set up for people looking for companions to keep them awake on a long drive.

Did you have a reason for walking the Camino?

I was taking a sabbatical from my work. Some reasons I won’t go into, but other reasons were to do with probably mid-life, and children leaving home.

We talked a lot about seasons of life and transitions from one season to the other.  The Camino is a great facilitator of change.

Do you use walking poles?

Yes, but I have trouble with them at airports!   They say it takes a third of the wear and tear off your knees and hips.

What languages do you speak?

I stayed with people in Spain for one month before I started walking the Camino and this is the best way to learn a new language.  I walked with a French man, so ended up speaking French as well (I hadn’t spoken French since school days!).

What do you think to apps such as Google Translate?

I use Google Translate all the time although I probably shouldn’t as its apparently it is terrible.  I also spent lots of time on Duo-Lingo the application to learn a new language.

What is the infrastructure like on the Via De La Plata?

It was very similar to the Frances route.  I can only remember one time when a hostel was full.

There was a lot of flooding on the Via Plata which was quite an issue.

Did you bring anything that you didn’t need?  I sent home a swimming costume three times!

What was your luxury item?

A kindle.  I don’t really do luxury items.

It depends on the season that you are travelling.

Did you have a favourite section?

Yes - Tamsin told lots of stories about her favourite areas of the Camino.

Tamsin talked about a couple that was walking the whole Camino every weekend.

What guidebook did you use?

Important: Download the application called Camino Alert, which is a great app that notifies the local police if you activate it.

How did you find the Spanish Food?  Especially for a vegetarian?

Listen to the stories that will either make you cringe or laugh!

If you are travelling out of season then take your own cutlery and plate!

Tamsin explains how the invitations flood in and then she walks wherever she accepts an invitation.

Lessons learned on the Camino

There are more good people in this world than bad!