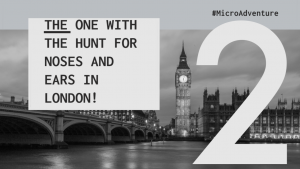 A micro adventure is all about doing something that you don’t normally do. Whether that be sleeping in a graveyard (on my list!) or taking the train to London with your mum to go nose spotting!

This weekend started with a WhatsApp message from the hotel that we had booked. “Hi, this is Jon, we look forward to seeing you at the hotel later today, check-in is from 3 pm. Bed linen is provided, but please remember to bring your own towels”.  I scratched my head thinking that Booking.com did not mention anything about own towels and perhaps I’ll also take my bed bug sheet! This is going to be an adventure!

I arrive at my mum's house at 1.30pm and we grab a taxi to the train station.

We navigate our way from Euston Train Station to Battersea Park Station where we hop into a black cab to our hotel. I won’t go into detail but let’s just say that our initial gut instincts were right about the hotel, so we made the sensible decision to swap hotels. 10 mins later were greeted by hot warm cookies at the reception of the DoubleTree Hilton around the corner in Hammersmith.  Result!

Over a glass of wine and a meal in the hotel restaurant, we made plans for our day of adventure for tomorrow!

After a hearty breakfast, we head out into the City via the underground matrix. You can’t help but tune in to different conversations when on the tube.I listen with interest to a fascinating discussion on pesticides! Oh.. we are here. Our first point of interest. Time to discover platform 9 and 3/4’s at Kings Cross Station.

So, there is nothing secret about platform 9 and 3/4. It was hugely commercialised and had the feeling of a theme park where you have your photo taken, then you are guided through the gift shop before selecting which print you would like.The queue was about 40 mins, but, we were here now so let’s do it! I got chatting to the guy behind me and he agreed to take our photo with my iPhone... result! It was good fun and interesting to listen to people from foreign countries getting excited about Harry Potter.Mum wore a burgundy scarf (Gryffindor), and I wore a blue one (Hufflepuff). 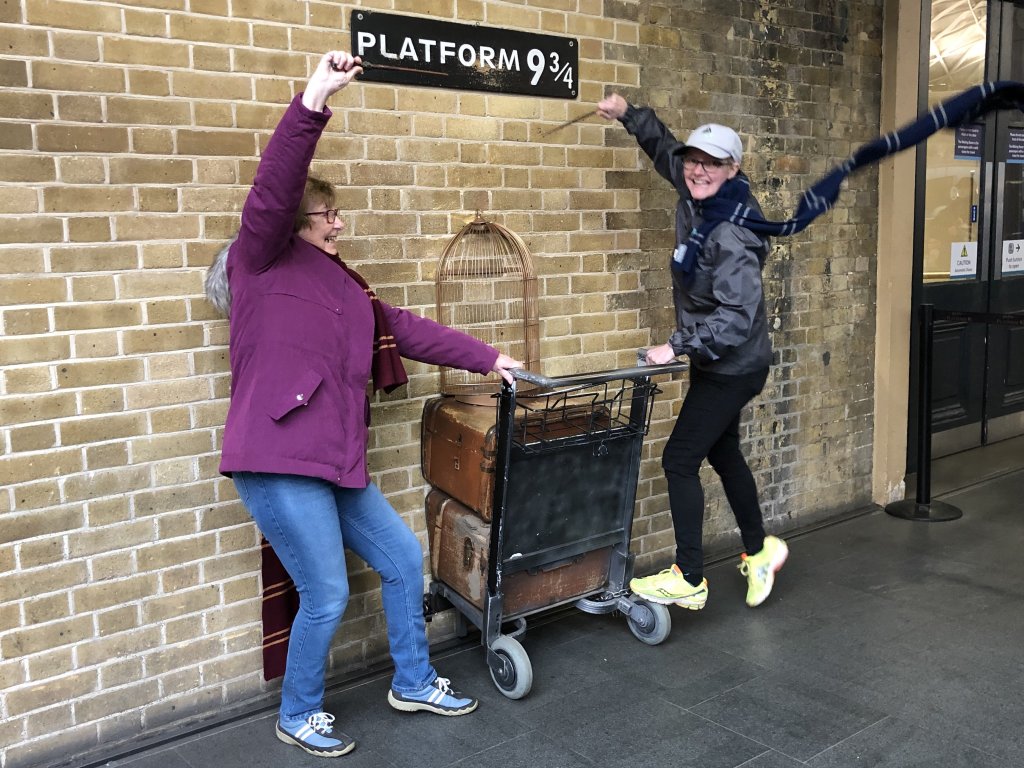 Quick pit stop to warm our frozen toes and now we are off to soho to look and find out what’s under our noses!

THE SEARCH FOR NOSES AND EARS!

After reading a blog about the hidden noses in London, we entered the first location into Google Maps. Endell Street, here we come!

In 1997 the artist Rick Buckley decided to stage a protest against the appearance of CCTV cameras across the streets of London, by creating a series of mini sculptures on the walls around Soho.   He created a plaster cast of his own nose, and then literally placed them directly underneath CCTV cameras on some quite famous structures.  He originally placed 35 "noses" but now there are just seven left.

They are a bit weird, and also very small, so you need a good eye to spot them.  Be warned, most local people have no idea what you are talking about when you mention Soho Noses!

We walked up and down Endell Street and couldn’t spot a nose anywhere! I decided to pop into an art gallery and ask. The door gave a little “tringggg” and a guy with a ginger man bun and neatly pleated goaty beard appeared from the basement. “Hi," I said, "I know this sounds a bit crazy, but I’m looking for a nose that is on Endell Street, do you know where it is?”

“You are the second person this month to ask me that and I have no idea, what does it look like?”. Ok, so how do you describe a nose? I did a quick Google image search for Endell Street, London nose and an image popped up. “There you go”. He was intrigued, but he still had no idea. Oh well, we will give it 5 more mins. At this point, both mum and I were thinking that the nose hunt was someone’s idea of a practical joke.We think we found a nose (see photo) but we are not 100% sure! I could just be a lump of brick! 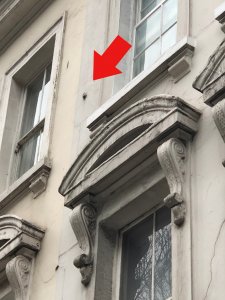 We think this was the nose, but we were not really sure? What do you think?

We had enough of nose hunting so we decided to try some ears! According to a blog I had read, there were two ears, just outside Covent Garden on Floral Street.Once again, we found ourselves walking along a London back street, getting neck ache from looking up and down. We decided that we needed a strategy if we were going to nail this hunt!

A Covent Garden security guard was looking a bit bored so I took a deep breath and asked “excuse me, do you know where the Floral Street ears are?”, “sure", he replied, "follow me!”. With a new found spring in our step, we eagerly followed. Two mins later we were looking at an ear that was stuck to the wall. I had a big grin on my face and we now knew that this was not a hoax! There really are ears and noses in London! I mentioned to the security man that there are two ears in Floral Street, but he said that he only knew of one. We went on the hunt for the second ear and within a few mins, we found it! This was more exciting than geocaching! 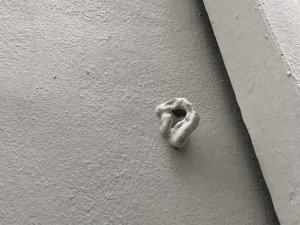 Our first ear on Floral Street! (Thank you to the security guard) 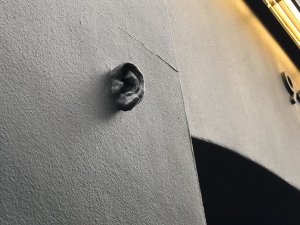 We then navigated our way through Trafalgar Square where some type of women's protest/demonstration was going on and there was police everywhere.

The next nose was quite a big one and we spotted it on Admiralty Arch. I had to nip across the road to grab the photo with people wondering what on earth I was doing! We were on a roll now! 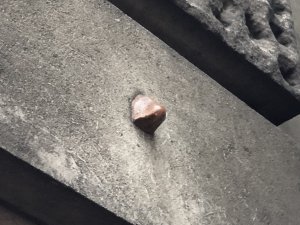 Admiralty Arch Nose. Watch out as it's in a tricky place!

Mum spotted this one! As we were walking up Great Windmill Street (not far from Leicester Square, she shouts “nose” and points to a blob on the wall near a little dark passage. She was absolutely right and that was our third nose bagged. 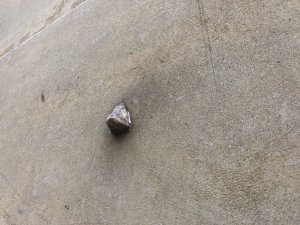 The none on Great Windmill Street.

I don't need to say much about the location of this one as it's a pretty large and obvious hooter! We spotted in easily.

Meard Street Nose - what a hooter!

This is a tricky one to hunt down as it blends in well with its surroundings (or so the blog says), but we never found it.

Apparently, you need to concentrate your search on the right side of Bateman Street beyond the Dog and Duck pub, which, incidentally, was a favourite watering hole of George Orwell, how's that for irony?

We gave up searching for noses as the weather was turning and our bodies were screaming out for coffee. We nipped into a very cute chocolate place where you enjoyed an “afternoon tea, type of experience”. It was refreshing to see the “no cash, card only” sign. I wonder how long it will be before everyone does that? After drinking coffee and having a wee in the cupboard (another strange story!), we ventured into the cold again. This time we were heading for another Harry Potter attraction... Diagon Alley!

We took the tube from Leicester Square (isn't the contactless system great?) to Monument and ended up walking by the Sky Garden.  We knew it was free, so queued up, until an official looking lady worked her way down the queue asking to see people's tickets.  Yep, apparently it is free, but you still need to book.  Oh well, we will leave that for another day.

Following Google Maps to Leadenhall Market, I was keen to explore Diagon Alley.   We were disappointed to see that the market was closed, however, we could hear a deep cockney accent addressing a small group of people.  When he mentioned the words "Robbie Coltrane and Hagrid" we knew we were in the right spot.  We briefly tailgated the guided tour whilst listening to a few Harry Potter stories, as well as noting Diagon Alley and the shop where Harry purchased his want.  Feeling guilty for the free tour, we snapped a few photos and then quietly snuck away!

Our intention was to nip to 221 Baker Street in the way back to the hotel but it was dark, cold and we needed to refuel. A glass of wine was calling so we hopped back on the tube and headed back to the hotel.

If you ever have the opportunity to go ear and nose hunting in London then I would highly recommend it.  London is riddled with quirky stories and small boutique shops.  We popped into little Buddha shops and chocolate coffee houses, but above all, it was just great having a micro adventure with my mum.