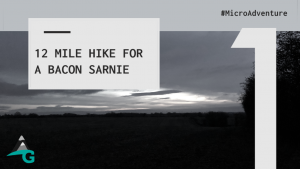 It’s very quiet as I slowly close my front door at 6.10am with my shoe lights beaming! Duston, here I come!

As part of my 2019 goals, I have decided to take my adventures to the next level.  After reading Alastair Humphrey's book, I realised that do not have to climb Everest or take weeks away from home to walk a long distance trail to experience an adventure.  There are many things that you can do that are right on your doorstep.  So, with a bit of imagination and gumption, I intend to embark on as many MicroAdventures as possible during 2019.  As a minimum, I would like to achieve at least one adventure a month (hence the progress bar above).  Wish me luck!

My very first micro adventure was actually a last minute decision.  I was planning to walk the local parkrun (3.2 miles) and then drive over to my mums for our traditional Saturday morning bacon butty, coffee and a catch-up.  I have no idea why I thought that walking to my mums was a good idea, but hey, that's what happened.  I sent my mum a quick text to say "expect me a little bit later than normal tomorrow as I have decided to walk to your house rather than drive, I hope that's ok?".   My mum thought I was a tad crazy, so did my husband, but hey ho, let's start as I mean to go on!

Walking, Alone in the Dark Can Be a Bit Scary 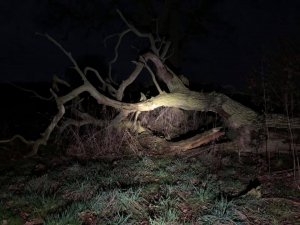 Walking through the housing estate was familiar and comforting.  I crossed Northampton Road and walked through a little stone archway into the dark woods beyond.  It felt like I was venturing into another world, and an element of doubt crept into my mind. What on earth are you doing Julia?  This is friggin scary, but you can't give up yet, you have walked less than a mile!

There was no wind, the moon 🌓 is bright and the sweet sound of birdsong kept me company as I traipsed through the woods, over stiles and through muddy fields.

The beam of my torchlight or perhaps it was the sound of me squelching through the mud disturbed pheasants who were resting peacefully in the bushes. They noisily made their escape and scared the beJesus out of me!

I struggled with the gate at the end of my 3rd long field so clamber over the top of it instead.  I jump down, lose my balance and nearly end up in a ditch that I just hadn't seen.  It was then that I realised that I needed to concentrate if I was going to make this adventure unscathed.  I remove my airpods, and turn my torch to a brighter setting, and decide not to listen to my music until the sun comes up.

As I walk across the dark fields I hear the distant sound of moo-OMG!!! Ok, I’m brave, I can do this. Shit, I forgot my walking poles! My heart races, my step quickens. I really don’t like 🐄

I exit a field and enjoy the comfort of a tarmac road for the next half a mile.  The glow of lights from the small village of Shutlanger was getting closer and I feel a sense of achievement.  I can do this!  Just put one foot in front of the other.  I take a left up Twitch Hill - isn’t that a funny name? No? Just me then? 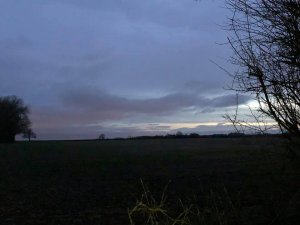 The sunrise (sort of)

The road continues for a short while and then veers off to the right.  I instantly recognise this path as it is part of our Adventure Geek Stoke Bruerne Walk.  The views across the fields are amazing and the dark sky is now turning into a dark grey.  I am in my own little world as I traipse over fields, listening to birds and watching out for foxes and deer.  I then realise that it’s light. When did the sun come up? Bugger, I missed it!

As I walk along the canal I consider getting Sparkle (my drone) out to play. Wouldn’t it be a great shot as he swoops over the canal? I decide against it as I’m not that brave... yet! A few more practice sessions first I think!

As I navigate my way through Blisworth I’m tempted to stop for a cuppa at Ray and Jo’s. I’ll never get to Duston at this rate, so I just wave as I walk by. 👋 👋

The most beautiful sight ever - a heron flying.

I was walking along the Grand Union Canal and navigating the locks.  This is such a stunning area and I have never walked this far along the canal before.  I turned the corner to spot a heron standing on the other side of the canal.  If you have seen the video then you will watch it take flight, what an amazing sight, and certainly one for the memory bank.  I apologise now for the narrative that went with the video - it was my heron-whisperer skills that made it fly! 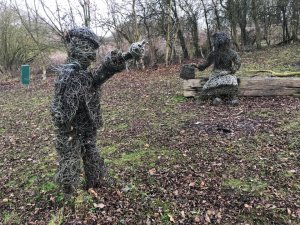 Sculptures spotted along the canal.

Not long after the heron, the towpath along the locks were wide and I decided to try the drone.  I checked, and there was no-one around, so I  get Sparkle of out his case.  I still need to practice a lot with this gadget, but I knew how the tracking worked so , I gave it a go.  The drone followed me down the towpath and it worked really well.  It's a shame that I completely forgot to press record, and then the battery died!  I had another battery, but the path was now getting thinner and I didn't want my drone ending up in the canal, so I tucked him safely back into his case.

Within 5 minutes of packing up the drone, a police helicopter appeared above me.  As I walked, it circled directly above me for what seemed like 15 mins or so.  It was probably only a few mins but I thought I must be in trouble. Was I flying the drone in an illegal area?   Am I in trouble?

As I reached Northampton and saw the familiar signs of Sixfields and Upton Park, I sent my mum a little message via the app called Alltrails.  My mum has an Android Phone, so she was unable to track me via "find friends", but the Alltrails app has a function called "lifeline".  Its a feature that keeps your friends and loved ones informed while you are out on the trail.  My mum could now see my progress in real time and knew when to get the kettle on!

I finally arrive in Duston and as I turn into my mums front drive I’m greeted by a huge smile, a hug, hot coffee and a bacon sarnie. My mum rocks and so do #MicroAdventures 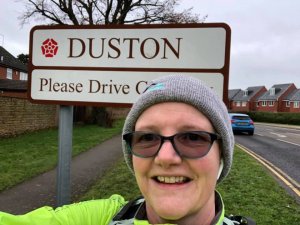 I made it to Duston!