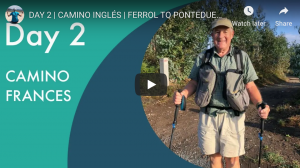 FERROL IS RIDDLED WITH DRUNKS

I Left at 6.18am after a hot coffee in my room (love my jet boil).  Ferrol is a big city and the place is riddled with drunks who have not yet made it home! – I am walking in the dark, heading for the harbour with my shoe lights on. They are ace! Although I’m getting some weird looks from the locals!

I eventually found my way to the start and took a picture of the first milestone. 112km to go until Santiago.  In this area, some of the waymarks have QR Codes on them giving details about the history of the area. What a great idea!.  As I walk out of the city I pass various forms of naval bases. Submarines and Naval shops are built here (or so I’m told).  I reach Piligono Gandara by 8.40am having walked nearly 5 miles and the glow of the Golden Arches is too much to resist. Coffee and a sausage and egg McMuffin it is!

I’m pleased to report that this Camino is actually quite busy even though all the guidebooks and forums say it’s one of the quietest routes. I spent 2 hours walking with Alan from Oz. He is 76 and this was his 7th Camino. He finished the French Way a few days ago and has some time to kill before flying home. He walked slowly so I left him at Xubia and said I’ll catch up with him along the way. Little did I know that later he would be feeling rather poorly!

As I type it’s now 12 noon and I’m 11 miles in. I’ve got about 18 miles to do today so I’m making good time. It’s Sunday so everything is closed. I did find a wonderful German bakery that supplied me with a delicious apple cake. I’m sitting on a wall watching the world go by and eating cake. Life is good.

My next stop was in Fene where I treated myself to a vino blanco. It is here that I met my first part of my Camino Family..Susie (Germany) and Alberto (Italy). They are both in my book. Alberto has an Alice band and two mobile phones. Susanne has some powder for her face (and a pair of jeans!) they speak excellent English and they are both lawyers. We had a good giggle and bonded well.

76 YEAR OLD ALAN WAS NOT WELL

Shortly after my vino break, we bumped into Alan (76 yr old Ozzy guy). I thought he was miles behind but he said he had not stopped all day. He had also not eaten all day and was feeling unwell (giddy). We clubbed together and fed him muesli bars, grapes etc and he was going to get a taxi at the next stop. It just goes to show that even experienced people like Alan make rookie mistakes. (I’m glad I had that MacDonalds!).

I eventually reached Pontedueme at 3.50pm and waited with others for the tourist information office to open at 4pm. The nearest campsite is another 5km away and there is nowhere to erect my tent (and I’m not keen on pitching it at the local park). I pay my €5 for a bunk bed and a cold shower. The good news is that Alberto and Susanne are also staying here. It’s a cute little place (see video).  Susie said “where’s Alan?” And all I could think of was the meerkat advert where it keeps going “Alan, Alan, Alan”…

I keep doing the meerkat impression every time someone said his name. Then we found him! He was filling up a bag from the pick and mix! Lol.

We’ve had such a great evening! I’ve learned a few Italian swear words, found out why the German flag is black, red and gold and drank some green grass liquor stuff that I couldn’t finish!.

My shin splints are killing me and I think I may give up on the camping if I can’t find anywhere tomorrow.