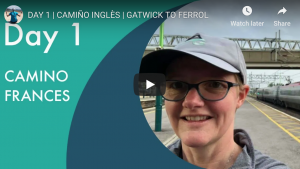 The day of Spanish people singing the Proclaimers, no campsites and a lollipop!

GATWICK FUN… I open my eyes gradually and glance at my watch. It’s 2.56am and I need to get out of this very comfortable Premier Inn bed in four mins. 3am, and I hit the snooze button!

I had already cling filmed Nelly (my pack) last night so I could afford an extra nine mins of snooze time. 3.09am (why is a snooze button 9 mins?) I haul myself out of bed, make an instant coffee with that awful long life milk and take a long hot shower to wake me up. My nerves from yesterday have subsided and been replaced with excitement. I’m really doing this! In just a few hours time I will be on my way to Santiago to start my wild camping Camino trip.

4.10am – Still in zombie land, I order the full breakfast at the cafe in the departure lounge at Gatwick Airport. I hadn’t realised that it was a Mexican restaurant. Everything was covered in paprika and the sausages tasted… well, not like sausages! The best thing about airports is the people watching!

The British beer drinking lads at the Champagne bar had my full attention for a good few mins. Actually, it was the very posh lady with a matching outfit/shoes/handbag sitting opposite them that caused me more amusement. She was not impressed at all! “Champagne Bars should not sell beer” I overheard her tell her husband (I assumed it was her hubby, but it could well be her bit on the side!”). It was 5.30am and the British lads, wearing baseball caps, shorts and covered in tattoos guys were totally hammered!

I take the shuttle bus to the plane which took 15 mins to reach the aircraft! At one point I did consider the fact that our bus had been kidnapped by terrorists and they were driving the shuttle to a secret hide-out. But no, it was just a very long way to the SleasyJet aircraft. On the plane, I indulged in watching The Way, with Martin Sheen. Gotta love Amazon Prime!

As I landed at Santiago airport there was an air of familiarity. I felt confident as I watched virgin pilgrims haul on their heavy rucksacks. I knew that feeling of the unknown and I was a little envious of the journey they were about to embark on. I spoke with three pilgrims who were all bound for Sarria to walk the last 100km. I wonder how many of the other pilgrims at the airport were heading to Ferrol? Time will tell. 12.30pm – I’m hiding in a cafe (known to some as the 14hr cafe) out of the rain. I’ve ordered my first of many cafe con Leche and churros. The lady shook her head and pointed to the table next door to say they had the last of the churros. Not to worry, I said. Then she gave me some almond cake free of charge. I love Spain!

My bus to Ferrol is not until 2pm so I’m charging my phone at the Estacion (Bus station) and listening to random music being played over the tannoy. Proclaimers (500 miles), Never Ending Story and Simply The Best all put a smile on my face! The Spanish older couple next to me are singing away to Culture Clubs “do you really want to hurt me”. That’s more entertaining than watching Netflix on my phone!

NO ROOM AT THE INN…

I reach Ferrol at 3pm but the tourist information office does not open until 4 pm. The town is large but it’s like a ghost town at this time of day. I’d forgotten that Spain sleeps between 2-5pm! I chat with Rachel via text and wait for the tourist information office to open. The lady is super helpful and I purchase my Camino passport and get my first stamp. My next question takes her by surprise “where can I camp tonight?”. Her reply “in a tent?” She tells me that the nearest campsite is 5 miles away and she would advise staying in a pension tonight. There are no municipals in Ferrol,. I try two hostels which were both full and I secured the last room of the 3rd hostel. A private room with en-suite and a free lollipop it is. Camping will wait for tomorrow.

Early night for me.