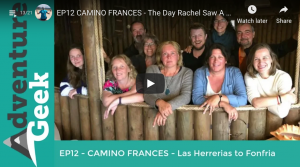 The day Rachel saw a snake!

A Thunderstorm is Brewing!

We reluctantly left the Paradise Hotel in the dark at around 6.15am knowing that today would be challenging as we had a mountain to climb.  As we took our first steps onto the road to head into the centre of the village and catch up with Julie and Sue for breakfast we heard the sound of thunder and then saw the sky light up with lightning.  It was rather scary thinking that we would soon be walking in a thunderstorm!

We met with Julie and Sue and had a leisurely breakfast of toast, jam and of course cafe con leche!  Sue was telling us how her single room in the attic was beautiful, but it was stifling hot so she did not get much sleep.

The climb starts almost immediately as we twist and turn on an uphill journey through the forest towards La Faba (900m) which was our first coffee stop of the day.  The 3 miles to La Faba felt like six as it was all uphill but we were rewarded by a charming little cafe run by creative folk who had a gorgeous puppy that took a shine to Rachel.  Not only did they sell refreshments, but they also sold many homemade trinkets and charms.  We stayed here for a bit longer than planned.

Our next stop was La Laguna (1200m) and we were officially in Galacia territory!   In all honesty, the climb so far was not as tough as I was expecting but that was probably due to the weather. We walked in a foggy cloud for a good part of the day which was actually quite pleasant (better than the sweltering sun!).

We lost Julie at O Cebrerio 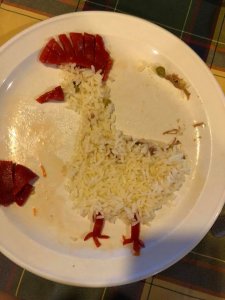 Rachel made a chicken out of her dinner.

We lost Julie at O Cebrerio (1330m) as she stopped for a coffee and we carried on.  I regret not stopping here for a coffee, but the mist was coming down and Rachel was not feeling too good, so we just kept our heads down and carried on.  If you do get a chance to spend some time in O Cebreiro then please don't fly by it as we did.  There is certainly a charm about this place and it has some fabulous shops to explore.

Rachel and I walked another 5.6 miles before eventually finding a cafe (Alto do Poio) that was selling food – we were both starving!  We ended up buying two dishes as the first pie thing was rather gross and then the second dish of pasta was cold!  I hope that the food tonight is better! (and it was).   Other people were stopping here tonight, but I am rather pleased that we decided to carry on to the next place.  As we were sitting outside watching the world go by a familiar face appeared from a Spanish car.  Susanna had decided that she would hitchhike the last 5 miles and managed to get a lift from a total stranger!  That was one brave lady!

A group of us continued on towards Fonfria, which in my opinion was one of the best hostels we have stayed at to date.  The evening meal was fantastic (Rachel made a chicken out of the rice dish) and the place was very clean.  There was even a foot massager and little heaters to dry your shoes (see video).

The beds are spotless, the showers are hot and modern and the cosy common area with large comfy sofas was the perfect place to watch the big game!

Highlights today were mainly due to animals!

🦋 Rachel saw a huge snake 🐍- it slithered across the path right in front of her!
🦋 I found a rather large spider on my walking pole!
🦋 We rescued a baby mole which had fallen out of the hole! (See video)
🦋 Rachel is in love with every dog that we cross. She spent lots of time playing with a very cute puppy and then in Alto De Polio she made friends with a dog that was nearly the same size as her! (See video)

Lots of new Camino friends today. My book is coming along nicely. 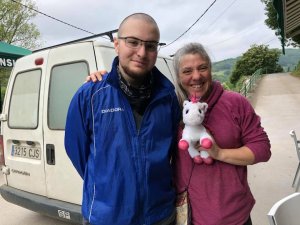 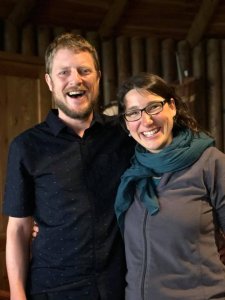 Delia and Reto from Switzerland. They had many luxury items as they pulled a Hikers Trolley full of gear. 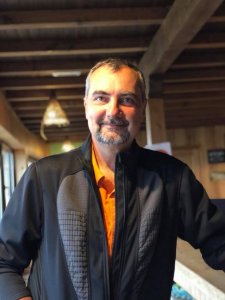 Luca from Italy (who became a Camino brother). Luca's luxury item was pepper spray that he didn't use.