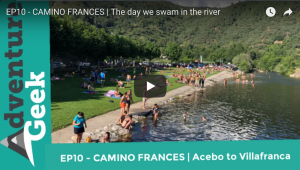 The day we swam in the river

It's 6.30am as I write in my journal and I have been awake for a while.  I even took a long hot shower in the very posh shower block.  This place is more like a five-star hotel than a hostel and we are all making the most of it.  Our intention is to have a coffee and then grab a taxi to Ponferrada without anyone witnessing that we are cheating! (Little did I know that our plans would soon be changing).

Julie and her “inner child” 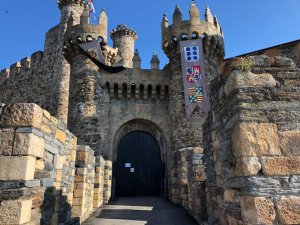 The Castle in Ponferrada closes on a Monday

This morning we had a fantastic breakfast at the posh hotel with the Spa/Pool. I was chatting to Peter from Germany, who we had met last night and I asked him if I could take his photo for my book. I printed it out then asked him the question “What is the special item that you carry with you on the Camino? Your luxury item?”  His reply made me burst into tears at the breakfast table (what is happening to me?  I never cry!). He said “I left my special item at the Cruz De Ferro yesterday” he then showed me a picture of his late wife (in the casket) which he had pinned to the iron cross.  I went outside to take a moment and get some fresh air. Peter followed me out and gave me a hug. He then lit up a cigarette and continued with the story. He said he has cancer in his neck which is terminal. He has not smoked for 15 years and now he says “fuck it”. He spent too many years working and not really living. He told me that you need to embrace life and take pleasure in the small things. Look at life with your eyes wide open.

We bonded with Peter even more as he and Julie stole sweets from the reception desk.  I was so embarrassed as they kept appearing with handfuls of sweets and were acting like little school children – Julie has an inner child in her that comes to the surface at least once a day and it can be rather contagious!

All four of us took a taxi to Ponferrada and the cab driver was hilarious, although I am not sure that Rachel would agree.  He was whizzing around the mountain roads without appearing to take note of the white lines in the centre of the road.  When Rachel asked him to slow down he told us that he has lived here all his life and knows these roads like the back of his hand.  Julie had a full on conversation with him about all sorts of things via Google Translate.  What did we do before this fantastic bit of software!  The driver (Loui?) stopped in Molinseca and gave us a history lesson.  A small part of me regretted not continuing our walk yesterday as Milinseca was where most of our friends were stopping and they had an awesome night.  Then I remembered the Spa, the showers, the beds and the food of our last hotel and the regret didn't last long! Loui then dropped us off at Ponferrada Castle which is an amazing site from the outside.  When we got to the front gates of the castle and there was a notice to say that it was closed on a Monday.  A German voice behind said “Shit” very loudly – that was Peter!

We decided to have a full rest day – why not?

We were waiting for Sue outside a cafe and got talking to another fellow pilgrim (who will remain nameless).  Sue appeared, full of the joy of spring as she tumbled out of a taxi.  The “said pilgrim” shook his head and verbally gave his opinion about “not being a true pilgrim if you have not walked the whole route… blah blah blah”.  We didn't agree or disagree, neither did we tell him that we had also just grabbed a taxi and were about to get a bus to Villafranca – it will be our little secret!

As this is our rest day we have taken a bus to Villafranca (me, Rachel, Sue & Julie). We have a hard day tomorrow with a steep climb. I’m not feeling guilty about taking the bus. My body needs to rest, our blisters need time to heal and I know we have done the right thing.

Ponferrada is quite a big town and we had to walk quite a way to find the bus station – this was a little adventure all on its own!  Julie made us chuckle (that inner child made an appearance) as she decided to join in with a protest march for equal pay.  (see video).

An afternoon by the river

We caught the bus and arrived in Villafranca at around 1 pm.  We checked into a fantastic HUGE albergue which was part of a church in the centre of town (St Nicholas).  No bunk beds – just five beds in one room.  I purchased some new trekking poles for Julie to replace the ones that I broke on the first day and the guilt finally subsided.  Julie will no longer be walking with one stick bigger than the other!  Rachel enjoyed a long soak in the bath (although we did worry when we heard a loud noise coming from the bathroom as she slipped in the bath!).  We had a rather lengthy discussion about the correct way to sit on the bidet, and then headed down to the rive 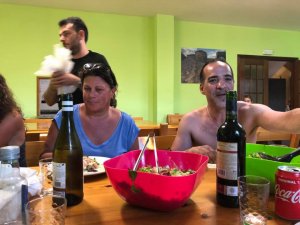 Snapshot of our evening meal with Armando

Villafranca is a very quaint town with fabulous churches, lots of cafes, shops and it’s a great place to live life in the slow lane. After a very long lunch, we spent the whole afternoon by the river. The water was freezing but it was so rejuvenating.  Around 6.30pm it was still in the 30’s and more pilgrims joined us. If there was any stress left in my body it was evaporated today.

At 7.30pm we finally said goodbye to the river and went on the search of wine and nibbles as Armando and friends were cooking a big meal for lots of pilgrims and we had been invited.  We walked (actually, I hobbled) to another Albergue on the other side of town and by 8.30pm we were devouring wine and a pasta dish to die for.  Italians certainly know how to cook! This is what the Camino is all about.

Today has been one of my favourite days.

My blisters are feeling much better and I am ready for the challenge tomorrow – 11 miles of uphill!

PILGRIMS ENTERED INTO MY BOOK TODAY 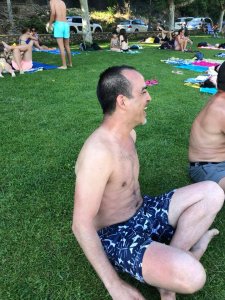 Armando from Italy who cooked us a fabulous dinner 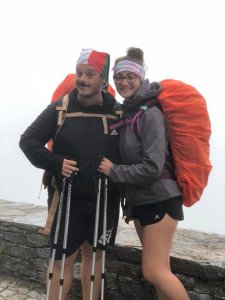 Simon and Valerie – his luxury item was an extension power port with nine outlets that would not work in Spain! 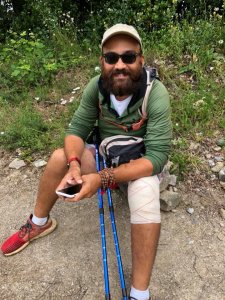