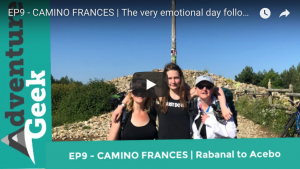 The One Where We Let Stuff Go… Followed By Pure Pleasure!

Just 10 miles today, but talk about being emotionally draining! 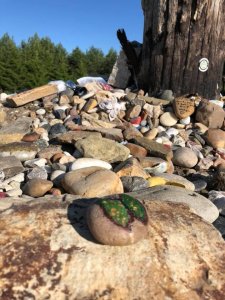 The green butterfly stone was given to me by my mum just before we left. I laid it at the cross and felt quite emotional as it symbolises that it is time to let go.

It was a day of ups and downs, both physically and emotionally as we reached the highest point on the Camino – Le Cruz De Ferro.  I'll explain what this place symbolises later in the blog.

It's 5.30am and I'm sitting in the common room of the hostel in Rabanal, all curled up in front of the wood burning writing my journal.  My legs are curled underneath me and I am in heaven as I am gently swaying back and forth in this lovely old rocking chair.  Nelly (my pack) is all packed and ready to go, I am just waiting for Rachel and friends to join me.  By 6.15am, everyone is downstairs and there is a stillness in the air as we all know that today is going to be full of wonder.

We started the day with Yorkshire Tea and hot buttered toast.  Rachel and I left the Albergue and said our goodbyes to the hosts (with a selfie!) around 6.45am, this was our earliest start yet!  We met Julie & Sue at the first cafe.  There was an energy in the air that I can't explain.  Was it excitement about what lay ahead, or was it nerves?  This cafe was buzzing!  Julie was already making friends and introduced me to a guy called Steve (although I later found out his name was Damien!). It was also the first time that we met Santi who was a rather intense character that everyone seemed to know.

The scenery today was incredible. The sun poked over the mountain tops and we had to keep stopping to absorb it all. 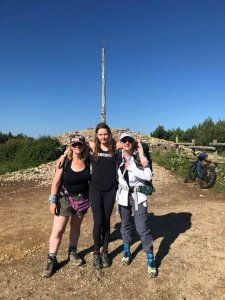 Julie, Rachel and I at Le Cru De Fero

Not long after our first coffee break Rachel and I turned the corner to see the Cruz De Ferro before us. This is a very sacred and prolific part of the Camino and most pilgrims carry a stone with them from home to leave at the iron cross. Initially, I was disappointed with the view. I was expecting a “wow” moment, but it looked like a telegraph pole with a small iron cross on it and a mound of stones beneath. It was next to the road and was not dissimilar to other monuments along the route. It was nothing special.

I put my pack down and grabbed the stone that my mum had painted for me and headed up the mound. That’s when it hit me. Just like a bolt of lightning. It’s really hard to explain but the emotion you feel when you see all the stones is indescribable. It was as if I have walked through some type of vortex and into another land as I climbed the large mound of rocks and stones that people had left. Tears were streaming down my cheek so I took a walk over to the nearby church to catch my breath. Rachel had a very similar experience and joined me shortly afterwards.  We both sat quietly with our arms around each other for quite a while.

A young girl who was walking with her brother and uncle lost her mum in a train crash a few years back in Santiago. As Rachel and I sat at the church the family approached the Cross. Watching them hug each other, kiss their stones and say prayers was heart-wrenching. It certainly made me appreciate my family.  We stayed in that spot for quite a while as we witnessed pilgrims approach the cross and lay their various trinkets and stones.  Many of these were people that we had met along the way.  There was no need for words as everyone understood the significance of the moment.  If you are not keen on hugging people then move on quickly from this area as hugs are dished out in their droves!

A picnic in the mountains

The next few miles were rather sombre. The natural surroundings and the beauty of lush green valleys and beautiful wildflowers full of colour brought us back to life.  We stopped briefly at a shack that was playing religious music, but it smelt like my fathers' house (not nice!), so we moved on quickly.

Rachel and I enjoyed a picnic on the mountain overlooking the small villages below.  Pilgrims walked by and acknowledged us with a “Buen Camino”, then Santi came along and just sat down in front of us.  He was in a dark place and just needed someone to offload to.  He was rather emotional and I felt quite protective of Rachel as he shared stories of his childhood which were not nice to hear.  Then something clicked in his brain and you could see the shift in his eyes as if someone was talking to him in his head and said: “this is too dark, it is time to put a smile on your face and add some warmth to your heart”.  He dramatically stood up and declared that the next village was calling.  He grabbed his staff and started singing loudly as he trundled down the mountain.  Within a few minutes, he was a small dot on the horizon and I wondered to myself “did that really just happen?”.

A bit of luxury, why not? 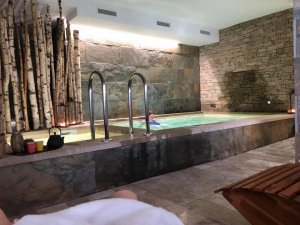 We enjoyed a bit of luxury!

Our plan was to walk a total of 15 miles to Molinaseca but sometimes an opportunity happens and your plans change.  As we descended down the mountain, negotiating a slippery steep shale terrain, we reached the small village of Acebo.  We stopped at the first cafe on the outskirts of town and enjoyed a long coffee break whilst we waited for Sue & Julie.  We were tired and drained from our day's walking, even though we had only walked 10 miles.  My feet were sore, and I had really had enough for the day.  We still had over 5 miles to walk which was a rather daunting prospect.  Sue and Julie joined us for coffee (my 2nd cup!), and we made the decision that we would stop here in this rather quaint village.  Acebo was bustling with pilgrims and had a nice vibe.

On the way down the mountain, we had consistently seen signs of an Albergue that had a spa and an outdoor pool, it was calling us!  It looked divine and exactly what the doctor ordered.  We left Sue to have lunch with some other pilgrims as she had decided that she was going to walk to Molinaseca and continue the trip, so we parted company as we ventured into the most exquisite hotel/spa resort that you have ever seen!  Wow, this place was amazing! We were about to indulge in a wonderful spa.  Why not?  For the rest of the afternoon and evening, we became tourists rather than pilgrims and boy did it feel good!

Rachel and I enjoyed a hot stone massage, steam room, magnesium pool dip and general lazing in the Spa.  We then joined Julie up by the pool and enjoyed the views (and I'm not talking about the landscape – see video below!).  The food was amazing as we enjoyed the company of a few other pilgrims.  They say the Camino provides and it certainly did today!

Our pilgrimage continues tomorrow but for now, we are enjoying a bit of luxury.

Pilgrims entered into my book today 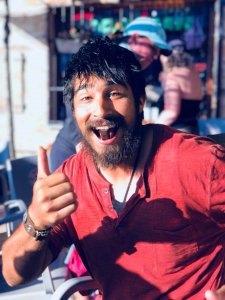 Santiago (Santi) from Texas. His luxury item was a necklace of a wolf that he cherishes. This was his 2nd Camino. 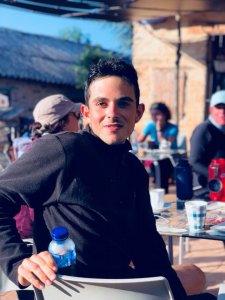 Oscar from Ireland – he was carrying a humungous rock in his pack and was feeling rather hung over from yesterday's party in Rabanal. 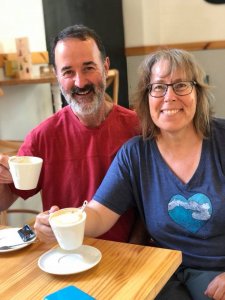 Our Camino Family, Louise and Daniel from France. We loved these guys. They wore “Life is Good” t-shirts every day. 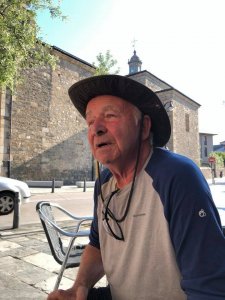 A special German friend who touched my heart. His name is Peter and he lost his wife to cancer a few years ago.