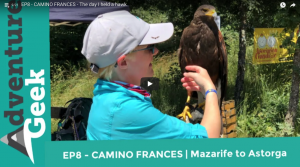 The day I held a hawk, had afternoon tea and prayed with Spanish monks

Warning: Sorry about the video section of Rachel's blisters

We left the Albergue in Astorga around 8 am feeling disappointed that we hadn't taken the time to explore this amazing city the previous night.  As Rachel, Sue and I followed the yellow arrows across the town we walk by some amazing buildings.

Rachel and I both struggle to walk far in the mornings without breakfast.  Fueling our bodies for the morning hike is essential for us, however, Julie has a different mindset. Julie likes to truck on and get a good 3-5 miles under her belt before indulging in any type of breakfast.  The calling of a cafe con leche is her motivation to make a dent in the day's hike.  We are all different and it is so important to “hike your own hike”.  This little process was often our daily routine and this morning was no different.  Rachel, Sue and I reached the first cafe on the outskirts of Astorga and stopped for a cafe con leche, orange juice and a croissant.  (Actually, I think Rachel had a cup of tea!).  After we fueled up we threw our rucksacks on and increased our gears as we tried to catch up with Julie.

The Fountain of Health Was Inspirational

Today has certainly been the best day so far.  About half a mile outside of Astorga we stopped again as we approached a small church along the way.  Sue speaks excellent Spanish and translated the plaque by the small fountain at the front of the church.  It read “Fountain of health”.  We took off our packs and ventured inside.  The church was dinky and full of candles.  A fellow pilgrim (Fergus) was sitting on a pew at the front looking very peaceful. Sue got chatting to the host of the church who was collecting donations and stamping pilgrims passports and her story was quite incredible.  She was 83 years old and had walked to the church every day to drink from the fountain of health.  She claimed to have never had a day's illness in her life and she truly believed that the fountain was a magical source for a healthy life.  Apparently many local people do the same thing.  (See video for the inside of the church and the lovely lady)

I took the opportunity to fill my water bottle with the sacred water … you never know it may help with these painful blisters! 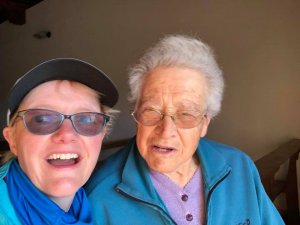 Feeling rather spiritual and warmed by the hug of the elderly lady, we marched on knowing that Julie was probably in the next village enjoying a coffee or two.  As we approached Murias de Rechivaldo we spotted the now famous red walking poles outside – we found her!  As we had already stopped twice this morning, Rachel and I decided that we would only stop for a quick coffee break.  I took out my journal and made a few notes.  It was at this very village that we got talking to two new pilgrims who were to soon become part of our Camino family.  Anita and Denise (teachers from California).  I took photos and printed them out, asking the question “what is your luxury item?”.   Other characters that were added to my little book today can be found at the bottom of this blog.

My little book is coming together nicely and people are now starting to ask me about it (which I secretly love being the centre of attention!).

After hiking another 3 miles we stumbled upon the most random of places known as the Cowboy Cafe.  Here we had the most amazing Pina Colada ice smoothie that you can ever imagine!  It was a slice of heaven in the blazing heat.  We didn't stop as long as it was now nearly lunchtime and we had only managed 5 miles (8km) – we still had a long way to go.  We chatted with Kimberley (The Weather Girl).  Everyone knew Kimberly who was carrying the same trekking umbrella as us, hence this nickname.  She had a great story to tell (see details below).  We also bumped into Rob and Sheralee again.  Right, onwards and upwards!  Today is taking far too long but I am loving every minute of it!

A random guy holding a hawk! 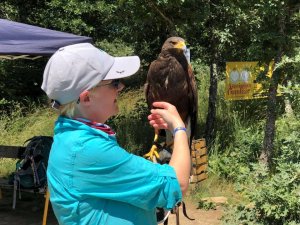 Me and the hawk

On the last leg of today's journey, to our delight, we came across a guy in full medieval gear. We watched other pilgrims just walk on by, but I couldn't resist and we stopped again to take a look at the hawk (which was ironically called Julie – lol!).  The guy placed this huge bird on my arm and I was mesmerised by its beauty.  Rachel decided that she was not keen to hold the hawk, but she was keen to put the heavy helmet on and have a sword fight!  So there we were, in the middle of Spain, having a sword fight…. how random is that?  (See video for footage)

The English Albergue with the strict rules!

We arrived in Rabanal around 1.30pm.  It was similar to arriving at a holiday park as there was a huge sign at the entrance to the village with a map and a list of hostels (which had numbers allocated to them).  We soon found our hostel and patiently waited until 2pm for it to open.  Rachel and chuckled at the sign on the front door that said: “We only accept pilgrims who have walked with their packs on their back and have not taken any other means of transport to get here apart from their feet”.  So if you had slack-packed (used luggage transfer service) then you would not be allowed in!  We witnessed them turning a few people away.  There were plenty of hostels in the area so no-one was left on the street.

The Albergue was brilliant (although not everyone agreed with us) and was hosted by two English people, Pete & Anna.  The reason why this hostel was not for everyone was due to the rules.  Ten or so of us were issued into the backyard and told to complete a form, we were then given a “talk” about the rules of the hostel.  It was a bit like going back to school, but at least we all knew what was acceptable and what was not.  I then found out that Peter was a school teacher in Northampton before he retired – that was weird that he was from our hometown!

They served traditional English tea at 4.30pm (so I joined them at 4.45pm during halftime of the England bs Sweden match). What a match!!

The monk with the high pitched voice

Peter and Anna urged us all to join the monks for prayer at 9 pm.  I’m not sure how to describe that experience!  Rachel, Julie and I sat on the back row and within 10 mins of monks doing their thing we got the giggles.  I know we shouldn't have and I know that it was really rude, but there was one particular monk who had an unusually high voice, which just sounded very odd.  As we were sitting at the back of the church we could see the congregation in front of us.  I lost count of how many shoulders were jiggling up and down as many other people had a similar reaction to us.  That was one for the memory bank!  30 mins of listening to monks chanting, in Spanish, was a unique experience and probably not one I would wish to repeat.

I have just recorded Rachel’s blister as people just won't believe how big it is! Video to follow in the next day or so on the Adventure Geek page. 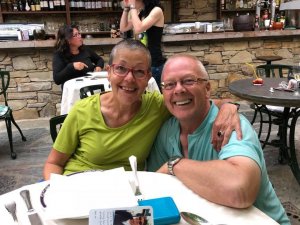 Sarah and Steve from Yorkshire in the UK. These guys were real adventurers and spend lots of time travelling.
Luxury items: Fridge magnets and the ring that Sarah was wearing that her daughter had given her. 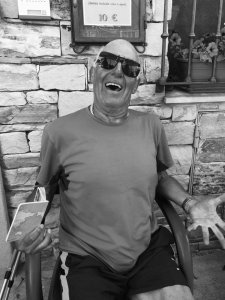 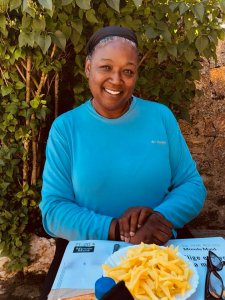 Kimberley from California was learning Korean and her luxury item was her umbrella. 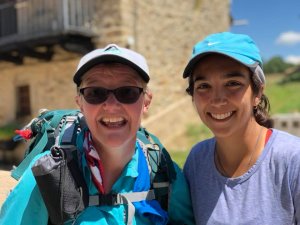 Cristina from Texas who was walking in memory of her mum. Luxury item was a hammock which she loved. 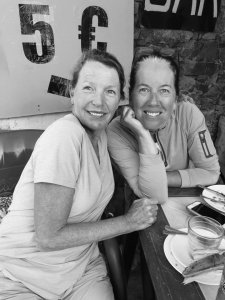 Denise and Anita from California. Luxury items were an eyebrow pencil and a scarf. 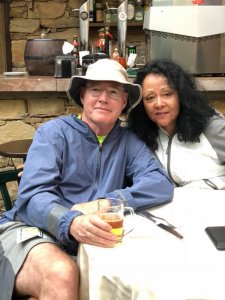 John and Ana from USA – their luxury items were a muscle stretchy thing and a posh headlamp.