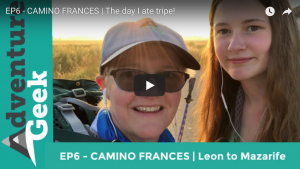 The day I ate tripe!

We left the monastery in Leon around 7 am with a new Camino friend (Sue from California). The walk across this beautiful city at silly o'clock in the morning was very different from last night. The streets were empty 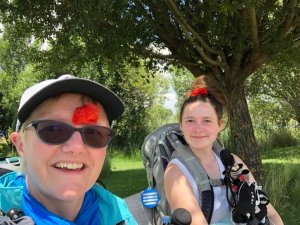 Can you spot the poppies?

with exception to the click-clacking sound of the pilgrims walking sticks.

It didn't take us long before we stopped for breakfast on the outskirts of the city.  Here we had a few surprises.  Sue revealed an avocado that she had been carrying in her back and consequently spread it over some hot warm toast (i've never had avocado on toast before!), and then the cafe owners supplied us all with fresh orange shots and free cake!  What a great way to start the day.  We were fueled up and as we stepped out onto the pavement and glanced to where the arrows were pointing, we realised that we were about to complete a climb.  Oh goody!

Rachel and I had a good giggle today as we both placed poppies in our ears / attached to our packs / caps and we tried to see how long it was before Sue & Julie noticed.  The things you do to amuse yourself whilst on the Camino!

We’ve had a good giggle today but the largest laugh came from my choice of lunch. We arrived in Casa CulturalSan Rogue which looked like the perfect place for lunch.  I was getting a bit fed up of tortilla, so I opted for the rather lovely looking, hot steamy stew that was bubbling away.  Now, I learned a lesson that day, which is to always ask what the meat is before you purchase it.  Whilst I was collecting my stew and taking it to the table outside, little did I know that my best friend was in the process of asking the waitress 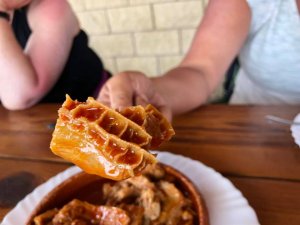 This was just terrible! Tripe!

what was it that I had just bought?  “El estomago del callos” (Stomach of a cow)… Did my best friend tell me that this is what I was about to consume?  Nope!  Her thought process was “if Julia enjoys it then she will say nothing, and if she hates it then she will let me know”.  Well, let's just say that I will not be purchasing tripe ever again.  I took one mouthful and thought I was going to throw up!

Sometimes the unexpected times are the best!

We had an impromptu picnic/break by the roadside which was very surreal.  There we were, eating juicy apples, crackers and cheese whilst sitting on our rucksacks and watching the world go by.  Rachel and I were on one side of the road and Sue & Julie were on the other, with the odd, random tractor passing between us.   I know it may sound boring, but it was the only bit of shade for miles and it was pure bliss.

The guidebook tells us that we were heading to Villagangos, however, there are many alternative routes on this last section of the Camino Frances, so we chose the more scenic route.  We arrived in the small village of Mazerife and we had a choice of places to stay.  There was a small private hostel on the right which looked very cute and welcoming (but expensive), and a larger hostel on the left which had a swimming pool.  One of Julie's goals on this trip was to stop in a hostel that had a pool, so we all turned left and followed the signs.  Have you ever walked into a bar and felt completely out of place?  As if you had two heads or something?  Well, that is how we felt when we walked into this hostel.  The buzz of the room went deadly silent and we simply looked around, nodded to each other and walked out again.  It was a bad vibe so we decided to take a look around the village and see what else was available.

A few hundred yards down the road we turned into a small square that hosted a dinky church with three storks on the steeple.  Opposite the church was a hostel called Tio Pepe (uncle Pepe).  How can you not stay in a place with such a wonderful name?  We checked in and secured one room with four beds – result! 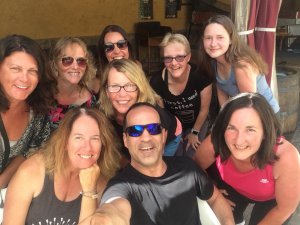 Armando with his girls!

The evening became very interesting after a few jugs of Sangria, and our Camino family grew.  Tonight we were introduced to some interesting characters, who allowed me to take their photos and add them to my book.  Probably the loudest and most vibrant of characters that we were fortunate enough to meet that evening was Armando from Italy.  He spoke excellent English and revelled in the ladies attention.  He even took this photo so that he could send it to his wife.  His humour was infectious and we were to meet Armando again and again throughout our journey.

Dara from Cork – the king of one-liners

That evening, Rachel and I dined with two guys from Ireland (although we found out that they had not known each other before the walk and that there were both hiking their own hike).  As I type this I am looking at the photo of Dara and a smile spreads across my face.  As the days progressed we realised what a very dry and wicked sense of humour he has.  Dara is the king of one-liners but at other times he was a very quiet and private person.  Dara was carrying a massive camera that he had hardly ever used.  The camera was his luxury item.

The other character that was on our table that evening was Fergus from Dublin.  What can I say about Fergus?  He was one of those characters that everyone knew for one reason or another.  Everyone seemed to have a “Fergus” story.  We all seemed to get to know Fergus quite well, even though we had not spent much time with him. 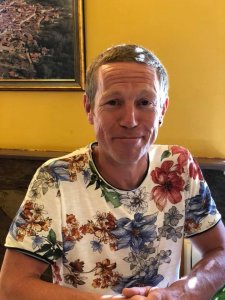 Fergus's walking strategy was “walk fast”.  He would speed by us and then we would catch up with him later that evening at a hostel.  He would always stop and say hello.  Fergus was the first person that I met who had only mentioned that he was walking the Camino for religious reasons.  He was on a true pilgrimage, which included having no communication with home and not even a mobile phone.  He was there to figure out what he was going to do with his life.  We lost track of Fergus after a few days, although the stories kept appearing on the trail.  I finally caught up with him in Santiago where he was not overly happy as a homeless person had stolen his rucksack with all his belongings, including his Camino passport.  I heard that he made it home though.  If by any chance he is reading this blog, then I wish you well dear pilgrim.

Fergus was not carrying any luxury items, but I think that the t-shirt he is wearing in this photo should be his special item – what do you think?

Even though I have developed sore feet (no blisters yet, just red sore hard skin) and pains in my shins, it’s still been an amazing day. We’ve met lots of new people from all over the world and experienced some strange foods.  Life is good on the Camino!

WEATHER: Back into the 30’s now and the umbrella has come in handy.