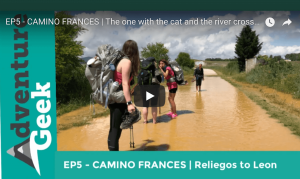 The one with the playful cat and the river crossing

I went to bed rather late as I was watching the nail-gripping England vs Columbia world cup match. I think I woke people up by screaming at the TV as the match went to penalties and was very exciting (considering I never watch football!).    I didn't sleep brilliantly for a few reasons:-

We woke up around 6 am and had set off in the rain by 7 am. Little did we know that today we would be going for a paddle!

I grabbed my journal and wrote some thoughts down whilst camped out at the first cafe called Las Casina in Villamoros De Mansilla.  This is what I wrote:-

So far we have avoided thunderstorms which we can see and hear in the distance.  We enjoyed a very long breakfast at the first cafe and met a very interesting lady called Christianne from Philidelphia” 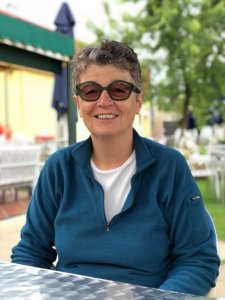 Christianne from Philadelphia agreed to read my “dice”

Chrisinanne was the first lady to make an appearance in my little book of Camino people today.  She was very spiritual and when I asked her about her luxury item she told us about the dice that she was carrying.  Apparently, she reads people using a set of dice, and this can help solve the person's problems.  She has been reading quite a few people during her Camino adventure and I was looking forward to catching up with her in Leon later that day where she agreed to read mine!

You see some strange signs on the Camino, and today I spotted my very first horse-poo arrow! (see video below).

The rest of the day was a bit of an adventure.

The sky turned to dark and angry clouds and then the thunder and lightning started.  Walking in thunder is not too bad, but lightning is very frightening (Thunder and lightning, very very frightening – isn't that a song?).  Anyway, we reached the town of Villarente and dived into a German/British bar (yes, it was a bit weird.  There were red telephone boxes, huge pictures of London Bridge etc, and we were served by Germans who didn't speak English).  Anyway, whilst sheltering from the rainstorm we saw Jacko and AnnaMaria (the couple we met yesterday) walking by the pub with their poncho's on. I shouted at them and they stopped with us for a coffee whilst we discussed the possibilities of getting a bus to Leon instead of walking in this weather. 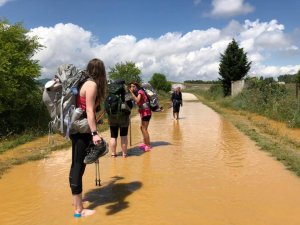 Shoes off, it's time for a paddle!

Should we get the bus?  It was a 2hr wait until the next bus, and it was only 8 miles (just over 2 x parkruns), so the vote was unanimous, we would walk!  We could do this!

Whilst we were in the bar the cutest cat ever decided to camp out on Rachel's rucksack.  As the journey towards Santiago got nearer, we would find that all sorts of animals had a liking for Rachel's rucksack! (see video).

Adventure number two of the day was just around the corner.  A group of pilgrims had stopped in front of us and we were curious why.  By the time we reached them, we could see that the path ahead was flooded.  There was no way to avoid it, we needed to remove socks and shoes and just wade through the muddy brown liquid!  Boy, was it cold, but really good fun! (see video). 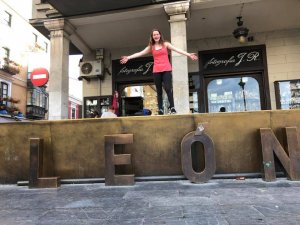 We made it to Leon!

The last part of our journey was rather challenging. Rachel's blisters are huge and very painful but she hardly moans about it and just gets on with it.  I am not sure that the muddy puddle helped though.  We eventually reached the city of Leon, but like most cities, it took us nearly an hour to actually get to the centre.  As we turned the corner to see the Cathedral I was astounded.  In hindsight, I really wish that we had taken a rest day the following day to explore this amazing place, but I will be back!

We wandered around looking for the hostel for about 30 mins before eventually giving up.  I dived into the Tourist Information Centre and they gave us a map and pointed us in the right direction.  We found the lovely old monastery which is now a Municipal Albergue and settled in nicely.  As we had Rachel with us they gave me, Julie and Rachel bunk beds in the family area which means it was nice and quiet.

We bumped into Christianne who walked around with us for a while, but then went back to the hostel whilst we grabbed something to eat (Tapas and wine in a cute little bar on a side street).  We never did see her again so we missed out on the dice reading!

Our first meeting with Sue from California 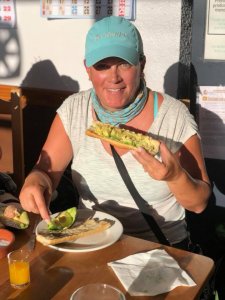 Sue from California, our Camino Family.

As I was hanging out my washing to dry I noticed a lady who was looking rather lost.  Are you ok? I asked.  She looked delighted that I spoke English and subsequently revealed an amazing story.  Sue had been walking the Camino with her husband from St Jean, but his Camino was over and he had to fly back to the USA.  Sue was not keen to continue on her own so she was flying back with him.  Whilst sitting on the plane she felt quite poorly and rushed to the toilet to throw up (sorry about the details!).  The cabin crew heard her, and then the captain made the decision to throw her off the plane!  She made the decision there and then that she was meant to be walking this Camino by herself and grabbed a taxi back to Leon, whilst her husband continued his journey back home.  Sue was standing in front of me saying “What on earth have I done?”.  I was the first one to say “You can walk with us tomorrow if you would like?”.  We agreed to meet at 7 am the next morning and our Camino Family was coming together nicely.

It’s been a long day but certainly the most enjoyable. It’s strangely quiet. Where are all the pilgrims?

It is so rewarding to see the landscape change. I was expecting the Meseta to be inspirational but there are only so many wheat fields and walking by a road all day that I can take. Give me lush green fields and kestrels flying overhead anytime.

We are ready for the next stage and happy to say goodbye to the Meseta.

Posted in Adventure Journals, Blog, Camino France and tagged Camino, Camino Frances, leon, pilgrim, pilgrimage
← A Camino Experience Through The Eyes of A TeenagerFive Amazing Reasons Why I Love Geocaching →