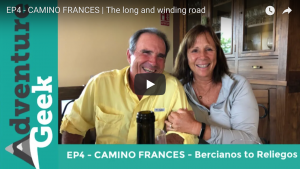 The very long and winding road

This morning was super weird!  I woke early (about 5 am) and decided to creep out of our room and go and find a quiet place to write in my journal and have some “me” time.  The scary thing was that I couldn't get out of the building.  I walked down the corridor and the door was locked to the front entrance. I had no-where to sit and I didn't want to go out of the fire escape and I knew I wouldn't be able to get back in.  There was no-one else around, just me tiptoeing around in my jim jams like a thief in the night!  I snuggled back into bed as quietly as I could and then played on my phone until Rachel and Julie woke up. 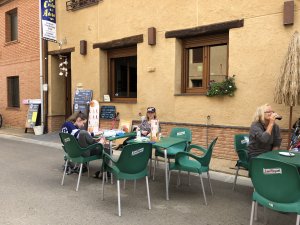 The Camino is the only place where it is acceptable to pop blisters at a cafe!

We left Bercianos in the mist around 7.45am.  There was something very eerie about walking through this quiet village in the early morning fog.  We were heading for Religious which was only 13 miles.   We had our stride on and reached the first village called El Burgo Ranero by 9.15am.   We stayed in this fantastic cafe a bit too long, but hey ho, it was a welcomed break and we knew there were no other cafes for the rest of the day.

Why was this particular cafe special?

Not only did we sample an amazing custard cinnamon thing (sorry, I have no idea what it was, but you will see it in the video below), but the lady who owned the cafe went out of her way to make pilgrims welcome. She helped with blisters (actually she turned up with a carving knife and asked Rachel if she wanted help chopping off her foot?).  She was just very hospitable.  She made us all a pack-up for lunch (bocadilla's) and wrapped them in foil for us.  Apparently, there had only been eight pilgrims that had visited her today.  She explained that the height of the season was in May/June and this is actually a quiet time of year for them.

A quick stamp in our credentials and we was off.

Only 8 miles left for the day… easy! Nope! 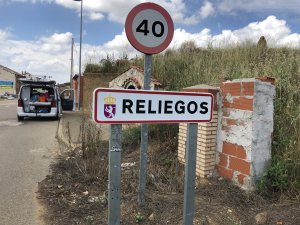 The next 8 miles followed one long road. Nothing to see and hardly any pilgrims to talk with. When the trail is that repetitive it is very mentally challenging.

All along this part of the Camino (known as the Meseta) are service areas specifically for walkers. There seats and shelters or trees which protect you from the hot sun and are welcomed with open arms by pilgrims.  In the video you will see Rachel rolling her feet with the foot massager at one of these service areas.  I later found out that you are allowed to pitch a tent and camp in these facilities (food for thought for a future Camino?).

When we eventually saw the signs for the town that we are staying in tonight (Reliegos) we all did a little dance on the side of the road.  We saw more of the hobbit houses but there was not much in the way of entertainment in the village just a bar and a small shop.  We purchased a few bits and bobs (namely shower gel as I had left my lush bar at the last hostel), and apples etc for the next day's walk. 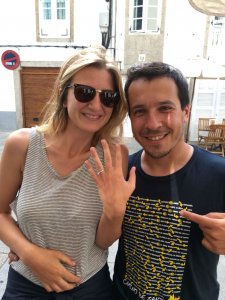 We stayed at the Vive Tu Camino (which you can book on Booking.com).  We had a small bunkroom of just five beds and we shared it with Giacomo and Anna Maria from Italy.  They have a really sweet story.  I was taking their picture and I asked: “What is your luxury item?” – when Anna Marie went to the toilet, Giacomo told me that he had a very special item in his pocket.  It was an engagement ring and he was going to propose to Anna Maria when they reached Santiago.  By the way, we found out later that she said yes!

Other luxury items for these two were:

If you want to see what the hostel is like then take a look at the gallery on their website here.   The best thing about this hostel was that we had real lightweight duvets!  No sleep sheets tonight.  It was heaven.

The mist eventually cleared around 9.30am and we were left with a glorious day of sunshine.

Rachel has bad blisters. She had to get the needle out to pop a huge one on the side of her foot which made a small puddle on the floor. I couldn’t watch!

That’s about it for today.

Time to watch the football as England are playing!  Bye for now