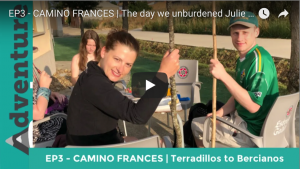 The day we unburdened Julie of 6 lbs!

It took me a while to get off to sleep last night as there was a donkey outside making donkey noises.  A melatonin tablet did the trick! (Thanks to Susan R for that tip!).

Today we are walking from Terradillos to Bercianos.  Julie set off like a locomotive this morning and Rachel and I just chugged along like an old steam train.  It is so important to listen to your body and “hike your own hike”.  Julie certain has a zest for the trail first thing and is not even that bothered about grabbing breakfast before she hikes.  Rachel is the complete opposite and needs about 1hr to wake up, allowing her body to react to a hot cup of tea and a buttered croissant.

We are only in the first few days of our hike but little rituals are starting to appear already.  Julie enjoys the coffee stops, chatting with other Pilgrims and taking her time (after her initial 5 mile bullet train hike).  For me, I struggle to sit around for long periods of time in a cafe.  I like to refuel, air my feet, have a quick chat and catch up and then I'm off to the next stop.  We are all very different.

Who was added to my book today and what was their luxury item?

I added three entries to my little book today. 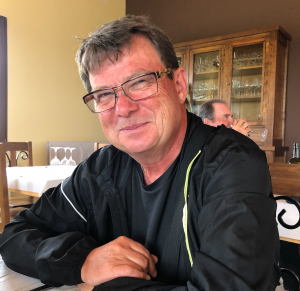 #1 – The first person was Ljubo (he called himself Lou) and was from Slovenia.

Lou had a very interesting and heartfelt story which I won't go into publically.  We met Lou at the hostel in Bercianos and shared an evening meal with him.  He was Julie's saviour yesterday as he was walking in front of Julie like a guiding star.   Lou spoke excellent English and gave us all lessons on “walking with purpose”.  His luxury item was a book that he reads everyday. It is a book all about self-confidence and building his confidence was one of the main reasons for walking the Camino.  Lou was walking big mileage (30 miles a day) as he had a flight home on a particular day, so we said goodbye knowing that it was highly unlikely that we would see him again.

#2 – Rob and Sheralee from Mexico

Rob and Sheralee from Mexico

This pair was born to travel and they have walked the Camino Frances numerous times already.  They live their life out of a rucksack and they know how to have a good time.  They are both quite spiritual and we were to bump into these two throughout the whole of our journey over the coming days – we even saw them arrive in Santiago which was quite emotional.   Luxury items were perfume and hair straighteners for Sheralee and Rob made me smile when he explained that his luxury item was his wife's new sleeping bag! 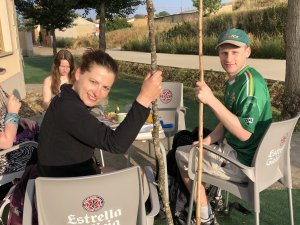 Avril and Colin from Cork

#3 – Avril and Colin from Cork in Ireland.

We met these two at a small cafe in Moratinos during our first stop of the day.  Avril was hobbling as her blisters were beyond painful.  They both carried homemade walking sticks and you could tell they were brother and sister by the way they spoke to each other.  Avril did most of the talking as she went on to explain (with raised eyebrows) the core items that her brother did NOT bring on his Camino.  Yep, Colin was in such a rush that he forgot to bring his walking shoes (he was wearing his trainers), a towel and his sleeping bag.  She then told us that she had three sets of really nice “going out” type of outfits in her rucksack which she will never wear!  We walked with them for a while, but they soon dropped behind and the hobbling Avril was soon a spec on the horizon. 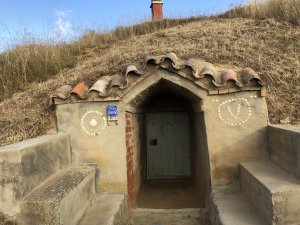 In the tiny hamlet of Moratinos where we met Avril and Colin we stumbled upon a house which can only be described as a hobit house.  It was fascinating to look around (see video below).  The roof was all made of grass and apparently they now store wine inside.  We saw quite a few of these over the next few days.

We Reached The Official Halfway Point!

Just before the town of Sahagun we reached the official halfway point of the Camino Frances route (see video).  It was a bit like walking through Jumangi gates!  The place is called Ermita de la Virgen del Puente and we spent about 15 mins just having a look around and sitting in weird sculptures.

Sahagun is a bit of a dump!

All three of us agreed that Sahagun was a place where we didn't want to spend too much time.  It was a large town and we moved through it quite quickly.  I can't really explain why we didn't find it appealing?  Perhaps it was the level of graffiti or the volume of closed businesses, but even the buildings were not really that attractive.  Unlike other large towns such as Carrion De Los Condes or Estella it just didn't have a good vibe.

Julie made a good decision to empty her pack and forward some of her gear that she was not using to Santiago.  It was the first time that any of us had used the Spanish postal service and it was really easy to do.  Simply look for the yellow Officina Postal Correos and ask the postal worker for a box to send your items.  Julie ended up sending one box that contained nearly 6lbs of gear.  She then collected the box in Santiago Post Office later in the month.

15.9 miles, 25.5km or 38k steps Rachel and I finally reached our hostel for the night in Bercianos. Wow! We have been so lucky with our hostels and we’ve not yet stayed in a bunk bed. Today’s hostel in  Bercianos is very modern. A room with four beds and our own bathroom. Just €10 each. Result!!

SUMMARY OF THE DAY

WEATHER: Very overcast but humid. We had a nice cool breeze so perfect walking weather (no rain!).

TERRAIN: Very flat. Some beautiful landscapes, but also quite a bit of road walking.

FOOD: I’ve not eaten brilliantly today. It’s been a mix of cakes, pastries, beef jerky and tortilla wraps with cheese. Must do better tomorrow.

HEALTH:- My shins are causing me some pain. I will see how they are tomorrow but if the pain continues then I’ll buy a compression sock thing. My toes are also taking a battering. I’m sure my feet have grown and an extra size in the last two days!

I’ve also got shoulder pain from the rucksack, but resolved with the assistance of my trusty buff!

Rachel is suffering from her arches on her feet and Julie is having issues with the soles of her feet. Apart from that we are not really moaning :-).

THOUGHTS OF THE DAY

✅ I really want to say that the Meseta is enlightening and wonderful, but if I’m telling the truth then it’s a tad monotonous with ghost-like villages. But, we have good company, our health and hot showers!

✅ Thin places – a thin place is where you feel the presence of the spirit world on the Camino. I had many “thin places” today. It was quite surreal. I walked 8 miles then realised that I hadn’t thought about a single thing in that time. I was just in the moment enjoying the rhythm of my walking. How can you walk that far and not think of anything?? Weird!

✅ We walked through the halfway point which felt like something out of Jumanji! (See video)

✅ Walking by the roadside for miles zaps your energy and can get you down. This is the time to plug in your earphones and sing your heart out to Ed Sheran!  Castle on the hill 🎵🎵🎵🎵🎵

✅ Rachel and I arrived at the Albergue in Bercianos around 2,45pm. A lovely hostel with a modern feel to the place.

Time for a glass of vino and a pilgrim meal!

Posted in Adventure Journals, Blog, Camino France and tagged Camino, Camino Frances, pilgrim, pilgrimage, Terradillos to Bercianos
← 10 Essentials That You Should Always Take On Any WalkCamino Frances – Bercianos to Reliegos →