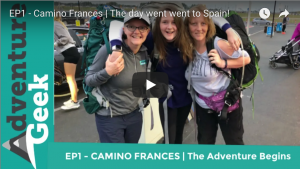 What a day! 18 hours of travelling was exhausting.

Rachel had a fantastic prom night and Matt collected her about 11.30pm.  She was not tired and I could not sleep as I wanted to hear all about it.  We chatted into the night and by 12.30am we had both fallen asleep.

You know what it's like when you know you have to wake up early, you never sleep properly. I remember watching the clock and eventually my watch vibrated on my arm with 3 am wake up call.  A quick shower and last min packing and we were on our way to Spain. The Camino was calling!  We met Julie at the motorway services where her son and daughter were saying goodbye.  We hugged everyone goodbye, wiped the tears from our eyes and set off to watch the sun rise over the M1!

Luton Airport is a crazy place!

By the time we reached Luton Airport (about 4.30am) the tiredness had worn off and had been replaced with excitement.  I hugged Matt goodbye promising that I would call him when we reached our destination.  He turned to Rachel and said, “look after your mum”.  She nodded and gave him a big hug back and then we were off!

Luton airport was crazy busy. We cling filmed our rucksacks (yep, we got strange looks, but I’m not paying £10 each for airport wrapping when you can buy your own clingfilm for £1.49 and do it yourself!).

They should rename the bag drop off zone to “queue for an hour zone”. I’ve never seen so many people. I was only here the week before and it was nothing like this! So an hour to drop off the bags and nearly 40 mins to get through security!  I was hugely disappointed as I had paid for an upgrade to the Airport Lounge but we simply didn't have the time to indulge in its delights.  To prove a point, and get some of my money back we literally spent 5 mins in the airport lounge, grabbed a coffee and a sausage sarnie and then dashed out again heading for Gate 3.  You would think gate 3 nearby …..,, wrong!  It's miles away!

The flight to Madrid was ok, then we had a taxi to the train station. I’d forgotten how awful Spanish Taxi drivers are, although I did like his taste in music… Ed Sheran.

Next stop was a 4hr train ride to Palencia. The woman behind us has a Rudolph the Red nose Reindeer ringtone, and the Spanish woman in front has Michael Jackson. The views from the train are amazing and we get a small insight of what lies ahead as we pass wheat fields, Spanish villages and snow capped mountains. (Yes.. snow capped!)

We eventually arrived at Palencia and our final leg of the journey was via Taxi. We listened to the latest World Cup match between Argentina vs some other country (It was amusing trying to understand the commentary in Spanish!)

We arrived at Carrión De Los Condes feeling completely exhausted and rather apprehensive. Our hostel is super cute.  We have one room with three beds and en-suite for just ¢55. We take a walk to the local supermarket and buy groceries in prep for tomorrow’s hike.  We reminisce about the last time we were here and I was pleased to see that the storks were still nesting in the church steeple.

We grab a bite to eat at a local cafe and get talking to our first pilgrims.  Jack and Andrew from Florida.  Two young guys who had started walking from St Jean.  It was exciting to chat with them, but you could see how tired they were.  We went exploring with a mission to buy Julie some walking poles.  We saw some great trekking poles at just €9 so she snapped them up.  Everything was coming together nicely.   By 9.30pm we had a belly full of pizza and carbonara and we fell into a blissful sleep knowing that we would be walking tomorrow.  We can't wait!