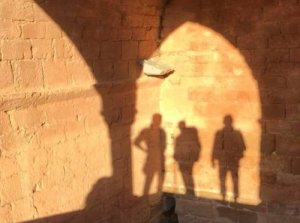 I am not going to lie, but I was absolutely terrified when I took my first solo hike along the Camino Frances route in October 2017. I was confident right up until the point that my husband waved me off at Milton Keynes station. As I was sitting on the train, heading for Stansted Airport I received a text from him “I don't say it very often, but I am very proud of you” – that was when I burst into tears and thought to myself “OMG, what on earth am I doing?”. I now felt that I had something to prove. I needed to make sure that I was brave enough to travel all the way to Spain on my own and just start walking.

As this was my first solo venture I decided to walk the same path as I had previously walked with Rachel and Julie the year before. Getting through customs and boarding the plane was no problem, but I did not understand French or Spanish so I knew my first challenge would be in Biarritz.

Be warned, Biarritz airport has soldiers…. with guns!

After landing, I collected Nellie from the baggage claim area and grabbed a coffee. I was surprised to see the airport filled with army soldiers with machine guns around their necks (not smiling!). I thought that perhaps there was some kind of special thing happening at the airport that day, but they were also there when I returned, so it must be the norm. They were rather sexy and they made me feel unusually safe rather than scared. I managed to find the bus to Bayonne and my confidence was growing. I could do this. I was not scared and I had a good chat with two girls from Austrailia who were also wearing backpacks with the Camino shell dangling from their rucksacks.

Google maps and Google translate became my best friends when I reached Bayonne as trying to find the hotel was easier said than done. But I checked in, purchased my bus ticket for the next day for St Jean and laid on the bed doing the starfish!

You are never alone on the Camino 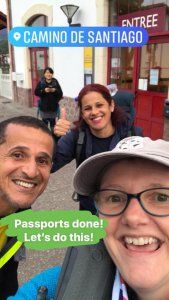 The Brazilian guy and his sister.

On the bus or train trip from Bayonne to St Jean, you can feel the excitement of expectant pilgrims. Everyone is apprehensive about their journey and the chatter is high. I got talking to a nervous Brazilian guy and his sister. He was an ultra marathon runner and super fit. Everywhere around you are pilgrims. You can spot them a mile off as they have walking poles, rucksacks and the shell hanging from their packs. It's hard to explain, but even though you don't know these people, you feel a connection with them. As you start your journey on one of the toughest days of the whole trip through the Pyrenees, you will receive constant support from your fellow hikers. You will see others suffering in the heat, or perhaps they are not as fit as they had hoped to be, but you will find yourself asking if they are ok. You share chocolates and sweets or energy bars with your fellow Pilgrims and the bond is built quickly.

No-one judges you on the Camino

As everyone is wearing backpacks and walking gear there is no instant judgement of people on the Camino. It is not until a few days down the line do you start to find out what people do for a living in the real world. You have no idea what car people drive, what sort of house they live in or what people's background is. Women are not wearing make-up (or not much), their hair is not being straightened and people are just people. This is hugely refreshing and one of the main attractions of a walk such as the Camino. We begin the walk as equals and end the walk as great friends.

You still need to have common sense

I have been reading posts on the Camino forum where a lady has been the victim of “perverts” who has exposed themselves to her (bless, her, this has happened three times to her on the Portugal route). There are cases of theft in Albergues on all routes and there was even a murder a few years back. But generally, life on the Camino is probably one of the safest places in the world to walk. If you use your common sense such as:-

If in doubt then buddy up!

If you have any concerns about walking the Camino on your own then check out the Facebook group which offers a women buddy system. I have not used this, however, there are great reviews about the system on the forum.

Did I feel scared at any time? 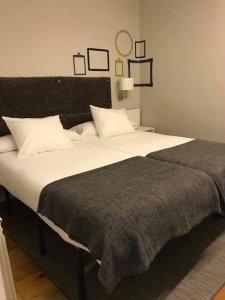 My bed for the final night.

Yes.  Just the once.  I found myself returning home from Logrono to Pamplona at 9 pm at night (last minute changes).  I had no room booked and I was in a busy city looking for a hotel or albergue when drunks were being loud on the street.  I was well aware that I was a single female walking the streets looking like a homeless person.  I phoned my husband who simply talked to me and kept me company whilst I knocked on a variety of Albergues to see if there was any room at the inn.  Finally, around 10 pm, still, on the phone with Matt, I knocked on the door of a hostel to which an old man opened the door very slowly.  Yes, he had a room and I was to follow him up three flights of stairs.  Dogs barked in one room, whilst my very helpful husband started saying “you know this old boy is leading you to a dark room where he will chop you up into small pieces, don't you?”.  My husband has the strangest sense of humour!  Needless to say, I ended up with a huge double bed all to myself with a private bathroom.  That was the last night of my solo trip and next time I will be a bit more organised about the journey home!

Any type of solo adventure will always have an element of excitement and nerves, but rest assured, I have felt more scared in Newcastle or London than I ever did on the Camino.