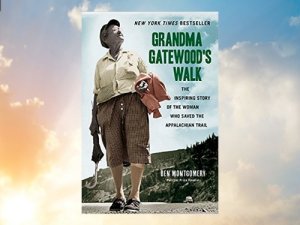 I had never heard of Grandma Gatewood until I was listening to an interview with the author of this amazing book on The Mighty Blue Podcast.  As soon as I heard that the first woman to ever complete the Appalachian Trail was in 1955 and she was 67 years old I knew that this had to be on my “to read” list. 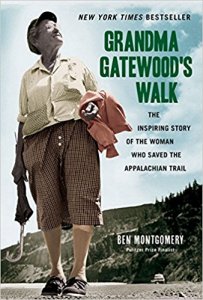 Emma Gatewood told her family she was going for a walk and left her small Ohio hometown with a change of clothes and less than two hundred dollars. The next anybody heard from her, this genteel, farm-reared, 67-year-old great-grandmother had walked 800 miles along the 2,050-mile Appalachian Trail. And in September 1955, having survived a rattlesnake strike, two hurricanes, and a run-in with gangsters from Harlem, she stood atop Maine’s Mount Katahdin. There she sang the first verse of “America, the Beautiful” and proclaimed, “I said I’ll do it, and I’ve done it.”

Grandma Gatewood, as the reporters called her, became the first woman to hike the entire Appalachian Trail alone, as well as the first person—man or woman—to walk it twice and three times. Gatewood became a hiking celebrity and appeared on TV and in the pages of Sports Illustrated. The public attention she brought to the little-known footpath was unprecedented. Her vocal criticism of the lousy, difficult stretches led to bolstered maintenance and very likely saved the trail from extinction.

Author Ben Montgomery was given unprecedented access to Gatewood’s own diaries, trail journals, and correspondence, and interviewed surviving family members and those she met along her hike, all to answer the question so many asked: Why did she do it? The story of Grandma Gatewood will inspire readers of all ages by illustrating the full power of human spirit and determination. Even those who know of Gatewood don’t know the full story—a story of triumph from pain, rebellion from brutality, hope from suffering.

Blimey, when you look at all the gear we have nowadays, I am purely amazed how this elderly lady completed this 2000 mile hike through a trail that was not yet complete with a sack, no tent or sleeping bag, trainers and very little food.  She crossed rivers, she climbed mountains and had bunions to contend with.  I enjoyed most parts of the book and you feel that you really did get into her head and understand the motivation for this momentous task.  She was married at a young age of 19 to an abusive guy (27 years old)  who raped her multiple times a day.  She was beaten constantly and her escapism was to get out into the mountains and the fields.  Once her  11 children had finally left home, she decided to take a walk.

The only parts of this book that I skipped were the laborious history details.  The author had a tendency to go off on a tangent about the history of the trail, or the history of transport in America at a vital part of her story, hence I skipped forward to continue with her own personal journey.

Grandma Gatewood (as she was fondly known) completed the trail three times in total, being 75 years old during her final walk.

I was totally inspired by this lady and I will never complain about sore hips or blisters ever again!