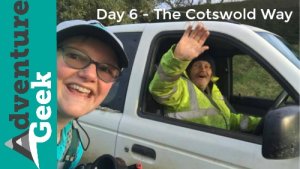 Weather: Started off overcast and quite warm. By 12 noon the heavens opened and it rained all the way to Hawkesbury.

The Story of the day

Last night I arrived in Dursley at The Old School House (Airbnb) at 7 pm. I was cold, wet, very tired and not really in the mood for chit chat. The hosts showed me my room, introduced me to Hector (12 yr old dog) and explained that the bathtub was three floors up.  They then announced that they were off out to Bristol for the evening and to make myself at home. She told me to keep my bedroom door shut unless I fancied sleeping with the dog!  The dog was no trouble at all and it was nice to know that there was a bit of security in the house.  It did feel strange being in a house that I was unfamiliar with and the owners were out on a jolly.  I was keen to try new jetboil fash cooking system so I set up camp on the bedroom floor, right next to the Piano!  Yes, there was a piano in the room but it was covered in dust and looked like it had not been touched in years.

My Jetboil is wicked!

I grabbed my Uncle Bens Chicken Rice Meal and boiled my water in my new snazzy cooker.  I thoroughly enjoyed my meal, quickly washed up and packed Nellie so I could make a quick escape in the morning.

I fell asleep quite early (about 9.30pm) but had a rather restless night. I woke up at 5am and went through to the kitchen to make myself a coffee. Wendy (host) had left breakfast out for me. I showered, dressed and packed the rest of my things then left them a note to thank them for their hospitality. It was 6.30am and I was on my way! Or so I thought…

As the door clicked shut behind me I suddenly remembered that I had left my Adventure Geek Box on the stairs.  I had no option but to make a phone call to the hosts.  Annoyed at myself for being so stupid, I reluctantly grabbed my phone and called the mobile number on the email from Airbnb.  Colin opened the door in his dressing gown looking like he was still fast asleep.  I guiltily thanked him for the box, breakfast, homemade scones (which were yummy) and told him to go back to bed!  Right, now I was on my way!

As you leave Dursley (yep, JK Rowling does live close by and named the characters in Harry Potter after this town), there is a very steep climb. I warn you now (if you are considering this walk) that you are about to give your calf muscles a bit of a workout.  There was a huge tarmac hill in front of me and it was as steep as it looked!  My initial thoughts were “it’s only 1 mile to Stinchcombe Hill, it won’t be that bad”, but it certainly took me a bit longer than usual before I reached the golf course clubhouse.   I sigh, as I always get lost when crossing golf courses, however, I was greeted by a fabulous sign saying “Cotswold Way – this way or that way” – that helped!  I consult the guidebook that tells me I can either turn left and enjoy a short walk the through the golf course, or I can take the long walk which takes me around the whole hilltop.  Both paths end up at the same spot, so I opt for the short walk.  I talked myself into it saying “Julia, you did 21 miles yesterday, you deserve an easy day”.

The Farmer With No Teeth 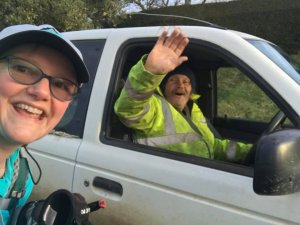 I met a lovely farmer who had no teeth and a real southern accent who called me “my dear”. He told me that he had lived here all his life and he loves the place. He gave me directions to Tynedale Monument, which took him ages to explain due to him having no teeth and the dogs barking wildly at me in the back of his van!  I waved goodbye, then completely ignored his directions, as I was following the trail and I wanted to keep to the true path as much as possible.  Bless him.

I eventually came upon Tynedale Monument built in memory of William Tynedale who was the first person to translate the Bible into English.  It was bitterly cold and I was looking forward to taking a well-deserved break and have a bit of a look around the tower.   The monument is quite impressive from the outside but sadly the doors were locked.  I took shelter from the cold wind in the doorway of the monument.  I devoured a packet of mini cheddars and a snickers bar to refuel my body and put a brave face on.  I can do this I said to myself!

As I left the monument it’s back to my beanie, buff and jacket to keep me from the elements.  Head down, my pace increases and I make a good indent in the next few miles.

I followed the scarp edge until I reached Westridge Wood.  I was thankful for those little acorn signs as there were so many path tracks within the woods that I knew I would surely become lost if they were not there to guide me on my way.

I exit the woods which eventually opens up into a beautiful meadow known as Wotton Hill.

There is a strange looking clump of trees that are protected by a circular wall called The Jubilee Plantation.   The story is a little bit weird and if you like trees then it’s time to skip this part!  The original set of trees were planted to celebrate the victory of the Duke of Wellington.  In 1856, the good folks of Wotton-under-edge decided that they would cut down all of the trees and have an almighty bonfire as a way of celebrating the end of the Crimean War.  It seems that the locals liked to have a bit of a party, so more trees were planted to celebrate Queen Victoria’s Golden Jubilee in 1952, which is when the wall was erected.  I expect that marked the end of the “cutting down trees” regime.

After I leave the Jubilee Plantation, I start descending down a steep path.  Descending only means one thing, I will soon be arriving in a town.

When you are walking on your own you have time to think and absorb your surroundings.  I was blessed with two lovely robins today. I’m not sure if they were the same ones but they kept appearing on fences or gates constantly throughout my journey. I talked to them quite a bit, which may seem strange (I talk to myself a lot on the trail).

Wootton Under Edge is a quaint small town

As I dropped down into the picturesque town of Wootton Under Edge I searched for a cafe. I didn’t need to search for long as there was a whole row of them! I took my muddy boots off outside and walked into the cute cafe in just my socks. I ordered a coffee and spent 30 mins chatting to the locals. Refuelled, I knew that the next hour was going to be another steep climb. I’m getting used to the pattern now. A descent into a town means an ascent back onto the trail. 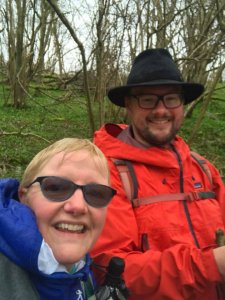 As I made my way over yet another golf course I spotted hiker with a backpack on behind me. I stopped to let him by as he was quicker than I. We got chatting and I enjoyed a 6-mile hike with my new special needs teacher hiker buddy called Tom. He’s doing the whole trail in 6 days, averaging 20 miles a day! He lives locally so his girlfriend was collecting him at the end of every day and then taking him back in the morning.

During most of the walk with Tom, it was pelting down with rain. My umbrella worked well and I was thankful that I’d taken it with me. It is amazing how much faster the time passed when I had someone to chat to along the route. I said goodbye to Tom at Somerset Monument (120ft) as he headed into Hawkesbury and I headed in the opposite direction in search of my B&B.

I arrived at my Air B&B at 2.30pm.  The rain was pelting down and I was soaked to the bone as I tapped on the cottage in the middle of nowhere.  The host answered the door and said “Check-in is not until 3pm”.  I was not really sure what to say?  Was she expecting me to stay outside in the rain for another half an hour?  She contemplated the situation and asked me to take off my boots and welcomed me inside.  She then said “you are lucky that the room is ready”.  I was very cold, soaking wet and I could feel my hackles rising but I smiled and thanked her for letting me in early and apologising for the inconvenience I had obviously caused.  In all honesty, the actual accommodation was probably one of the best on the trail.  I had a huge double bed, a lovely big bathroom to myself and even a little sitting room just for me.  I didn't see the host again that night and just kept myself to myself.  I indulged in a very long soak in the bath and actually watched the TV for the first time in a week.

Another good day on the trail.

Tomorrow is Cold Ashton, 14 miles. I hope the weather improves.

Posted in Adventure Journals, Blog, The Cotswold Way and tagged hawkesbury, The Cotswold Way, tynemount monument, wootton under edge
← High and Low: How I Hiked Away From Depression Across ScotlandHow Much Training Do I Need To Walk The Camino? →