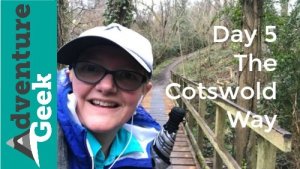 The story of the day – Cows!

After a hearty breakfast of fruit, yoghurt, porridge and then homemade pancakes it’s amazing that I could even walk one step! But as I hugged Diana goodbye I felt rather optimistic about my solo hike.

I placed my Adventure Box on the outskirts of Painswick and was feeling pleased with myself. I had no aches or pains and bags of energy. The planned 15 miles would be relatively easy and I should be home and dry at the Airbnb by 5.30pm (well-laid plans and all that!).

Did you know:  England’s most famous ghost can be found at Painswick Courthouse.

It is well documented that King Charles haunts the Painswick Courthouse. He stayed there during the Siege of Gloucester in 1643.  His ghost has been seen on numerous occasions in the grounds of the Court House along with some of his men

As I turned left into the first field I came across my first obstacle.  I had only been walking for 10 mins and I was already stuck in a kissing gate as the heavens above opened.  Poor old Nellie got a battering as I pushed and pulled and squeezed her through the turnstile.  I quickly decided to pull on my rain trousers, secure my pack rain cover and pop up the trekking umbrella before going any further.   I felt quite smug underneath my umbrella, even though I could not see where I was going.  I headed down the field and then spent 10 mins trying to find the next Cotswold Way sign.  If someone was watching from afar it must have been quite amusing as I kept walking from corner to corner of the field with an umbrella stuck to a backpack!  Eventually, I found the right sign and headed off towards a wooded area.  I was slipping and sliding in the mud but the rain had eased off so I decided that I should decloak and remove my rain gear.  Have you ever tried taking rain trousers off when your boots are full of mud?  I was soaking wet underneath but I think that was more to do with the sweat I produced than the rain.  Needless to say I never wore the rain trousers again.

Even though I’m on my own, I have my little acorn signs to keep me company (when you can find them!).

Cow Episode #1 of the Day

As I entered Nudge Hill I froze to the spot. Hundreds of cows were on the path that I was taking (perhaps an exaggeration, but there were lots!). I had my sticks and my umbrella but I didn’t know if this would scare them so I phone the cow whisperer, my Nordic Walking Instructor, Alison. Panic rose within me when I heard her voicemail so I left a rather pathetic”help me” message.  As I was putting my phone back into my shoulder pouch I accidentally pocket called a good friend of mine called Paul Dewick.  He answered and as I was putting my earbuds in my ears all I could hear was “are you ok?, where are you?”.  I was very confused.  Here I was in the middle of nowhere, in the pouring rain, sharing the scenery with 100 cows and a strange voice from somewhere was asking me if I was ok?  Perhaps it was God?  No, it was Paul Dewick! Once I realised what was happening I pleaded with Paul to stay on the phone whilst I navigated the cows. I know, it was all rather girly but I just couldn't help it!

He stayed with me through the whole experience, telling me not to give the cows eye contact, so I just looked at my feet.  I am halfway through the field and my confidence is rising as I can see the gate ahead which is now only about 200 yards.  I'm nearly there!  It was at this point when Paul decided to confess that he also has a phobia of cows.  Well, cows and seagulls. I am listening intently as Paul describes his worse nightmare which would be a seagull sitting on top of a cow! As I laughed out loud a friggin cow moo’d right next to me and I screamed down the phone! I survived the ordeal and thanked him for keeping me company. Just as I put the phone down and walked through the gate, the cow whisperer Ali, phoned back and gave me some practical advice, which came in very handy later that day!

Not the halfway point

The sun came out as I passed the “not halfway point”.  I chucked to myself as I wondered why on earth someone would erect a milestone that had absolutely no significance whatsoever.  The milestone was in the middle of the escarpment and read 55 miles to Bath on one side, with 47 to Chipping Camden on the other.  Is that just weird, or am I missing something?

I continue my journey and arrive at the beautiful summit of Scottsquar Hill.  I instantly checked Google to find out what Scottsquar means as I was sure there must be a story behind this unusual name.  Nothing.  Diddly squat, so I decided that the hill was named after a famous explorer called “Scott” and he had a “square” head.  Scottsquar (without an “e”).

Singing a duet with Ed Sheeran, I descend upon the old well – Cliffwell (not that I realised it was a well at first glance).  I peered behind the small barn-like building and discovered that it was actually a discarded well.  It’s a shame that it is no longer working.  The inscription on the head read:

“Whoer the Bucketful upwindeth, let him bless God, who water findeth.  Yet water here but small availeth.  Go seek that well which never faileth” – it is very poetic but I do not have the faintest idea what it actually means!

I navigated my way successfully to Haresfield Beacon which is yet another hill-fort.  The views were just breathtaking and I stopped to take photos and videos. I was confused as the sign for TCW pointed over towards a massive drop which didn’t seem right. So I did the sensible thing and followed the main public footpath. For about 20 mins. No signs. Poo! I then spotted a guy walking his dog and asked him for directions. He pointed back up to where I had just come from. I sighed. Fed up. He said, rather than going all the way back up again, just follow this path around and they join together at the base of some woods in the distance. Result! Or so I thought.

Cow Episode #2 – Terror of the scariest cows on earth!

Enter the terror of the cows! As you know from my earlier experience, I don’t like cows and these ones were stupid crazy! (See video below and please forgive me for the swearing and heavy breathing).

I felt like a gladiator who had won a battle after I got through the 2nd round of cows. My husband then called me to see if I was ok.  I felt like crying as I talked him through the trauma that I had just endured.  He laughed but told me how proud he was of my achievement (I am sure there was a hint of sarcasm there somewhere!).

I was now on a roll and I had not missed any signs for absolute ages. I climbed a massive hill and as I jumped over yet another stile onto the road I thought to myself “boy, this looks familiar”.  I had only walked nearly 3 miles in one big circle and ended up where I started.  Apparently, The Cotswold Way will often take you on a loop so that you can enjoy the scenery.  I was annoyed the signage and just pissed off in general. I was wet, boots clogged with mud and hungry. I needed coffee!

I ignored any more signs and just walked on the road and then the canal until Kings Stanley (good old Google maps!). Then I spot Bens kebab van in the distance – hot coffee was calling!

As I work my way through Stanley woods a hail storm starts. They were the size of golf balls (or more like the size of peas!), but they sounded like golf balls under my umbrella!

The last stretch was painful. My hips hurt, my shoulders were sore and my feet ached. I got stuck in the mud and nearly fell over on more than one occasion. I sat on a bench and gave myself a talking too. “Julia, you have got 2.6 miles to go. That’s less than parkrun. You can do this”.  I took the main road as I could not face any more mud and got to my Air B&B around 7pm having walked 21 miles.

The AirBnB was a little bit strange, but I will save that story for next week.

Hot bath, deep heat and an early night for me!

Posted in Adventure Journals, Blog, The Cotswold Way and tagged Cotswolds, Painswick to Dursley, The Cotswold Way, Walking in the Cotswolds
← What Is So Special About the Camino?127 Hours – Between a Rock and a Hard Place (Book review) →