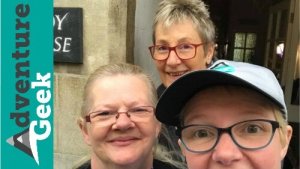 Weather: I looked out of the window this morning and sighed as it was very wet and overcast. The minute we stepped onto the trail the sun came out and we had no rain all day. Result!

Terrain: Mostly woodland with glimpses of views over Gloucester. The view from Coopers Hill (Famous for the cheese rolling) was outstanding.

The story of the day

We started the day going downhill out of Birdlip which made a pleasant change. The sky was rather overcast and it was mildly drizzling so up went my umbrella.  In all honesty, I was just keen to use my new trekking umbrella as I had not had a chance to give it an air yet!  It was not needed though as within 15 mins the sky cleared and the sun made an appearance.

We sauntered through a muddy Woodland and listened to the Jaybirds making loud knocking sounds (I thought it was a Woodpecker but Di has been educating me!)

Walking is like therapy for me. I feel a sense of peace and I merrily hop over muddy puddles and watch the sun poking through the trees.

The climb up to Coopers Hill was exhausting. How people do this without poles astounds me. Coopers Hill is where they hold the annual cheese rolling event. It is now fenced off but you can see where the unofficial event still takes place.  Who on earth decided that it would be a good idea to roll a 7-8llb double Gloucester cheese down a hill and chase after it has a warped sense of humour!  Apparently, no-one knows when it actually started, but records to go back to the 1700’s.  Our ancestors were a bit strange!

Some strange facts about cheese rolling at Coombe Hill

As I look down at the steepness of the hill, I can understand why there were so many casualties.

The Cotswolds seem to have an influx of cocker spaniels. We are seeing them everywhere, even in the pubs that we visit. Saying that Di has a little squeal as she spotted a 2-year-old beagle on Painswick Golf Course. The owner warned Di “She’s covered in fox poo” but Di was undeterred. She loves beagles and rushed over for a cuddle.

As we arrive at Painswick Golf Course I know we are in the final stretch of the day.  I am not sure about you, but I always feel awkward walking through a golf course.  Even though I know I am entitled to be there I am constantly looking out for golfers and little white balls flying in the air.  A friend of mine lost his left eye to a flying golf ball many years ago, so I am always wary.  The trail follows the golf course over several holes Until we spotted something twinkling in the trees. It was a place where people place a prayer and laminated photos of dogs that had died. I’ve never seen anything like that for animals before.

Around 1 pm we enter the small historic wool town of Painswick. I feel like I’ve walked into a period drama (and then we spotted a house called “Downton House”.  The stone in Painswick is rather grey and very light in colour, but this type of limestone is stunning.  It reminded me of a trip to Aberdeen many years ago, when the taxi driver was proudly explaining that we were travelling down millionaires avenue and I declared “why did they make the houses out of breeze block?”, he replied “that’s granite my dear, not breeze block!

The village was rather sleepy, and we were attracted by a quaint little cafe called Olivia's for a bite to eat.  The cafe had a Mediterranean feel and they served a range of Tapas and other dishes that sounded very tempting.  We settled for parsnip and pear soup, which was surprisingly yummy!

After we had refuelled, we decided to take a tour of the local area before checking into our B&B.  I also needed to look for a good hiding place for my Adventure Geek Box which I had completely forgotten about until I arrived in Painswick!

Painswick is known as the “Queen of the Cotswolds”.  But why?

The tabletop tombs at St Mary’s Church is famous for its “Clypping Ceremony” held in September (where kids perform a type of hokey-kokie to a clypping song).  This is believed to express the parishioner's love of the church.

We did spend some time in the Church of St Mary's.  This church has 99 extremely well-manicured yew trees that were planted in 1792.  It is said that every time a hundredth tree is planted it dies. Some say it was the devil that extracted the 100th tree each time it was planted.  I guess we will never know.

After Di was insulted by a local “Walking for Health” lady who assumed Di had a bus pass (a story for another day!) we found our B&B and that is where the fun started!

Our Bed and Breakfast – Troy House in Painswick

Troy House is a little B&B that we booked through booking.com.   We knocked on the door and was already in the process of taking off our boots.  My laces were at breaking point and holding on by a thread.  In a strong Newcastle accent, she said “hold on, I will grab my tin of bootlaces for you”.  She then let me select a pair of bootlaces for free.  I liked this lady already and knew that we would be looked after.  We walked through a small corridor in our socks, whilst holding our boots in one hand and our rucksacks were still on our backs.  We got to the back door and she said “ok, you can put your boots back on now”.  Di and I looked at each other and obediently obliged.  We then walked across a very pretty backyard, and to an annexe at the bottom of the garden. “We call this the loft” she explains, and the boots came off again as we entered.  As she showed us around I was in awe.  This lady was a natural host and knew what her visitors wanted.  There was a donation fridge with beer, coke, milk and a whole range of other goodies.  We had every tea-bag flavour you could think of and later that evening I indulged in a long soak in the bath using a bath bomb that was in basked of “help yourself” stuff.  Wow!

I did chuckle to myself as Denise explained the rules of the house.

Denise has been a local for many years and knew all of the pubs in the area.  She gave us her opinion of which ones were expensive, which ones were good value and generally pointed us in the direction of The Royal Oak Inn.  We sat quietly in the corner and devoured our homemade burgers whilst being entertained by the local K9's.  I am not sure if it is part of the Cotswold culture, but everyone who has a dog tends to bring them into the pub.  We found this in Birdlip and also in Charlton Kings.  They wander around the pub freely looking for crumbs on the floor and some fuss from the pub customers.

We were snuggled up in our spotlessly clean twin beds (although I had the double all to myself) by 9pm and I know that I was fast asleep by 10pm.

I would highly recommend staying here, no wonder Denise won “Four in a Bed” the English TV series.

Tomorrow I am on my own and I am rather nervous.

Posted in Adventure Journals, Blog, The Cotswold Way and tagged coombe hill, Cotswolds, painswick, The Cotswold Way
← How Many Miles or Kilometres Should I Walk on The Camino Every Day?What Is So Special About the Camino? →