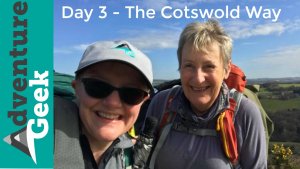 Weather: Absolutely lovely. Sunny, clear skies so we could see for miles.

Health: I think I’ve found my trail legs. My shoulders are a bit sore but everything else feels fine.

Read below for the full story of events.

The story of the day

Our fantastic Airbnb host Fiona drove us back to the trailhead after feeding us with a full English breakfast (I love Airbnb- why have I never used them before?).

One word for the first hour… UP!  Then UP some more.  Then a bit more UP that included some steps which I assumed were built to help, but if you are as short as me then it was friggin painful! Giant steps, but not for mankind.

After we exit Lineover Wood, I find myself climbing yet another steep hill.  We finally reach the summit of Wistley Hill (971 feet) a little out of breath, but I am feeling on top of the world. We take our packs off and stop for a well-deserved rest.  I enjoyed chomping away on my malt loaf and Diana was very healthy and enjoyed a fresh orange.

My shoulder was causing me some concerns (i've never had shoulder pain from hiking before). Di suggested that I pad my shoulder with my buff… brilliant! I didn’t moan again for the rest of the hike. (Thanks Di)

Going up is not much fun, but it’s so rewarding when you take a minute to turn around and look where you’ve come from. 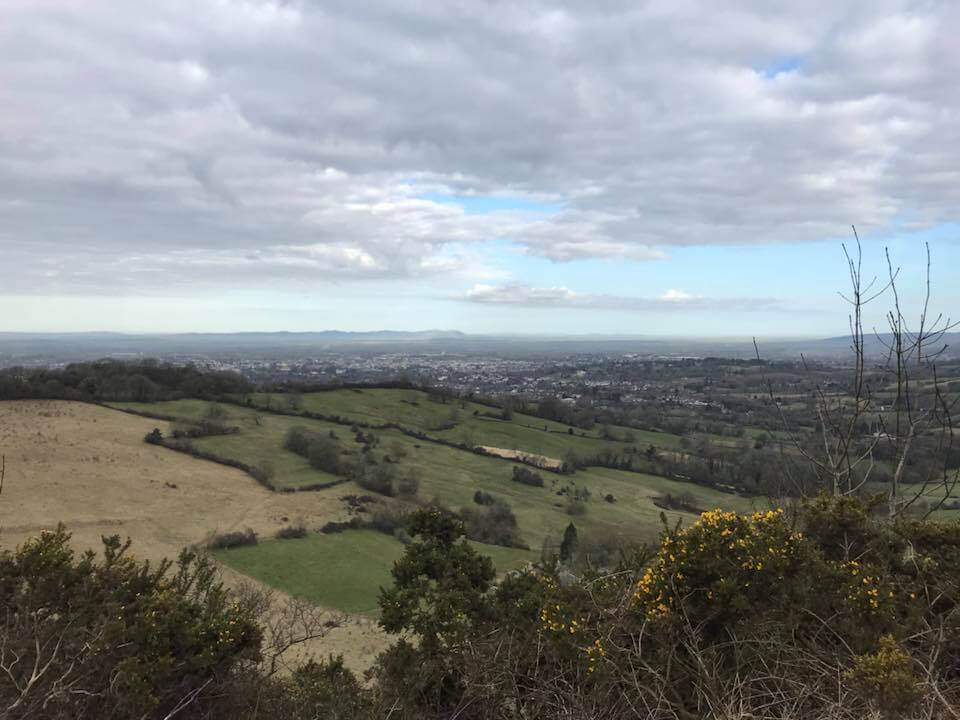 We spotted the first Primroses of the season (now I know what a primrose is!). I also learned that gorse smells like coconut. Every day is a school day on the trail.

Along the escarpment, we stopped to chat with a man who was walking a cocker spaniel. He enthusiastically told us that the whole area was filled with Adders and his dog makes a weird noise when he gets bitten by one. This filled me with horror and the next few miles I lost count how many sticks I saw what looked like a snake! 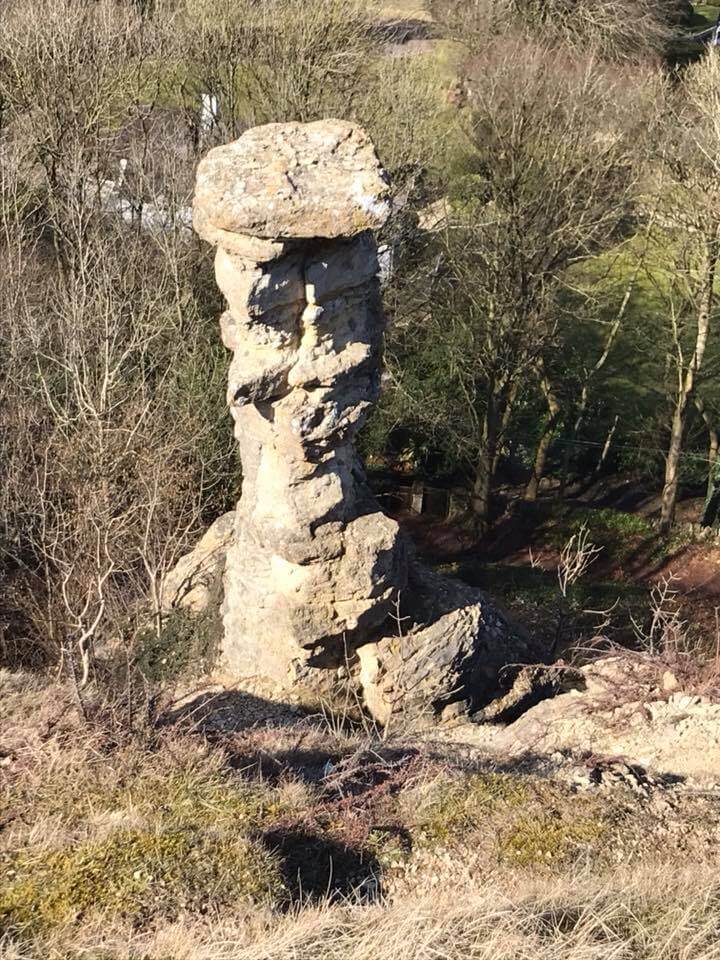 In all honesty, it took us a while to find this famous monument.  It was not within the park and we had to ask for directions, but it was worth the visit.  Devils Chimney is a limestone rock formation, which has survived an earthquake in 1926 and was repaired in 1985.

Myth:  Local Legend holds that the Devil’s Chimney is the chimney of the Devil’s dwelling which is deep in the ground.  The legend stipulates that the Devil would sit atop Leckhampton hill and throw stones at the Sunday churchgoers.  They say that the churchgoers would throw the stones back at him which made him retreat beneath the ground.  He uses these stones as his chimney to let the smokes of hell go free. People are said to have left a coin on the top of the rock as payment to the Devil in exchange for him staying underground.

Did you know: The record for people standing on top of the Devil’s Chimney is 13, although this is now prohibited.

Devils Chimney was a strange looking landmark, so Adventure Geek Box number 3 was hidden in a gorse bush nearby.

Isn’t it strange the things you talk about on a hike? Di and I chatted about our dislike of thongs for a good 30 mins (and other underwear).

We stopped for lunch at 2pm at Crickley Hill. Sat on an old beech tree enjoying the view and caught up with fellow hikers from Leicester.

The most dangerous part of today’s hike was trying to cross a busy main road by the Hot Air Balloon Pub before making our way into Birdlip.   The Air Balloon Pub was a great attraction but Birdlip was calling so we didn't stop for a quick pint.  Instead, we traipsed up and down the road trying to figure out where the signs were for The Cotswold Way.  The angle of the sign at the pub meant it could be one of two ways.  We finally got out the paper map and figured out where we were going.  Another 200 yards along the busy main road we spotted the next sign for TCW and breathed a sigh of relief.  We had not yet lost our way today and I didn't want to break that momentum just yet!

From the pub, the Cotswold Way takes me on a route across Barrow Wake. I can see the Vale of Gloucester in the distance as well as May Hill and the Black Mountains.  The view is stunning and I feel honoured to be here.

The last part of the journey was through beautiful woodland.  Kids had made dens which took me back to my childhood days.  I walked on my own for this last section, with Diana's orange pack bobbing around in the distance.  I always had her in my view, but she has a longer gait than I and she tends to walk faster.  I also stop to take many more photos and videos so I am often behind others.  That is one of the beautiful things about the hiking community.  It doesn't matter if you want to walk with people and chat, or if you want to spend time on your own.  It's important that you hike your own hike.  Walk at your pace, enjoy the things that you want to stop and observe.  Your fellow hikers will catch you up, or you will catch up with them sooner or later.  Just enjoy the journey.  That's what it is all about.

As we climbed up (our last hill of the day) into Birdlip we were greeted by an extremely busy pub/hotel – The Royal George.  I have no idea why it was so busy as Birdlip was a dinky village that did not even house a newsagent, let alone a shop.  We took our muddy boots off and checked in.  The lady behind the counter supplied us with newspaper for our boots so that we didn't get their carpet dirty (good idea!).  I enjoyed a nice long soak in the bath and added some deep heat on my shoulders (a smell that Diana would be getting used to in the coming days).  We ate a meal in the pub restaurant and then went for a walk (ironic!), to explore the village.  This took us about five mins.  We did have a giggle when Diana tried entering the front door (which was not the front door and she gave the people who were sitting eating a meal a bit of a fright).

Another great day on the trail. Rain tomorrow…!

Posted in Adventure Journals, Blog, The Cotswold Way and tagged Birdlip, charlton kings, Devils Chimney, TCW, The Cotswold Way
← How to Cope With The Pilgrim Song (Snorers) On The CaminoHow Many Miles or Kilometres Should I Walk on The Camino Every Day? →